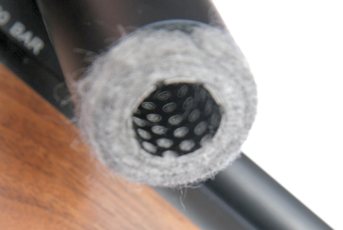 A&M Custom Gunsmiths design and produce the highly acclaimed ‘Twink’ Silencer, an FAC-rated air rifle can that catapulted master craftsman and co-owner Adrian Waugh into the spotlight.  He’d previously tweaked and modified air rifles for club members, which soon had him known as the guy to see if you wanted something special making.

He soon had a lathe and a milling machine and decided to make his own PCP, which after a few prototypes is the talk of the HFT circuit. That in itself is a whole other article but leads me to look at the silencers A&M custom house supply.

The moddies have a 1 ½” O/D with ½” UNF female thread so you can spin them onto the majority of air rifles. The Twink is approximately 6 ¾” long and the bruiser of the bunch, the Marksman pushes the tape to 9”. There’s also a smaller model aptly named the Titchy.

Casings are CNC manufactured usually from a single billet of T6 aircraft grade alloy, while internals are all-aluminium or Delrin. However, the Twink has stainless steel baffles and its design eliminates the dog whistle effect some produce. Baffles are concave, but the 8mm aperture stops pellet distortion without compromising effectiveness. Very quiet even at hi-power as it has been tested on air rifles up to 400 ft lbs.!

As with the other cans all internal components, except contact points, are surrounded with a special ‘sound deadening felt’ – Adrian gave away no more information, suffice to say it has taken a long time to source and test the material.

The proclamation ‘AVAILABLE VIA DAYSTATE’ on their website is the major indication that the ‘Twink’ is recommend for many FAC rifles the ‘supergun’ manufacturers produce. With a hard case anodised satin black finish the Twink is cosmetically appealing, and equally as efficient. Tried on my most powerful 60ft lb air rifle in .22 cal it made a remarkable difference.

Though I didn’t have the Titchy to test I know it uses a similar but obviously smaller internal noise reduction system to the Marksman so I’ll quickly move on. The Marksmen holds two sets of aluminium honeycomb baffles and spacers. Combined with concave Delrin washers all are a very tight internal fit and precision sized so when assembled they contact the inner bore fully and concentrically for anti-resonation.

With much more ‘still air’ to use, when the pellet exits it leaves a lot of air that would be usually expelled left to swirl back and dissipate within the baffle assembly and main chamber. It’s so large because it was initially built for the .25 calibre but has taken off with many CO2 pistol and rifle enthusiasts as it reputedly reduces sound on discharge by up to 75%! A & M also specialise in custom stocks, lightweight HW100 air reservoirs, most custom work and repairs, stock refinishes etc.