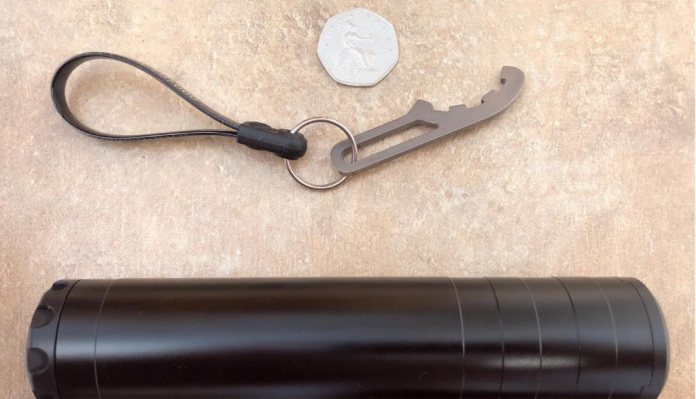 UK Custom Shop have built a fantastic reputation over the years for their extensive range of moderators. One of the most recent variants is the Panther, a can designed for .22 and .17 calibre rifles, but unlike its stablemate the Whisper, it can be used on small calibre centrefire rifles, such as .22 Hornet, generally those that use under 20-grains of powder.

The O-ring sealed unit consists of three main components; a black anodised alloy body tube 38mm in diameter and 155mm long, a beautifully machined, single-piece baffle stack (diffuser) complete with a stainless-steel threaded section that attaches to the rifle’s muzzle and finally a threaded end cap/inner sleeve than mates with the diffuser and holds everything together. Assembled, the Panther is 168mm long and sleeves over the barrel by 55mm.

The purple anodised diffuser (silver in .17) is a very complex shape and has six holes machined just after the end of the barrel that divert gasses back into the body; other gasses travel forward through 66 more holes and the combination of ports and internal volume slow the gasses before they leave the end of the unit.

Stripping is very easy, as the rear end cap is notched around its circumference and it is simply unscrewed; a handy tool is included, which is useful should cleaning not be carried out on a regular basis and the components become clogged. .22 LR ammo isn’t exactly clean burning and bullet lube and powder fouling can quickly build up. Everything is superbly made on CNC machinery at Wildcat’s premises in Worcester and I really can’t fault it in any way. The Panther can be purchased with ½-inch UNF, ½-inch UNEF, 14mmX1 and 15mmX1 threads, so should cover most applications.

I intended to first use the Panther on my customised Ruger 10/22, but as I’ve had the barrel shortened, it wouldn’t quite fit, due to the rifle’s forend stopping it screwing on to the barrel. A call to the ever-helpful Alison Green soon had a stainless-steel extension sorted – once again, excellent service! Whilst zeroing the rifle, the discharge sound was very muted, especially with subsonic ammo and muzzle flip was also reduced.

A trip to a particularly noise sensitive shoot after a couple of bothersome foxes ended very successfully with two foxes called in and taken at 15- and 16-yards! Livestock in a nearby field was not at all bothered by the sound of the shot, so the Panther certainly did the job!

When I used the Panther on my .22 Hornet calibre Anschutz, I hardly noticed any difference from my larger Wildcat Evolution but the mod weighs under half, which is a real bonus when out with a bipod and lamp fitted. The rifle balances much better too, less muzzle heavy; so, another benefit of this new design.

Another quality moderator from an innovative UK company that’s great value for money at £149.