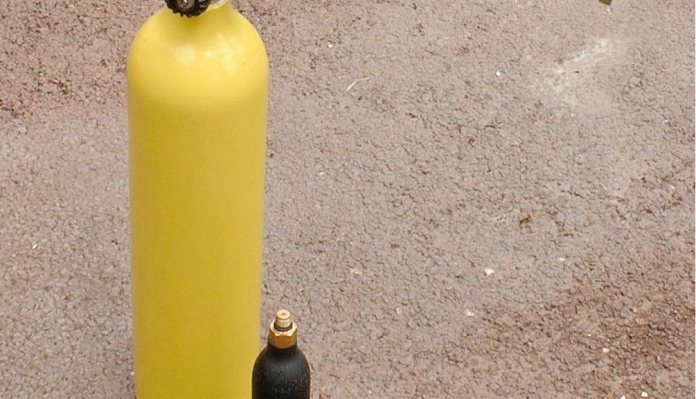 Pneumatic air rifles, or PCPs, are the most popular type bought today. Using a compressed air system to power the projectile, they are consistent, accurate and practically recoilless. We see compressed air used in all sorts of ways in our day to day life. Clean, odourless, and non-flammable, it is basically a very safe way of powering tools or in our case, rifles.

Probably because of this, many people buying and using PCP’s have no conception of the potentially hidden dangers of compressed air; both in using or storing it - in the quantities and pressures required to feed a PCP. Without some knowledge and respect for the equipment we are handling, this fundamentally safe form of power storage can turn around and bite back in a big way! It amazes me that in the many years I have been using a PCP, I have only read one dedicated article about filling equipment and that was in this magazine a few years ago.

In the early 1990’s I had the unfortunate experience of being within 20yds of a PCP that was being filled when it exploded; literally! To my knowledge, this has been the only documented case of this type and was traced to a fault in the aluminium used to make the pressure tube on the rifle. Fortunately, the shooter was un-injured but the rifle was completely wrecked and in pieces.

I must admit that it made me, and everybody that day, much more aware of the potential dangers involved with our equipment and the need for some basic knowledge in the safe handling and storing of compressed air. So read on!

Talk to any engineer about your pneumatic rifle and watch his reaction when he is made aware of its operating pressures, which can be in excess of 2000psi, usually 3000psi if a reasonable amount of re-filling is expected. Our legal rifles produce up to 12 ft/lbs of energy at the muzzle. A 12 litre cylinder used for storing and charged to 3000psi, has a kinetic energy potential of 1.3 MILLION ft/ lbs! Enough to lift a Jumbo Jet into the air!

Your normal garage type compressor will give maybe 100psi of pressure, 150psi if it is a good one. The air it produces also contains moisture, loads of it! Even if you could produce the pressures required to fill a PCP, the moisture would ruin the internals of the rifle in no time at all. So we need to use ‘dry air’, the type that divers and firemen use in their breathing equipment. In compression systems providing air for this type of kit, the moisture is removed from the air before it gets into the cylinder. Under no circumstances should anything other than dry compressed air be used. I know of two instances where shooters have tried to fill bottles from Acetylene cylinders… In one case combustion took place as the oxygen from the Acetylene heated up during transfer resulting in a melt down inside the rifle!

Anyone owning a PCP will need a supply of compressed air with which to fill it. Although hand pumps are available, by far the most common storage method is a compressed air cylinder. This can be filled at a diving equipment shop or various Fire & Safety (industrial gasses) outlets in your area.

The majority of PCP’s are filled directly from a large cylinder into a fixed cylinder (air reservoir) on the rifle. Usually, this large cylinder will be the type used for diving. Some non-diving types, such as Fire Service breathing apparatus, are also available from compressed air suppliers. They are made from either steel or aluminium.

This means that when filled, we have a pressure of around 3300psi in our cylinder.

Larger cylinders are available but this does not necessarily mean that you get more pressure. It could be 15 Litre rated at 232 bar (safe working pressure) for example. Conversely, a smaller 8 Litre cylinder could be rated at 300 bar or more. All this information and more will be stamped on it. More of this later. The problem with cylinders over 232 bar from a PCP owner’s point of view is primarily one of safety.

Most PCP’s are designed to operate anywhere between 1800 and 3000psi depending on model. (Some of the new Walther FT models operate up to 300 bar). With a 232 bar bottle there is never any danger of exceeding the rifle’s safe working pressure, even if over-filling by mistake. All it would mean, in the case of a basic non- regulated ‘knock open valve’ PCP with a recommended fill pressure of around 2000psi or 150 bar, is a reduction in muzzle velocity until the pressure came down to the designed operating range. In regulated models it would just mean more shots at the set velocity. With a 300+ bar cylinder, the danger of over pressurising as opposed to overfilling is always present, particularly after a re-fill of the cylinder.

Although all rifle air cylinders undergo rigorous testing, they are not designed to be overfilled to ‘test’ pressures on a regular basis. A good friend of mine who does custom work on rifles recently had one brought to him by a puzzled owner who could not shoot it after filling from his cylinder.

After trying the trigger and nothing happening, my friend attached his 232bar cylinder to the rifle to introduce some air. Upon turning the fill knob, the gauge immediately shot up to the stop, way above 3000psi. The rifle had in excess of 4000psi stored in its cylinder. So much so; the hammer could not open the valve due to the pressure. This chap had filled from a 300 bar bottle and kept on filling it until the pressure equalised. In other words, until it stopped filling. Remember the Jumbo Jet!

Had this rifle decided to let go, he would have been the first English astronaut launched from British soil! Without wanting to sound paranoid - I cannot emphasise enough the need for a healthy respect towards the pressures we are dealing with here. Quality PCP’s are tested in excess of 300bar but this is to ensure safety; never fill your rifle above what the manufacturor recommends.

Some rifles (Theoben Rapid, BSA RTEN, etc.) have a small removable cylinder with a capacity of between 200 and 400cc. These are sometimes referred to as ‘buddy bottles’ (a term taken from the diving fraternity). These can be unscrewed from the rifle and ‘topped up’ by de-canting air from a larger storage cylinder or taken to a shop for filling direct from a compressor. They are small and light, allowing the owner to carry one on the rifle and a spare if required, ideal for the hunter who needs to travel light. It also allows the bottle to be easily removed for periodical testing – unlike some ‘fixed’ cylinder rifles.

Because of the potential danger involved, there are regulations involving the testing and inspection of compressed air cylinders. A lot of these apply to the workplace and fall under the Health And Safety At Work Act, the Carriage Of Dangerous Goods Act, and Standard EN 1089—Gas cylinder Identification which is to do with the colour and/or marking of the cylinder.

As a private owner, certain regulations may appear ‘over the top’ or not applicable, such as the colour of the cylinder and labelling as to the contents, but remember that whether you like it or not, when carrying a pressurised cylinder in your vehicle you fall under the Carriage of Dangerous Goods Regulations (1996). Meaning it should be either painted in the correct colours, i.e. Black and White quadrants on the shoulders, or clearly labelled as to its contents, or both. In the event of an accident the cylinder can be quickly and accurately identified by the Emergency Services.

Although unlikely, a filling station can refuse to fill a cylinder that is not correctly colour coded. In practice, the chap in charge will be more interested in the stamped markings on the side, as these show the last test and inspection dates, as well as its safe working pressure. Without a current stamp on it, your cylinder will not be able get filled!

Let us look at the latest European standards for cylinder testing:

It will fail in the case of:

All cylinders must also be pressure tested every 5 years. An extensive pressure test is conducted on your cylinder and it is duly stamped on the shoulder, showing who tested it and the date it was done. Without this stamp you cannot legally fill the cylinder. You will be refused a re-fill if the 5 year period of inspection has elapsed.

The above regulations apply to cylinders above 0.5 litres capacity. This is initially measured with liquid to ascertain its volume. However, in the case of ‘Buddy Bottles’ which invariably fall under 0.5 litres, and, if de-canted at home never go near a filling station, the regulations state that they should be tested “where practically possible” under the European standards for cylinder testing mentioned earlier.

The onus is on the owner in this situation, but think about this: It’s a fact that some PCP’s that use the removable ‘buddy bottle’ system are well over 5 years old, some may be double that. How many of these have been tested since being bought from new?

This also begs the question: If removable cylinders need periodic checking, what about my fixed cylinder PCP? It is my humble opinion that commonsense, coupled with a sense of self preservation should denote when it’s time to take either of them for a pressure test! Put it this way: If you are in company when a cylinder decides to ‘let go’ injuring a third party and that cylinder is found to be defective through negligence, in this compensation crazy society that we live in today your feet wouldn’t touch the floor!

The Paintball fraternity have a system in place at their gatherings whereby cylinders are checked before games commence. Any found to be ‘out of test’ are not allowed to be used at that meeting or any subsequent meeting until inspected and passed. Maybe we can all learn something from this!

It’s not all doom and gloom! It is worth noting that cylinders actually used for diving suffer a great deal more wear and tear than our PCP cylinders. Apart from the salt water treatment that diving cylinders get, they also get emptied before refilling. This is not the case with PCP’s, as once the pressure inside gets below 1600psi, it isn’t enough to give us a reasonable charge and so it’s off to the shop for a ‘top up’.

What this means to the PCP owner is very little internal condensation. Due to the pressure still inside the cylinder, condensation doesn’t form. This in turn means a much longer usable life, particularly the steel ones. It also means less condensation is transferred to the rifle during a fill, be it a steel or alloy build. Even though the air is known as ‘dry air’ and is rigorously filtered before entering filling, it is impossible to filter all moisture but the amount that gets through under normal circumstances is not harmful to your rifle.

It also pays to go to the same shop for your fills. Many of the recommendations the air supplier works under require a common sense approach. Any serious problem arising from a cylinder they fill will come right back to them!

If all this sounds like a lot of red tape, in reality it is only a sense of awareness and responsibility that we really need to concern ourselves with when dealing with compressed air cylinders. The same sense of responsibility that prevails within other sections of the shooting fraternity through an obvious danger - such as handling live ammunition. Treat it with respect and be aware of the potential dangers involved.

Hopefully, the information above will help sharpen that awareness. Next month I will look at the confusion of fittings on the cylinders/rifles and correct filling procedures. I’m off to get my cylinder tested!