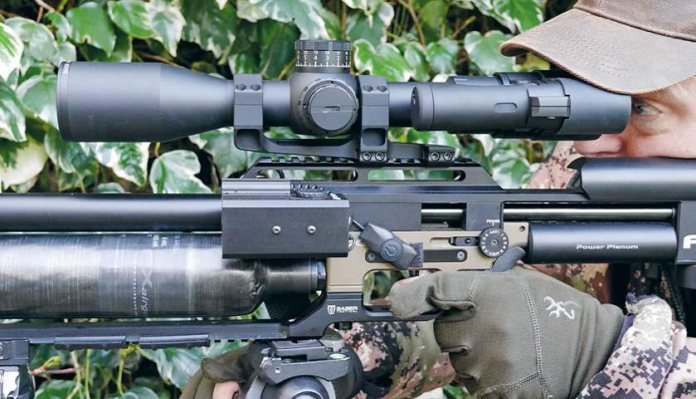 As action cameras have become smaller and more capable, and as social media has made it even easier to share our experiences, we shooters have increasingly looked for good ways to record what we do. Adapter systems from Side Shot and Eagle Vision that let users film through their day scopes with standard digital cameras, GoPros or phones have been a good start, but are either expensive, bulky or fiddly, sometimes all three at once!

What Tactacam’s 5.0 bullet camera and FTS (film through scope) adapter promise is a system purpose-built for shooters that is lightweight, rugged, easy to set up and instinctive to use, giving you great results on video without compromising your core business of making successful shots in the field. This review will explore how well the Tactacam system delivers on that promise.

Before we start, it’s worth saying that recordings of hunting shots come in two primary flavours: impressive ‘bang-flop’ kills, which are great to share, and ‘learning opportunities’, which may be best kept to ourselves. But even when things don’t go the way we want, a recording of the shot is a unique resource for diagnosing faults in our set-up, or delivery and for identifying whether a target animal was missed or wounded.

While testing the Tactacam, for example, I shot a roe doe with a 150-grain .30 cal bullet at 130m. The shot felt good, but the deer ran 150m across a field and through the hedge on the far side. Reviewing the video revealed my aim had been slightly low, sending the bullet through the chest at the brisket. It also confirmed my reference points for the strike site and where the deer left the field. As a result, after a restless 15-minute wait, I was able to make an easy track, quickly finding the deer dead a short distance beyond the hedge. Could I have done this without the camera?

Yes, but the wait would have been more anxious, and the track more doubtful.

The Tactacam also comes in useful when target shooting, since you can link it via WiFi to a smartphone or tablet, allowing a buddy to spot for you in realtime and enabling you to record each shot for an instant replay if you’re alone. Tactacam also does a dedicated spotting-scope camera, the Spotter LR, that enables you to make use of the higher magnification of your spotting scope in the same way. However, that’s a subject for a future review.

The Tactacam 5.0 camera itself is cylindrical, 110mm long and 31mm in diameter, plus weighs just 42-grams. A black soft-touch coating avoids shine, aids grip and complements most scopes. The lens is well protected by a clear polycarbonate screen, while at the rear there’s a pinhole for the waterproof microphone and a twist-open tail-cap that provides access to the battery compartment, where you’ll find a Micro SD card slot, plus Mini USB and Mini HDMI ports. Inside the end cap is a handy colour-coded reminder of the camera’s three preset modes: standard (green = 4k @ 30fps), zoom (purple = 2.7k @ 30fps with 8x Zoom) and slo-mo (blue = 1080p @ 120 fps).

The rechargeable battery is half-cylindrical in shape, gives a recording time of 2.5 hours and has a small tab on the end to aid removal. Too small. I have four batteries and two fit so tightly that without something to hook into the tab, they won’t budge! The locking latch on the tail-cap is tiny too, as are the white ‘locked’/‘unlocked’icons alongside it, which are a greater test of eyesight than I can pass.

Fortunately, the two control buttons on top of the camera are more sensibly sized. The Rec/ Power button activates the camera and then initiates/ halts the recording. The second toggles between presets (helpfully changing colour to indicate the mode selected) and activates the WiFi via a long press. Ahead of the buttons, battery status is indicated by four tiny green LEDs. With an SD card installed and the camera activated, a quick press of the first button starts a recording and a second quick press stops it.

Each action is accompanied by both haptic and visual indicators: an initial double vibration and a continuously blinking green light when recording, and a single confirmatory buzz and a constant green light when paused. A long press of the Power/Rec button powers the camera down, but if you forget, it will shut down automatically after three minutes to save the battery. That’s the kind of idiot-proof I like!

When filming at night, you can also put the camera into a ‘Blackout’ mode, which cancels the lights and leaves just the haptic single/ double buzz indicators.

To transfer files, you can either plug in a USB cable or pop out the Micro SD card, but the most flexible way is via the WiFi link and smartphone app. As well as letting you view, download and share files, the app lets you customise each of the camera’s operating modes from a menu of resolution levels (4k, 2.7k, 1080p, 720p) and frame rates (240, 120, 60, 30), and even tweak the exposure settings (EV -2.- to +2.0). A little experimentation will show which works best in each case.

Generally easy to use, the app has one major drawback, at least in its Android form, which is that it will only share data with the camera if you first disable the SIM or turn off mobile data. This problem isn’t unique to Tactacam, but it is also inconvenient, avoidable and overdue for fixing.

The camera comes preloaded with a PDF copy of the manual and instructional videos, but it doesn’t come with an SD card, so you’ll need to buy one separately. For best results, invest in a high-quality card that’s Class-10 or above, with up to 64Gb of space.

Charging can be done via the USB cable with the battery installed. Charge time will depend on the power source (mains, etc.) but is around 3-4 hours. You can also buy a dedicated battery caddy that holds two batteries and features a modern USB-C port as well as the legacy Mini USB interface used on the camera itself. It’s a good way to keep spare batteries handy, safe and ready for use, especially since batteries don’t retain their charge if left in the camera between uses.

Tactacam also offers a host of ways to mount your camera, whether to yourself (shoulder or head mounts), to your surroundings (bendyclamp, EZ-aim, stealth, tree or universal mounts) or to your chosen tool, be that a bow, crossbow, shotgun or rifle (Picatinny rail, underscope, scope or barrel mounts). On test here is the FTS (Film Through Scope) mount, which lets you do exactly that, and is currently being offered as a combo with the camera at a very attractive price of £399.95.

The FTS mount comprises two parallel barrels: a smaller one for the camera and a larger one for your scope’s ocular bell. A perfect fit between scope and mount is achieved via a set of seven numbered plastic bushings that also protect the finish of your scope. Inside the mount is a prism that splits the image, sending a duplicate of what you see into the other side of the mount, where it is picked up by the rearward-facing camera. You can set up the mount with the camera on either side of the scope. This accommodates most rifle/ scope configurations, but you can set it up at any angle, simply rotating the camera within the mount to square up the reticle. However, this may obscure the Wi-Fi and battery-status lights. Once everything is as you want it, snugging up the hex bolts on each barrel keeps it there.

In the field, the Tactacam-FTS combination is surprisingly unobtrusive when it comes to bulk and weight, and couldn’t be simpler to control. If you can see it in the scope, the camera can capture it. A couple of things are worth noting, however. Firstly, until your head is down in the eye-box, the camera will pick up a reflection of the scene behind you. Secondly, even at 4K, the recorded image is more informative than impressive. That is, you can see where the shot went and what it did but you won’t be wowed by the brilliance, colour or clarity of the image. If the latter is what you’re looking for then it’s worth trading compactness for camera performance. However, if like me your primary aims are practical - i.e. post-shot analysis, whether on targets or live game - then the Tactacam is a solid choice.

In conclusion, the Tactacam/FTS mount combo won’t win you any BAFTAs. Instead, it gives you action replays on tap in a rugged, unobtrusive, affordable and genuinely easy-to-use package.