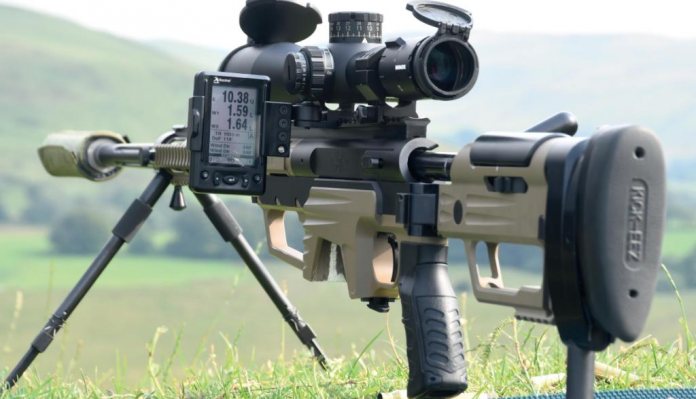 Kestrel’s range of atmospheric measuring kit has always been a great aid to shooters. Yet with various evolutions including continually improving ballistic computers, it’s now THE item for serious long rangers to use. The 5700 Elite has been around for three years and unlike some devices that need regular function updates, it has stood firm with just additional ballistic coefficient research updates so it’s looking no less dependable now than upon first release.

However, it needs to keep it pointed into the wind, constantly updating firing solutions. Although it could be paired to a smartphone or tablet for display from its automated durable outdoor wind vane, these aren’t very tough, so Kestrel has released the Wireless Head Up Display (HUD). This means you can place the Kestrel into its cradle to self-align with the prevailing wind and still update distance from the HUD without upsetting the continuous computational process correlating the wind direction and strength with the target direction.

The HUD is not a stand alone unit and will only work when paired with a 5700 Elite, but importantly, once set up following simple clear instructions, the two pair seamlessly every time they are turned on together. It’s water/dust proof, drop and recoil tested to ensure that once clipped into its mounting, it will not fail you. An Energiser Lithium battery is supplied for long operation life with the large 64x42mm non-reflective screen in black and white displaying the required details in small or large font formats.

Kestrel’s proprietary mount screws to the Picatinny rail of any suitable rifle and importantly does not need the scope removing to fit it, so no loss of zero. It splits either side of the scope so fast to swap from one rifle to another in cooperation with the fact your Elite holds multiple rifle setups in its memory already. The mount folds flat against the scope with the HUD removed and that will store neatly in a supplied drawstring bag for transport. A 3-button remote control is supplied that aligns with an L shaped connector so you can replicate the rubber button functionality elsewhere on the rifle for less visible movement. But, for the civilian market, the five rubber buttons on the base of the display are tactile to operate in gloves at any temperature without direct vision, unlike touch screens.

If you are familiar with Kestrel’s 5700 Elite already, the functionality will be intuitive for setup of rifle, range, target choice etc. The ELITE still needs manually setting up before shooting to magnetically orient its own internal compass for target direction. But after that, other external variables can be changed within the current gun’s present ballistic curve from the remote. Main options here are single target screen in regular or large font, displaying live updates of windage and elevation corrections for the single target in accord with the live data feed coming in from the Elite. A single target screen can also be used to display the target with various max/min wind value options, although I preferred the former with live updates. A DOPE card will display all ballistic settings for range on one screen in chosen distance intervals to help quickly analyse and compare various cartridges in your Elite’s database. But other than the main screen with real-time data readout, I like the option of a stage timer, which for competition use will count down through stages like a PRS shoot, keeping you aware of the stage time expired.

Custom Target Card Screen allows viewing up to 10 targets without ever coming out of the scope. Here, your left or right eye is used to stay alert, somewhat multitasking and with complete ambidextrous mounting on the rifle with symmetrical button layout, Kestrel shows no favourites. My eyes are starting to get a little less able to focus over short distances, the joys of age, so I especially appreciated the large font option. Giving a clear and uncluttered layout showing setup details in smaller text with all live updates far bolder towards the top of the screen. Of course, a Picatinny rail allows it to be set where you like, and I favoured as far forward as possible.

If you don’t have a rail, Picatinny mounts for regular scope tubes can be improvised for the HUD but I suspect it’s the kind of kit that’s mainly aimed at and appealing towards those already within a Picatinny environment for accessory mounting. It’s also designed to be read in direct sunlight and I had no problem seeing it or photographing the display which is a regular hiccup on most screens.

I liked the HUD display and was not surprised to find it intuitively functional, coming, as it does from Kestrel, who know what, real world shooters want. OK, it’s no magic solution for all down range wind conditions, those familiar with the system’s benefits and functionality will already know if they like its functionality already. It’s worth pointing out that ANY of the measured variables, like temperature, humidity etc are still ticking away in the background too and for long shots, the rapid appearance of cloud cover can have immediate effects on ballistics.