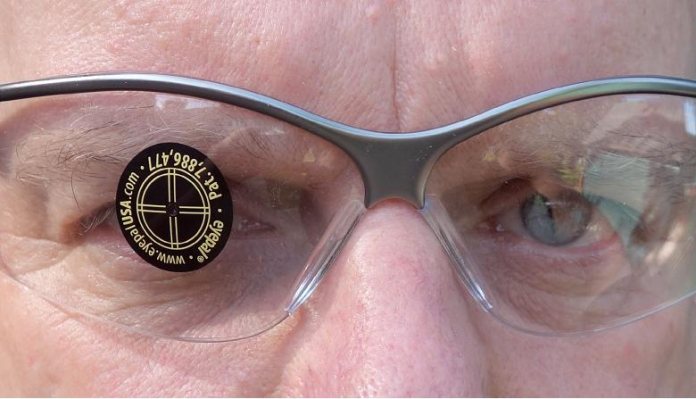 I must admit that, when I was contacted by Peter Moseley from the company Tactical Scope about the Eyepal Peep Sighting System, I was a little skeptical that such simple device could be quite as effective as he said it was. I’m not saying he was trying it on in any way but I’ve seen all sorts of products over the years that have made elaborate claims. Well, after testing it for a while, I can honestly say that everything he said is true!

The product has been designed to enable shooters with less than perfect vision to use open sights effectively. I’ve noticed over the last few years that I can’t quite get the open sights of a pistol in focus like I used to. The U-notch rear and blade foresight are a bit fuzzy these days, especially when the light levels are low and I’ve been thinking about investing in a couple of scopes for my favourite pistols; I won’t have to spend the money now!

The Eyepal is a Patented device that attaches to your shooting glasses. It’s essentially a non-marring piece of ‘static cling’ material (think of it as a sticker that’s not actually sticky!) with a small hole in the centre and it’s placed on the part of the lens where you would normally look through whilst shooting. The hole acts like a ‘pinhole camera’ and the resultant image is that of the sights and target being in focus. I can now get the foresight centrally in the rearsight, without any blurriness and the target is in focus like normal. It’s possible to use the Eyepal with either one or both eyes open and it really has improved my shooting.

The Eyepal can be used by pistol/bow and rifle shooters and there’s one of each in the ‘Master Kit’, or two of each type in the ‘Handgun/ Bow Kit’ and ‘Rifle Kit’. At £19.95, it is very good value for such an effective product.