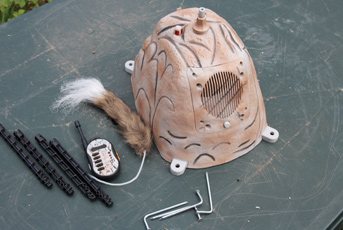 In the old days it was simple; you made a noise on the back or front of your hand by pressing your lips to it and blowing/squeaking to try and call in a fox. With practice it worked and I’m sure many others have had reasonable if not good success as I have. It’s always a buzz as you’d see the eyes, squeak and the next minute the target comes into rifle range; well sometimes!

As with all things, shooting technology moves apace and not long after the first basic electric fox calls appeared. Essentially recordings of small animals – rabbit, hare etc. in distress and maybe cubs yipping and vixens screaming in heat. They too worked, though over use, which for novices read leaving it on blaring away all night soon educated Mr & Mrs Charles about things that made strange noises in the night. Like most of us I have had mixed success with these. Possibly my most memorable moment was down in Bath on my friend’s farm. We saw eyes with the lamp at about 400 yards, I switched on the call and one set just took off towards us at high speed. I rolled it over at 100 yards with my 223 WSSM and it turned out to be a big old vixen – gotcha!

So they worked well enough but soon the arms race began in earnest with a plethora of bigger and better predator calls mainly from the USA. No one can disagree that foxes in general are smart and will learn quickly if they are lamped or called and get shot at but not hit. With too many hobby foxers using too many calls results took a down turn. I guess this must have been the same in the States as other combinations were now being tried.

Foxes being curious will tend to go and investigate unusual or even familiar looking things; with this the generic wiggler was born. A simple unit that placed a mock strip of fur or even a whole fake rabbit or similar that looked enough like the real thing on an electric motor drive that randomly turned it. At fox height it must have looked interesting. Equally scent lures were tried out with the smell hopefully attracting Charlie into shooting range.

Well the culmination of this seeks to combine sound, sight and smell so stacking the odds well in your favour in the form of the Cass Creek Wiggler. It’s without doubt an odd looking thing that I think the manufactures thought looked like a rock. At 11 x 8 x 8” its brown with black lines painted on it to make it look authentic. However it’s four, peg-down points make it look more like a ‘tall tortoise’! But out in the field as they intended it does look like any other small rock, certainly at shooting distance.

This box of tricks is self-contained and offers three enticements systems that work alone or in conjunction with each other. On top and giving it its name is the decoy (waggler) which consists of four, 6” plastic rods that connect together and what looks like a fake fox’s tail with a flexible wire/polymer rod for fitting. With 4 x 6” extensions on and coupled with the height of the base you can raise the flag up to 32” above ground level for clear observation for the fox if required. There are grills at the front and back of the unit with a speaker behind one for the 10-call functions available: female howl, baby crow, food fight, lost fawn, beta male, hare, adult cat, fox pups, cotton tail and jack rabbit. The other is for the scent dispenser. This consists of a removable grill that covers a fan, here you place a pad of material with the scent on it and the fan blows it in the direction you have set up. All of these function being accessed and used by a small remote control.

The Waggler is powered by three, old school 1.5 V batteries, you know the big, old D-cell types, they drop into the base next to an inset ON/OFF switch. When ON a red light on top glows, there’s also a re-set button on the front as the Waggler if it has not received a signal in 2-hours goes into sleep mode. Opposite the battery compartment is the accessory box, this holds the four extensions, four ground spikes (well - bent nails) and the decoy/tail. There’s also a carry handle in the bottom so it’s easy to shift, not that it weighs much!

The remote is small with a fixed aerial and powered by 2xAAA batteries, with a screw holding the cover on. There’s a small ON/OFF switch on the left with twin volume buttons (UP/DOWN) on the right. The front face holds the five multi-function buttons and three, illuminated selectors.

Each button controls three functions – two calls and either how the decoy moves or to operate the scent fan. For example the top one gives female howl (red writing), baby crow (orange writing) and constant motion (green writing). The lowest one does the same but instead of the decoy option it operates the fan. On the top are three buttons A - red, B - green and C -orange, which work in conjunction with the multi-function buttons.

PEG DOWN AND SET UP

I found the remote offers a range of 100 yards + which is probably enough. Size-wise it’s a bit small and operation with gloves on is not ideal. Turn the base unit and remote on and then select what you want to do. Useful is the fact if you set the decoy for say waggle (random) movement, which is probably best, then you can toggle UP/DOWN through the calls as required too. You can also run two calls at the same time. You need to get to understand the controls but once done the Waggler if nothing else offers two more dimensions to calling in foxes. Of course they need to be in the area first; ain’t that just the way…

FOR:Scent, sound and movement options all in one device
AGAINST:Remote a bit small to use with gloves
VERDICT:Certainly worth a look as it offers enticement options that could work well