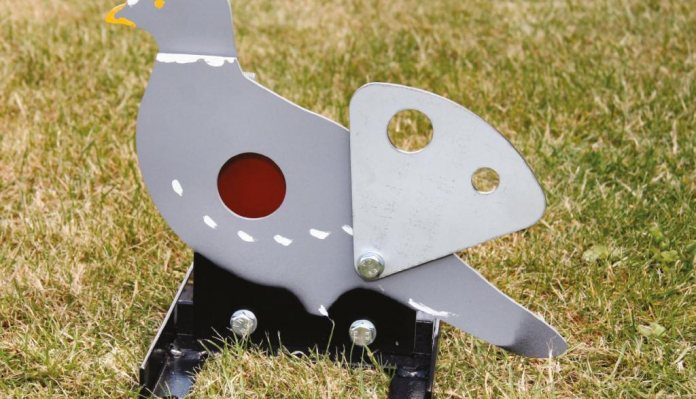 There can be few airgunners who haven’t seen, or at one time or another used, a knockdown reactive target or ‘fall flat’ as they’re sometimes known. In fact, it was the head of Nockover Targets, Derek Peckover who, after years of tweaking and modifying his design, took out a patent to cover the ‘over centre’ mechanism, which is the basic mechanics of any fall flat system.

This was accepted and approved by the B. F. T. A (British Field Target Association) resulting in those manufactured by Nockover quickly became the standard competition target used in events throughout the world. Derek makes and offers a wide selection of these very robust target, but many shooters want more challenging ones and/or resettable cordless types.

On test, I’m looking at two very challenging and realistic animal profile cordless resettable types; the Hunter Practice Rabbit and the Double Pigeon with Reducing Wing. First up, is the HPR; and to save on repetition, like most targets in the company’s comprehensive range, it’s largely made from 3mm, zinc-coated steel that’s been laser cut into shape. The body profiles are double bolted to H-shaped and profiled angle iron bases with securing holes at the corners.

The kill-zones on this particular target (Rabbit) are 2x 20mm diameter holes drilled through the profile plate. Interestingly, the upper kill-zone is correctly positioned for taking down an adult live rabbit with a side-on head shot. The lower is challenging but not exactly anatomically correct for a heart/lung shot, but still requires accurate shooting to hit the disc behind.

The apertures in the profile plate are set 4” apart from centre-to-centre and are challenging, yet very easy to use; that is - hit the head kill-zone disc at the rear of the profile plate and it falls away to rest on the upper ‘paddle’ of the lever attached to the lower disc. When you then hit the lower disc, it swings back and, due to the clever, yet simple lever mechanism it’s connected to, resets the upper disc. This mechanical design is basically the same for all the company’s cordless resettable targets and works faultlessly time after time.

Next, the Double Pigeon with reducing wing; although simple to use, is quite ingenious. This ‘pretend pecker’ is re-set in the usual way, by placing a pellet through the ‘aperture’ of the main body plate into the 40mm disc behind; but a kill is signified, not by hitting a disc above, but by actually hitting the head of the metal pigeon itself. Hit this above the neck and, as it is ‘hinged’, it ‘falls’ over on these to utilise the very similar cordless re-settable mechanism as outlined previously. Once again, hit the 40mm reset disc and the head pops back up.

What makes this even more challenging is the moveable wing. This allows you to reduce the standard 40mm reset aperture to 25 or 15mm, due to it having two pre-drilled reducer holes; so, as it is set in front of the main metal profile of the bird, it’s these you need to shoot through. Secured by a bolt and lock nut, it can easily be swung across so that either aperture can cover and reduce the original to the size preferred.