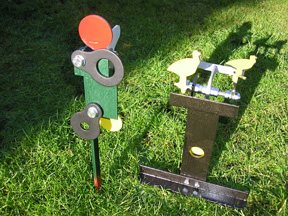 Nockover Targets, based in Basingstoke and run by Derek Peckover, have been at the forefront of Field Target design for many years now.

With Derek a keen FT shooter from the word go, he certainly has a good idea of what constitutes a good target design, and with a burgeoning order book, he’s clearly doing something right!  Whilst other designs have come and gone, Nockover have emerged as THE quality target manufacturer.

The classic Nockover FT Knockdown target is looked upon as something of an industry benchmark, with a reliability that simply isn’t found in other designs. I know only too well from experience, gleaned from the competition circuit that reliability is the key, and home-made or shoddy cheap foreign substitutes are simply unacceptable when serious competitions are staged. It’s a major factor in his companies popularity, I’m sure,  but the sheer range of target designs now on offer, is testament to Derek’s passion and commitment to his business; devising new and original specifications to cater for club and enthusiast alike.

His latest two designs are perfect examples of his art, and both display the trademark quality of construction, coupled with reliable performance;

First up is the ‘Precision Practise’ target, which is a stand-alone design, requiring no reset cord or attachements. Based on the Nockover standard Practise target, this design provides a sturdy body constructed from heavy gauge steel, with a solid ground spike welded to the main body, which is simply pushed into the ground.

Two kill areas are visible: a 45mm disc hinged at the top, and a 40mm disc hanging at the bottom. The shooter has to take a shot at the top disc first, then by hitting the bottom disc, the top kill is effectively reset. It’s a great design and popular with FT clubs on the practise range, as well as for home/garden use.

The new ‘Precision’ version now includes the addition of two ‘teardrop’ reducing plates; one gives a 25mm kill zone (at the top), whilst the other offers a devilish 15mm kill at the bottom. The neat part is that these reducers can be simply swung in or out of position to offer a lesser or greater degree of difficulty- effectively four targets in one.

With HFT competitions now including such challenging kill sizes, this target allows for some secret homework!

The second new product from Nockover utilizes the same knock down/ knock up and reset principle, but this time in a free standing format; which allows for the target to be used at home on a solid patio for example (accepting that a suitable backstop is in place) as well as field use. Again no reset cords are needed, and the solid construction is a given.

Two standard American style silhouette turkeys sit on the top of a large (11.5inch high) steel frame. These are hinged to fall when hit, and are reset when an accurately placed pellet passes through the lower 25mm aperture. Obviously the turkeys can be reset individually, or when both have been downed, and with the whole target standing on a robust ‘T’ frame, it’s yet another winning Nockover design that’s made to last.

I’m obviously a huge fan of Derek’s work, but don’t just take my word for it. He’s just secured the contract for the 2008 World FT Championships in Northern Ireland this year - and recorded his best year yet in 2007, despite a sea of foreign-made, rather inferior copies.