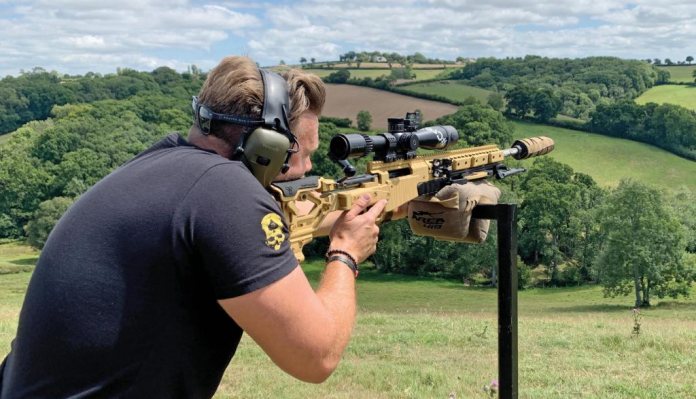 With my employer; Highland Outdoors supporting the Royal Marines Precision Rifle Association (RMPRA) it’s been great following their progress as they begin to get used to the precision rifle game, bringing their professionalism, enthusiasm and ability to just get things done! Although the Marines are all excellent shooters, their drive to be the best means they are more than willing to listen and learn from anyone who can assist them and have been inviting some PRL regulars along to their practice events. Along with last years overall winner Josh Martin, all-round top chap Karl Franks and myself we got stuck in with helping the Marines set up a practice course of fire (COF) along with suitable targets at one of their practice venues.

Team captain Jack had written a training plan designed to test all abilities and in keeping with the grassroots culture of the RMPRA provide plenty of chances for coaching to the less experienced members. With hits being counted to measure improvement there was a positive atmosphere and as the day went on targets were getting hit with increased regularity. One thing that quickly became obvious is that once the RMPRA get the precision rifle game figured out they will be a force to be reckoned with. It was great to spot smiling faces as the day progressed and to see all the barricades and mock stages that were previously causing head-scratching being dealt with swiftly and efficiently.

As it was a balmy summers day, with a high round count I was glad that I’d had the foresight to build a .223 practice rifle to take the strain. Compared to the guys Creedmoors or 308’s, it burns about 40% less powder and my super heavy barrel was heating up less, so I had less of a problem connecting with targets as mirage and mechanical sympathy weren’t a factor. Rifles were getting hot on the hill and all of the associated issues were rearing their heads, with mirage becoming a major factor along with stiff bolt lifts due to rising ammunition temps. It was a timely reminder of the advantages of not pushing loads hard, as performance remains consistent regardless of conditions and a valid learning point for all. The glorious English weather, superb scenery and terrific company made for a superb day with lots being learned by all.

Being a bit of a gear head these days, it’s great to try different things as well as letting others try my kit. Particularly the high-value items like scopes, range finders and chassis systems. It’s always nice to get hands-on before committing and these get-togethers allow a relaxed environment for this to happen.

Thankfully, as I write, restrictions are easing and solutions to be able to continue shooting have been found. With the first round of the Precision Rifle League postponed four months to mid-August, there’s plenty to look forward to on the precision rifle calendar for the rest of the year. To comply with COVID regulations things will be slightly different; there will be three one day ‘Short Range Precision’ shoots that make up the challenge weekend, with a smaller amount of shooters taking part each day to comply with group size restrictions. Some people are shooting multiple days, only their first score of the weekend will count.

Following the announcement of the revised date for Round 1 of the PRL at Orion Firearms Training, I was able to briefly catch up with Tiff Dew, Precision Rifle League Director and talk about how the PRL has successfully navigated the challenges COVID-19 has presented.

So Tiff, obviously not an ideal start to 2020, how has the lockdown period been for you?

Lack of range availability and movement restrictions have hampered a lot of the plans for getting new venues vetted and setup. I’ve been taking the time to take care of admin, whilst keeping shooters and sponsors updated with developments. The extra time to design new barricades and COF’s has been welcome. There are concepts I’d like to implement around how to improve the overall PRL experience which will come to fruition. One idea I’m keen to introduce is a Pro-Am shortrange precision day for day two of a PRL weekend; where the top scorer from day one is paired with the bottom scorer and so on for a pairs team shoot.

What are the plans for the rest of the year and how many times have they changed now?

The season will be extended to run until the end of 2021, with 12 rounds planned currently although plans have to remain flexible due to restrictions on shooter numbers and new venues being formed. Currently, the main plan is to remain as flexible as possible whilst providing a high-quality weekend of shooting for UK rifle shooters and the sponsors who support the PRL.

How has the take-up been for the NRL22 presented by the PRL?

As the travel restrictions have lifted I’ve been able to visit more clubs, although there are still issues with visiting indoor venues due to numbers of people being in an enclosed space, it’s all very positive. The .22 league faces its own challenges within the traditional club environment to remain accessible to all. We’re looking forward to launching in September.

How are things progressing for next years PRL?

The PRL is looking forward to welcoming new ranges in England and Scotland to take part in the 2021 season. With a wider variety of venues, the league will only go from strength to strength, with more to challenge and entertain rifle shooters within the UK.

Do you foresee things being drastically different from what we’ve become used to?

Currently, we plan on keeping the shortrange precision (up to 1000m) and longrange precision (1400m) challenges as separate days for a PRL weekend, once the COVID-19 situation allows. We will be mixing that in with Pro-Am shoots as well as true ELR (1400m plus) at Valhalla for its inaugural PRL event.