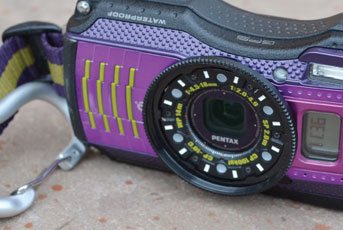 Digital photography has progressed and the mobile phone has often taken the place of the compact camera but batteries don’t last long, flash is slow and quick photos of chanced moments can make the best photographs. To combat this drift towards limited photography that promises Megapixels galore but rarely the lens quality to benefit from it, Pentax offer us their WG3 with some interesting features to suit the outdoor, light travelling types we shooters are.

After I got over the distinctive purple looks (also available in green), the features we require start to emerge. At 125x65x32mm and 239 grams, it will drop into any pocket, ready to capture those treasured moments but where it stands apart is its `outdoor` personality. It is waterproof down to 14m and shock proofed to withstand a 2m drop onto a hard surface. All critical surfaces (lenses/flash) are recessed into the body and rounded corners eschew direct impacts.

With a 16 megapixel sensor and a lens with a 25-100mm focal length (4x zoom), the internal sensory and electronics automatically assign the manual zoom setting with film speeds from 125-6400 ISO to produce the pictures you need. On the rear the 3” LCD screen displays the viewfinder image, all setting and menus. No camera can be thoroughly described in a short space but what stood out was the simplicity of configuring it to do what you wanted on automatic settings but with functions like macro and flash easy to alter with shortcuts on the rear cursor pad.

The ON/OFF switch on top took a fair squeeze to turn the camera on which will prevent accidental battery drain but the similarly firm shutter button (top right) meant a firm hold was required to prevent twitching when taking a photo. A standard 1/4UNC thread is situated on the underside for tripod mounting and the battery, SD card and plug sockets for charging and download are concealed within a double locked flap under the left side of the unit.

Everything is rubber sealed to prevent water ingress and I wish I had the opportunity to have tested its underwater capabilities; 14m is a fair depth even snorkelling! I have had cameras fail when deer stalking before due to lubricants within them freezing and seizing up but the Pentax will withstand cold to -10°, long after your fingers have given up.

A lanyard fixture securely attaches an included strap with sprung carabineer to prevent loss and it won’t get crushed in your bags either, rated to 100 kg. LED’s surround the lens to illuminate close up shots and of the course the GPS function will tag your photo locations if desired. The camera can be charged from any USB socket and also, a Qi inductive charging device which although requiring close contact, is wireless. Last but not least, full 1080HD video can also be captured.

There’s a small internal memory but it takes the commonly found SD card for bulk storage. I charged from USB ports as this fitted in well with my travelling kit and meant I could further economise on luggage. The fact you can charge the unit inductively means you don’t have to open it, preventing any ingress of dirt or water. The two latches on the base of the casing for this job, although very compact operated perfectly. Being set perpendicular to each other means accidental opening is virtually impossible and small yellow tabs clearly indicate their state. I initially gave the camera to my two kids and told them to go forth! Around the home and garden they showed uncharacteristic care with it but brought back some `interesting` photos. More importantly they hadn’t managed to accidentally alter any of my settings which I thought was a good indicator of the cameras ability to retain its setup. I avoided my nephew’s A-level ability in physically destructive testing!

I find the main drawback with many compacts is their lack of viewfinder for use in bright light conditions outdoors when the screen can be hard to see in direct sunlight. Here was no different but it isn’t a perfect world and many of these cameras durable features stem from its compact design. For this reason I can forgive the firm pressure required for the buttons but like any `trigger`, squeezing always beats snatching!

I get very trigger happy when taking photos, if the camera is in my hand I don’t like to risk losing a picture and on average, the 4.5 MB image size stored from photos at full image quality will mean over 1500/3000 photos will fit onto common 8/16 GB SD cards available. At the size of a large postage stamp, it’s worth having a spare though as if you take video footage, you can soon start to fill them up with the HD quality.

One button press starts video capture and I liked the immediate response. A maximum 25 minute film can be recorded in one hit and to give a rough idea, 1 minute will fill 120 MB of the storage space (1GB is approximately 1000 MB). The quality is pretty good and one aspect I was very impressed with was the lack of any lens noise being picked up as the autofocus mechanism constantly adjusted to the field of view in the video. In general I found the camera very intuitive to use, I gave it the `instruction book test` whereby I don’t read them, I just get on with using them and came away happy. I loved the fact that response time was fast, it focussed quickly and if flash were needed, it was always there, ready to pounce with a decent battery life!

AGAINST:
Shutter release is a little firm
Buttons on the small side for big thumbs
Purple – come on…

VERDICT:
A great camera with most shooters needs catered for
Tough and reliable with good capture