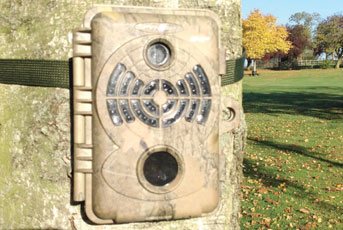 So why do you need one? I have had one for years but decided as it was in use so often another would come in handy. My old Spypoint IR-8 has located visiting Muntjac at the bottom of the garden; identified the culprit when fish heads kept appearing by the side of the pond (a good night shot of Tarka squeezing under the gate – soon sorted by a slab to reduce the gap!). Shown badgers hard at work digging up the lawn (the electric fence sorted that); kept an interesting record of a rutting stand in a local wood; and also provided a good clear shot of an unwanted two legged visitor late one night!

My priorities included a good quality picture, a compact and simple design (I didn’t want to have to read the manual every five minutes), a small LCD screen to view in the field, and a camouflaged outer case. After all, they aren’t cheap and the last thing you want is for it to become an early Christmas present for somebody else!

As the IR-8 was no longer in production I relooked at the market as a whole. Bushnell has a strong reputation in this field. Their top end cams have a long battery life, always useful and also, and maybe even more importantly, an extremely quick trigger speed. However, I couldn’t find one that had the balance of features that I was looking for, so, enter the Spypoint BF-10HD from importer Thomas Jacks Ltd!

Not only had it got everything that the IR-8 had but also had an even better camera (up from 8mp to 10mp), an HD video with sound, and black LED technology which makes the flash invisible to game (and also to man - another anti-theft feature as far as I’m concerned!) This camera ticked all my boxes and was about the same price as what I paid for the IR-8.

The new cam duly arrived the next day and on first inspection looked very similar to the old one – a good start because I knew my way round that one like the back of my hand – but how would it perform?

The first test was a simple one. Strap them on a tree together and throw a stick in front for the Mk I Dog to chase. As you can see, although the IR-8 produced a good image the HD was much brighter and sharper. Then a similar test but this time left overnight in a small wood.  When checked the following day the IR-8 had triggered twice to the HD’s four times. Oh no, not oversensitive! On both LCD screens a Muntjac could easily be seen but the two extra pics on the HD showed nothing!

On closer inspection back home when downloaded onto the Mac, a small squirrel could be seen browsing through the leaves – brilliant! The new HD was outperforming the IR-8 and doing exactly the job I wanted it to do! So, one happy bunny and so far so good! In the future I would like to delve further into the features and abilities of the HD and who knows, if I could get my hands on a comparable Bushnell (the Trophy Cam HD Max for example), I could do a side by side test and see how they stack up against each other.

In the meantime for those more technically minded let’s look at some of the reasons that this unit is one of the leaders in the sub £300 market. The video function is superb and when played back on a large plasma TV it’s outstanding, which is hardly surprising with a 1280 x 720 (720p) resolution. With the new audio feature you feel you are right there in the middle of the action. The sequence length is adjustable from 10 to 90 seconds.

The photo recording has a time lapse facility ideal for monitoring animal movement throughout the night. It also has a multi-shot ability of up to six pictures per detection. The date, time, temperature and moon phase stamp is invaluable in my opinion and easily read once on the computer. For night viewing there are 46 black LED’s – more than in many other brands.

The trigger time is quoted as 0.8 secs (which is only 0.2 secs slower than the market leader) but in the real world I’m not sure this will make an awful lot of difference. If this isn’t quick enough then fix it up to a constant 12v DC electric supply and the trigger time is instant.

The unit comes with a clear and easy to follow instruction manual (which even I found easy!), a video cable, a USB cable (stick it into the back of a Mac and up pops the pictures – name them, download them, erase off camera, then watch at leisure – all over in about one minute), and an installation strap.

The unit takes six batteries which seem to last a long time (I use the rechargeable type). The body can be removed from the shell to take away and be downloaded without having to unstrap it, ideal for ease of use and if you want continuity for the next pictures.

Finally, a few tips for setting these things up. Firstly keep the camera as perpendicular as possible to the ground. Slight tilts up or down can lose you a picture – if the tree is leaning, I use a twig pushed up behind the top or bottom of the unit to remedy this. Secondly, use the test facility to ensure that you have the distance spot on for what you require; if the object is to pick up animals passing close by then you don’t want the cows in the next field setting it off.  Thirdly, if the tree/post is narrow, wind the strap round it several times as it will keep it more stable. Happy camming campers!