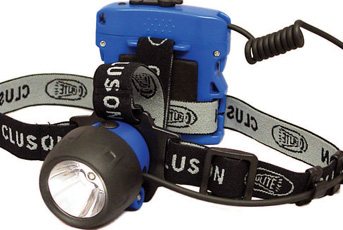 There are three head torches in the Clulite Head-A-Lite range from the high powered 1 watt LED with smart technology to the miniature version, only measuring 20mm diameter, with magnified lens.

The HL 10 rechargeable is a high powered LED head torch, with low power consumption. The head adjusts through 90° so you can focus on your work area. It works by a click stop system not unlike a ratchet and is secure. The other two models use a similar, tilting system too.

A run time of 3-9 hours is available depending on the mode selected – 100% gives 3 hours, 50% 6, 25% 9 and flashing mode 7. It also has a rapid recharge time of 6 hours. It uses a LED CREE XP-C, powered by a rechargeable 4.8v Ni-MH battery capable of producing up to 100 Lumens and can send out a tight beam to 100m. On the rear of the lamp head is a battery status indicator that shows yellow, green and red accordingly.

Operation is by a rubberised switch; click once – 100%, second 50%, third 25% and press and hold for flashing ‘emergency’ mode. One more click switches it off. Also another bonus is pushing the scales to 228g it’s lightweight, yet robust and powerful. Supplied with adjustable single head strap, rechargeable battery in rear mounted pack and mains charger.

The Super Beam Head-A-Lite is Clulite’s latest model using new Cree technology. It boasts a185 lumens of white light with an adjustable focus, seen as a clear plastic lever at the bottom of the reflector lens. It has seven functions with a rear strip of LED’s on the battery compartment for added visibility, which is switched on independently. It’s powered by 3 AA batteries that are housed in a separate box on the head band. Run time gives 16 hours (high beam), 32 low, flashing mode 48 and the coloured LED’s 150 hours. On full power it punches out a tight beam to 125 meters.

The main LED, can be switched off if you want to use any of the three, coloured (red, blue and green LED’s), which can be switched on or off independently. Weighing in at 200g this is yet another versatile, substantial and practical head torch specifically designed for the night hunter. Supplied with adjustable elasticated head strap and overstrap it also comes with batteries. Once again, a single rubberised pressure switch at the top of the lamp head operates all modes and functions.

The HL13 is the latest rechargeable headlight incorporating a concentrated spot beam which gives approximately 150m range detection. It has a large 2 7/8” front lens housing and a run time of up to 18 hours on high beam and 24 on low! The battery is a Li-ion 2x 18650 stored in the rear casing. It uses a single source focused LED and weighs 220g. With a recharge time 6-8 hours, the kit comes supplied with elasticated adjustable head strap, rechargeable battery pack and mains charger. There are optional filters available in red, yellow and amber.

Gordon Clue the founder of Cluson Engineering Ltd has turned 70, so why not read what this famous British company is all about?

The Clulite team would like to congratulate Gordon Clue on his 70th Birthday and give recognition to his 45 years of designing and manufacturing torches for the British industry. His tireless enthusiasm and ability to design our well known high quality torches and gun lights is a real achievement. It all began in 1971 when ‘Clulite’ also known as Cluson was formed; Gordon recognised a hole in the market for a powerful, rechargeable, hand held search and work lamp. This first torch was manufactured from 18 gauge aluminium which had a tough non corrosive plastic outer. It was powered from a 6v non spill lead acid battery.

In 1970 this was then marketed to the farming and security markets where it created a large amount of interest and excitement when first seen. Within a short period of time small batches of 20 were increased to 200 resulting in the need for Gordon and his wife Cynthia to relocate to larger premises.

Cynthia who was responsible for running 50% of the business often reflects on those early days….

She had this to say: “How did we ever manage to work all those late nights in our kitchen testing the torch transformers whilst working during the day and bringing up our two boys Kevin and Martin. It has not always been easy for Gordon especially when he was let down by ex-employee’s trying to copy his design. However his perseverance and devotion to his brand earned him much respect within his workplace and industry. This could never be copied!”

“Over the years he has seen many imported torches arrive but they are rarely repairable and believes most should be regarded as disposable. One of his favourite sayings is “A ‘Clulite’ torch is an investment that is guaranteed to last you years.” The evidence of this is clear to see so we can’t disagree with that.“

As technology advanced modifications were made the basic principles remained. This was to produce a quality torch which was reliable and built to last. It is Gordon’s eye for current market trends that has enabled the company to diversify into other markets. The Lazerlite was designed for hunters and gamekeepers. This was the first one million candle power lamp of its kind. It is still one of Clulites top ten sellers today.

Gordon’s latest design is the called The Light FANTASTIC. A lightweight torch with features galore that uses the latest Cree LED technology. It is difficult to believe that with so much enthusiasm, drive and determination Gordon is 70. A perfect example that: ‘age is strictly a case of mind over matter. If you don’t mind, it doesn’t matter.’

Congratulations to you Gordon on reaching this important milestone! We all wish you good luck in all your future endeavours – You’re inspirational… Charmaine
and all the Clulite team