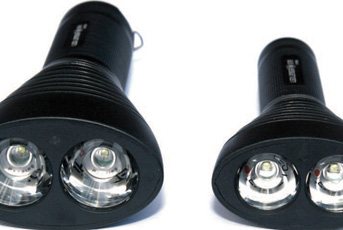 In my opinion LED Lenser have excelled themselves with the addition to their range of two uniquely configured torches, these are the X7R and slightly larger X14. Both share very similar build characteristics, body casings are manufactured from aircraft-grade aluminium and where the design is most evident is at the front as both use two separate LED’s side by side housed behind two separate front lenses.

Both models have heavy duty 360° Hands-Free ABS Belt Clips and there are lanyard points in the tail switch which also houses the combined mode changer and on/off switch. They also both feature two optically synchronised reflector lenses, both incorporating the patented Advanced Focus System optics – a system that is recognised worldwide as one of the best around. Complimenting this lighting power is the Smart Light

Technology micro-chip controlled heart of the torch which allows users to chose between two energy modes, and any one of three pre-programmed lighting functions that deliver up to eight lighting options (Power, Low Power, Boost, Dim, Morse, Blink, SOS & Defence Strobe). This enables the user to choose exactly the right light for the environment or situation that they may find themselves in.

The twin lenses operate in perfect harmony to deliver almost 500 lumens of light. The output from such a small and lightweight unit has to be seen to be believed. The powerful light beam generated can either be concentrated as a focused searchlight beam or alternatively turned to ‘flood’  for close up work or where a wider pattern is required in a circle up to 45 meters in diameter.

The X7R also features the really clever Floating Charge System which is an innovative magnetic contact charging system enabling the torch to be recharged without the need for battery removal from its housing.

Included in the X7R kit are a rechargeable battery, Floating Charge System, hand strap, Intelligent Clip, Smart Instruction Card which are all safely protected for transportation and storage in a durable hard ABS carry case.

The larger X14 model has what the company term X-Lens Technology™ This has been developed to synchronise and control multiple LED Lenses in order to deliver a single superior flood or spot beam of light at up to 480 lumens to a maximum range of 320m. To change the cone of lights diameter, on any setting you thumb over the elongated slightly extended lug positioned at the base of the torch head housing to unlock then manually slide forward the housing which makes it progressively tighter as a spot light. The X14 runs on 4 X AA 1.5V Alkaline Batteries.