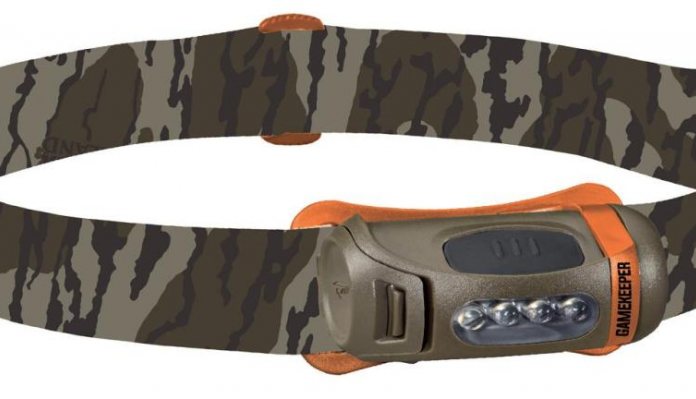 This trio of headlamps have come into being due to Princeton Tec partnering with Mossy Oak, and their Gamekeepers line to produce a ‘family’ of American-made lighting equipment featuring Mossy Oak’s Bottomlands pattern. The design launched Mossy Oak more than 30-years ago and is based off the terrain Toxey Haas used to hunt in his home state of Mississippi.

The lamphead casings are olive drab and hunter’s orange, while the headbands feature the previously mentioned camo pattern. However, it’s not just a case of cosmetics, because the Byte has been up-graded and the Fuel only now available in this format, plus having minor modification; so, it nicely compliments the others.

All have strong, IPX4 water resistant toughened ABS lamphead casings, run off alkaline batteries (supplied) and feature heavy-duty, single strap adjustable elasticated headbands. The front lamp housing/battery casing sits against a back plate, which uses an asymmetrical single arm bracket, enabling the head to be angled down through 90-degrees.

This model weighs a mere 64g, including batteries, making it the most compact and lightest, but it certainly doesn’t compromise on performance. Due to the recent upgrade, it gives 100-Lumens on full power, with a burn time of 58-hours and is equipped with a digital battery lockout. It features 1x Maxbright White LED and 1x Ultrabright Red LED, which are accessed by a three-mode, rubberised pressure switch, positioned top centre of the lamp. Press once for the red LED (useful for loading magazines and preserving night vision), again and the white LED comes on low beam, again accesses full power and one more touch turns it off. Burn times and ranges for the white light are 3-hours 48m, 58-hours 24m and red 63-hours. It’s ‘dual-fuel’ capability allows it to run off the 2x AAA alkaline batteries (supplied) or lithium.

Now, it goes without saying (but I will) that when applied, technology should be simple. Such is the case with the innovative Fuel headlamp, which is now designed to meet the widest range of ‘one-light colour’ option applications most often required, while remaining compact, lightweight and robust.

The unit’s 4-mode, rubberised pressure switch scrolls through the modes of full, medium and low power and SOS flashing in that sequential order. Weighing 78g (including the 3x AAA batteries that run its bank of 4-Ultrabright White LEDs) it produces 70Lumens of pure white light, capable of reaching out to 44m on full, with a burn time of 74-hours. The other light settings have burn times and beam ranges of 100-hours 40m, 120-hour 24m and strobe 150-hours.

The Sync, at 200-Lumens, makes it the most powerful. A large side-dial-twist switch allows you to access all modes, made more versatile due to its skip mode button enabling immediate access to any mode. So, if you require a headlamp with more light settings, dual beam, plus a red LED in Mossy Oak cosmetics it’s well worth considering.