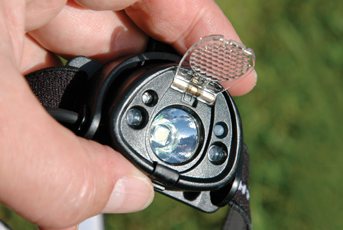 Modern technology of course plays its part as it creeps into all walks of life these days, and shooting sports across the board, benefit from an increasing amount of ever more sophisticated kit. The product on test here is a classic example of how a relatively simple concept - a head mounted light that can be transformed, via some clever features, into a remarkably useful tool; making our lives just that bit easier.

Give Us a Wave!

Olight are becoming a force to be reckoned with in the field of lights and lamping, and this Wave Headlamp is genuinely impressive.

The Headlamp is of lightweight construction, with the main lamp assembly at the front and the battery pack at the rear. Two elasticated straps form the frame, and with full adjustment, the whole assembly is very comfortable when worn around the head. The lamp itself can be angled to suit, and is fitted with tough, ultra clear glass. Measurements are compact with the headlamp being 2.75” x 2.10” x 0.86”, while the battery box is 2.16” x 1.65” x 1.06” and lightweight at just 3.31oz.

Power comes from 4x AAA batteries, and a ribbon of light can be set to show on the battery pack itself, even allowing for an emergency strobe function (the idea being your location can be easily spotted if you have an accident.)

Multiple output modes are possible with this lamp unit, which all add to the versatility. Full power of the primary white light CREE XM-L LED is effective up to around 65metres, and will last for about three hours.

However, when set to low power, it should last for 72hrs approx.  In addition, two auxiliary 5mm red LED lights can be used up to 14.5m, which will last for around 60hrs, or a massive 220hrs when set to an emergency SOS flashing mode. A flip-up flip-down diffuser is built into the lamp too, which allows for a softer, more diffused lighting effect.

One final special feature comes with this headlamp though, and it’s where it derives its ‘Wave’ moniker. The light can be turned off and on by a hand gesture. With the battery pack switched on, one wave of the hand switches on the light, and two gestures turn it off. Press the red button on top of the lamp, and the light can be switched from white main beam, to two soft red lights- subtle lighting, or an SOS setting as previously mentioned. Brightness levels of both are again controlled by quick gestures, or if desired, from manual control.

As avid shooters, of course our main interest may well be hunting scenarios, and here, this Olight Headlamp really excels. The hands-free routine though, really does add a new dimension to a host of other applications, and activities such as fishing, camping, inspecting etc., are all made that bit easier. Whatever the task then, this Wave Headlamp makes a slick, highly functional addition to the kit list, being both well made and well thought out. The Wave is also impact resistant and waterproof to IPX 6 standard .