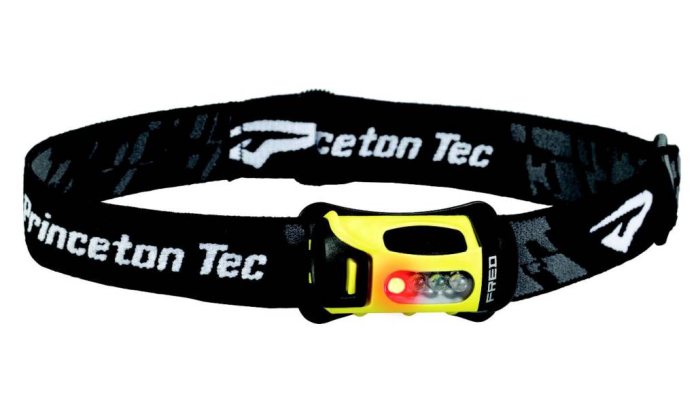 Princeton Tec has now become a very well-respected manufacturer of top-quality headlamps, not only in their base in the USA, but also in now in the UK. In that respect, not surprisingly the models here are featured to suit any night time activity. All have adjustable single strap headbands, asymmetrical ‘tilt’ adjust single arm bracket lamp heads. These casings are manufactured from toughened ABS and are water resistant to IP4X (splashing water) and all models featured are powered by 3x AAA Alkaline batteries that come supplied.

First up, is the unlikely named Fred, which, despite its name, is a very nifty 45-Lumen output headlamp and weighs 78g including batteries. The slim rectangular lamp head features 3x Ultrabright white LEDs and 1x Red LED. The red LED helps preserve night adjusted vision, while still adequately illuminating a gear bag or task at hand. A hold of the large push button switches the unit from the red to the three Ultrabright white LEDs that provide a flood beam; each colour has a high and low mode. Burn Times are Flood High 74-hours, Low 120-hours, Red High 100-hours, low 180-hours.

The Axis headlamp is all and more you’d need from this type of utility light, since all lighting modes are independently dimmable; that means the spot, flood and even red modes. Due to the innovative internal circuitry, you have what the manufacturers term as a superior level of user interface design. On full, the Axis gives out 250-Lumens. The lamp head is fitted with 1x Maxbright LED, with spot beam, 1x Maxbright LED with flood beam and 2x Red Ultrabright LEDs.

It has five lighting modes of Dual beam, high spot, low spot, low flood and red and weighs 83g including batteries. These give burn times and ranges of 50-hours/58- minutes, 75-hours/48-minutes, 129-hours/24-minutes 120-hours/18-minutes and 150-hours/6-minutes. If you include the dimmable facility on each light setting, then you could say it actually has 10 modes!

The Sync has recently been upgraded, to give out a full 200-Lumens and weighs 83-grams including batteries. The LED configuration includes 1x Ultrabright red LED, flanked by 1x white Maxbright LED with spot beam and 1x white Maxbright LED with flood beam. A side positioned twist power dial gives direct access to the red LED, then increments of rotation switch on the spot beam, the flood beam and a dual beam mode; spot and flood at the same time when you require full power. Burn time is given as 144-hours.