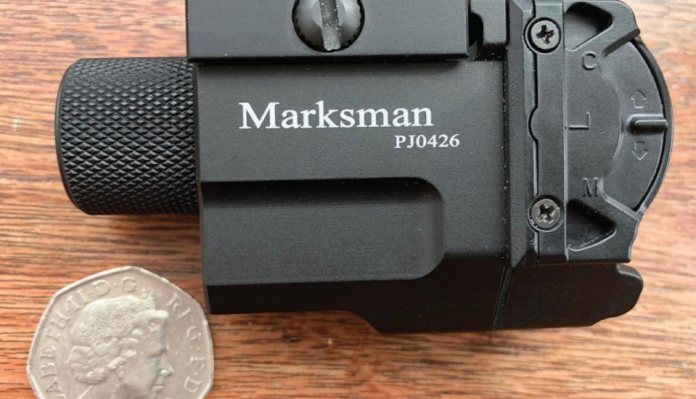 Phoenix Tactical distribute the US-made Powertac Marksman 550 Lumen LED Tactical Flashlight and Laser Light Combo. In a market with most lasers failing to function below +5°C, the Marksman is one of the few tactical laser-light combos available with a wider range of working temperatures. The Marksman laser component has a working temperature range of -18 °C to 71° C and has a 5mW laser that uses state of the art technology to achieve a special wavelength, giving it the appearance of a 20mW laser to the human eye. The unique, patentpending ON/OFF switch offers the simplistic functionality needed during mission-critical situations, which translates to easy operation under less stressful situations! Measuring just under three inches in length and weighing 4.9 ounces, the robust, aircraft-grade aluminium-bodied Marksman is designed to fit most subcompact, compact and standard pistols with a Picatinny rail under the barrel and via a single screw but it can also be fitted on AR15 style carbines and air rifles that are fitted with a suitable rail beneath the forend.

Power comes from a single disposable CR123A or rechargeable RCR123A battery housed behind 550-lumen torch head and offers a run time of 1 hour. A small toggle switch on the very rear of the body tube is pushed left for the torch on its own, centrally for the wide-angled beam and laser together and right for the laser alone. There is a semi- circular switch on both sides, which can be flicked down for momentary illumination, or up for ON; it can be turned OFF again by flicking it down against spring pressure, where it returns to its central position. Zeroing of the laser in achieved using usual small grub screws. These units are available at an introductory price of £180.

The light and laser works extremely well, and I’ve used it successfully whilst fox shooting, however, as my rifle is fitted with a silencer, I mounted the unit on the left Picatinny rail of my straightpull AR15 to stop the moderator from blocking the beam. The laser is perfect for short-range shots when calling foxes in close and would be perfect for some night-time airsoft CQB. All in all, a very neat item with a host of applications and many diverse rifles and even pistols, be they air/ CO2-powered or rimfi re and centrefire fi rearms.