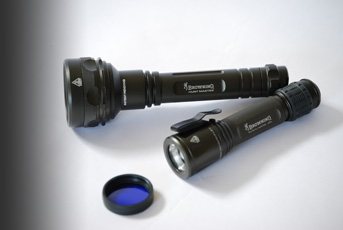 There’s little doubt that compact torches are big business these days, as a hunter I carry one in my pack and another in my truck. Mainly used for picking up/searching for quarry after dark and general illumination; they are an important part of my gear. So I was intrigued when I was told Browning has something to offer in this area. They offer a range of modesl and I have here the Tactical Hunter and Hunt Master, both of which are the business.

Smallest first, the Tactical Hunter puts out 210-lumens via a single, Luxeon Rebel LED, which is rated for 50,000 hour life. Power is supplied by 2 x 3v lithium cells (included), which give a minimum run time of 5-hours. The torch is made from aluminium alloy and shows a bottle green anodised finish, with a knurled body section for grip. The tail cap has a rubber collar and operation is by a rubber-covered switch in its base.

Push once and the beam comes on at full power, a second reduces it to half power and a third to a quarter. Odd is the fact the projected beam is square and not round. A clothing clip is also included as are three, snap on filters – red, blue and green.

The Hunt Master is altogether bigger, though materials and colour are the same with a 40mm lens that holds three Luxeon white LEDs that give an output of 400 lumens. Power is from 3 x 3V cells again supplied. The build is the same though this one shows a far wider head, which can be rotated to focus the beam.

Operation is by a rubber switch just behind the head that gives full power (1st push) and half for the second, Browning quotes a 10-hour run time. The tail cap includes a lanyard.

Both models are fully waterproof and O-ring sealed. In use they offer some decent and workable illumination given their individual outputs. The Tactical Hunter is good for around 50-yards with the Hunt Master topping that out to 100+. The output is a pure, bright, white light and the ability to click on to lesser power level is certainly useful and will contribute to improving overall battery life.

Of the two the smaller Tactical Hunter shows a more intense and focused beam due no doubt to its long, reflector head. The short/wide head of the Hunt Master, though slightly less intense, covers a broader area. Whatever, there are two nice torches, well made, featured and presented at good money that would add to your night shooting gear.

We Reckon:
• For: Efficient and practical designs
• Against: not a lot
• Verdict: Good kit, well worth a look