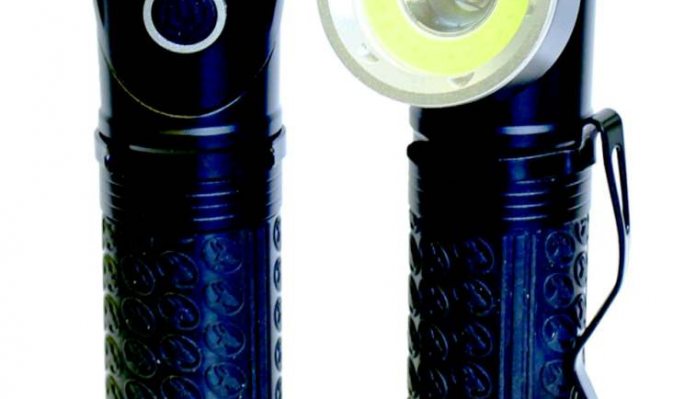 There’s quite a bit of ingenuity going into the latest products that are leaving the Cluson Engineering factory – home base of course to the very well-established Clulite brand of lighting equipment. The latest is the very nifty and useful torch here featured as it can be used as a standard handheld or due to its 90-degree rotating head – transforms into the type seen worn on emergency service crews, but this model also has a magnetic base so can be used in a variety of situations where you need a hands free standalone work light.

Measuring 140mm in length, it has a 36mm diameter base, a 40mm diameter lens housing and weighs 160g plus is shockproof and waterproof. The ML9 is manufactured from high-grade aluminium with a hard-black anodised finish, however the main body tube has a rubberised outer to aid grip.

The head uses an aluminium smooth reflector and houses a CREE XML-T6 LED. With a maximum output of 500L it can run for 3hrs on full beam and takes its power from the 18650 Lithium-ion rechargeable battery which is supplied as of course is a mains charger.

To transform the ML9 from standard handheld to standalone utility light you simply twist the head in a clockwise direction. It’s here you notice the design is such it clicks around on a ratchet so can be angled at seven different positions before it reaches its full 90-degree capability. A very useful and noteworthy feature is the operational switch moves around with the head due to its positioning on the body so is now on top. Ingenious! The ML9 also has a very strong detachable belt/pocket clip.

Since testing the Clulite ML9 I’ve found a myriad of uses for the versatility it offers and it’s one I highly recommend anyone investing in.

In fact, all things considered there’s a hell of a lot to like – the clever design, it’s very well manufactured, the features and functions it offers plus that very strong magnetic base – not forgetting it’s very well-priced.