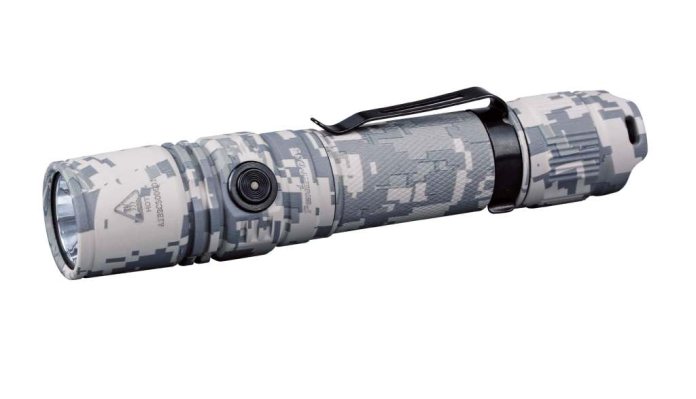 The original PD35 was launched back in 2013 and was described as ‘a typical Fenix PD model which perfectly represented the series’. Which meant you had a tough, user-friendly, onehanded operation torch in a compact package. Also, it combined top-performance with high power output. In 2014 it was made more powerful with the output being booster from 850L to 960-Lumens. Then last year Fenix launched the PD35 V2.0 – heavily upgraded in power, design and components, it also could boast a greater distance, metal side-switch and a nifty battery level indicator.

This special finish model offers a fantastic military look plus all the features of the upgraded PD35 V2.0, including dual colour battery level LEDs built into the metal side mode button. Measuring 138mm long, with a 23mm body tube diameter and 25.4mm head, it weighs 88g excluding battery. As you’d expect, it’s manufactured from durable aircraft-grade aluminium treated to a Premium Type III hard anodised antiabrasive finish, plus it also has an IPX68 waterproofing rating. The Cree XP-L HI V3 LED is capable of sending a tight 1000-Lumen beam out to 250m on full power. Beam purity and overall effectiveness of all light modes is aided by its smooth aluminium reflector and toughened ultra-clear glass lens, which is also treated with an anti-reflective coating.

There’s a low voltage warning function built into the side button mode switch (operates for three seconds after switching on), plus the unit is digitally regulated meaning it automatically maintains each output level if the battery can support it. There’s even, what is termed, an ‘overheat protection function’ that protects the LED and regulator circuit by reducing output, thus vastly extending the service life of the torch.

This latest switching technology of the mode switch and intelligent circuit remembers the previously used brightness level next time you switch on. The rubberised tactical tail cap switch allows for momentary and constanton switching functions.

To add to its versatility the torch comes with a removable pocket/belt clip, hand lanyard and Nylon carry pouch.