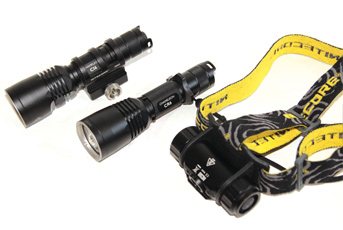 I tested NITECORE’s CR6 and C16 compact torches and their HC50 head torch last month and was impressed! Given the generic, compact gun torch seems to be taking over from the more traditional lamps for short/medium range night shooting the Chameleon C16 and CR6 are good examples of their type. However, the HC50 is something else, as I’ve never seen a headlamp before that can produce 565-lumens.

Torches produce a maximum of 440-lumens with varying levels of illumination along with red, blue and green side lights. The CR6 also incorporates a 3 watt, red LED, as pure (un-filtered) red light should make this colour more effective as to range and visual acuity. Instead of the red, the C16 offers a 1500mW, 850nm Infrared output. A gun-mountable torch with IR will doubtless be of use to NV users.

NITECORE quotes the CR6 with a range of 190m (white light) at the maximum 440-lumen turbo setting. The 3 watt red LED gives 150m and produces 120-lumen. In both cases using the 18650 Li-ion rechargeable battery with corresponding run times of 1 hour 45 mins and 4 hours 30 mins. The white output on the C16 is the same though I did not have access to an NV device to test its IR.

The effective range was less than quoted, which is not unusual and varies if the night is clear/dry or damp, the latter condition refracting and degrading the beam. I was easily getting out past 125 yards on turbo and reckon that 150+ would be possible in the right conditions. For the red light 100 was about maximum, but you must realise that the darker image will not suit everyone as it does reduce acuity. Beam spread was a tad wide too but by the same token you got good specific/central target illumination in a wider pool of light, so it was easier to see the quarry and not lose track of it.

The coloured side lights have their uses, certainly for close-in work like loading/unloading guns etc, with blue, red and green on offer it’s down to personal preference.

The HC 50 on turbo is very bright, with a quoted range of 85 yards, in reality it’s about 50, which is still impressive. The lens is smaller and the beam shows a lot more spread and less centre, which is better here. In terms of seeing and picking up quarry at night it gives you a serious edge. At a push it could probably be used for close-in shooting with shotguns or iron sights. It will also be good for work as it brings a lot of illumination for changing a tyre etc. Plus the twin, red LEDs pump out enough power for small close work.