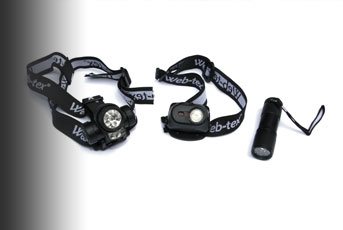 Web-tex, which could be considered the police/military side of Thatchreed (Jack Pyke) offer a wide variety of outdoor clothing and these days they increasingly supply equipment too. To this you can now add compact torches. Typically well designed and priced let’s see what they’ve got. All come with batteries included, but there’s no information on lumen or LED wattage given, so where applicable I’ll guestimate the range of beams.

The 3-function LED Headtorch is very much top of the range. The lamp head has a familiar build and LED design layout, measuring 2 ¾ x 2 X 2” it’s powered by 3 X AAA batteries housed within the casing. It features an adjustable, elasticated headband and over strap to keep it firmly in position, with the lamp head offering a strong and secure ratchet action tilt facility. The three light modes are accessed by a rubberised pressure switch on the right of the main body. Switching on brings on the three red LED’s below the main lamp. The main light features eight super-bright white LED’s. A second push turns on the central, white LED for close range work giving a non harsh beam out to 15-yds. While the third push activates all white LED’s to easily illuminate an area out to 75-yds.

The Warrior headtorch has a single adjustable elasticated headband and is also powered by 3 X AAA batteries housed in the body measuring 2 ½” wide X 1 ½” X 1 ½”. The layout is simple yet clever in design. It only has what is described as a ‘wide angle, high output LED bulb’, this is set to the right with an ingenious slide-over red filter. When this isn’t needed it can be moved to the left to slide ‘inside’ to be protected by the outer front casing of the lamphead. It has the same ratchet tilting facility as the previous model, but one, single, top-mounted pressure switch accesses three-modes of ‘standard’, ‘boost’ and emergency flashing. Standard casts a wide beam to over 25-yds while boost easily doubles that distance. When slid over, the red filter is very effective and has no overspill.

While the headtorches have synthetic casings the Warrior LED Torch has a lightweight aluminium body. Power again is by 3 X AAA batteries that runs nine high output LED’s that can cast a tight beam over 60-yds. It only has an on/off function using a rear-mounted, rubberised push button switch. As its recessed there’s little chance of it being switched on inadvertently while in your pocket. It also has an easily detachable hand lanyard attached by a split ring at the rear but due to its small size can’t be worn if you want to operate the torch switch with the thumb of your same hand.

All featured are amazing value for money considering the performance and will give many seasons of use.

For A decent range of head and hand torches

Against Not a lot

Verdict At the money well worth a look