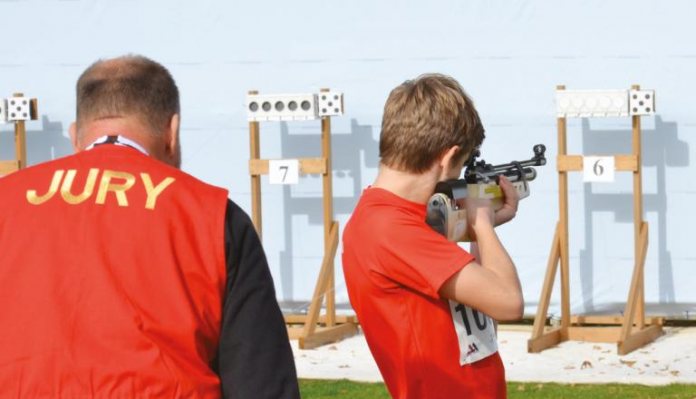 Attracting new blood into any sport is vital for its survival and development. Yet our treasured world of shooting can often be its own worst enemy, as many take up the natural defensive position of keeping a low profile. But, I’m happy to be able to report that this rather negative climate does seem to be changing.

One brilliant new initiative that has really begun to take off, is the sport of Target Sprint. I first heard some background rumblings about this exciting discipline about a year ago, and whilst all importantly, it attracts youngsters into our sport, it is structured in such a way as to appeal to everyone, with a modicum of fitness. A three-day Festival of Target Sprint, held in early October, culminating in a National Final, was just too good an opportunity to miss, so I dropped in to the Yate Sports Complex, just outside of Bristol, to see what all the fuss was about.

Target Sprint actually started in Germany in 2013 through the International Shooting Sports Federation (ISSF) and is best described as an ‘evolving sport’. A standard format for our UK/ National events is for the competitor to run 400 metres, shoot five knock down targets, run another 400 metres, shoot five more of the same, then run the last 400 metres to a finish line. All the shooting takes place at a distance of 10 metres and is shot from the standing position. Unlike Biathlon, where shooters carry the rifles, Target Sprint has it waiting in a rack at the firing point, so there are no safety issues. Each knock-down target disc is 49.5mm in diameter for National events, and this reduces to 35mm for International events. Try and shoot anything standing after a brisk run, and you’ll begin to grasp the challenge on offer here.

Top British manufacturer, Air Arms, are the main sponsor for Target Sprint events, and this means that the rifle to be used is an Air Arms MPR or S400 target derivative, such as their latest TS400, all producing energy around 6ft/lbs; oh yes, no telescopic sights, instead target-style, dioptre-types, and competitors can either use their own rifle, or borrow one from the range, which is again a great feature to encourage newcomers to try their hand before any major outlay.

Up to 15-shots can be taken to ensure all five targets are knocked down, and if this limit is reached then you just start running anyway. Sometimes a time penalty can be enforced, but your natural delay if you keep missing, is normally enough!

The first National Series began in the UK in 2016, and the idea is that everyone competes in their own class, specified as follows:

Heats are run nationally to select who qualifies for the final, but international events and a World Championship are all now in the calendar. Of course, enterprises such as this don’t run themselves, and behind the scenes are various key figures, beavering away to ensure everything goes off without a hitch.

Former pistol shooter, Georgina (Gorgs) Geikie, the Events and Commercial Coordinator for British Shooting, has overseen the development of Target Sprint, along with a team of volunteers. Gorgs is herself a multiple medal winner, and she runs the Schools Pistol Championships, which includes seven regional shoots. Ten countries now take part in Target Sprint, with others trialling it, so it really is taking off. This 2018 Festival of Target Sprint was the first time an international event has been run in the UK, and it’s the third year of staging the National Target Sprint Finals, and Gorgs was clearly buzzing from the success of it all, when I caught up with her on the Sunday- National Finals day.

This Final was a good mixture of previous medal winners and less experienced participants, among the 70 competitors, all there to battle it out in their respective classes. All the attendees had qualified to get to the final, which made for an exciting finale to the Target Sprint season. Competitors line up on the start line, and are then given an introduction, from Master of Ceremonies, Shak Siyya, who himself had recently returned from the World Championships in Korea. Quick witted and animated running commentary, all added to the exciting atmosphere, and it was difficult not to be engaged by the fast action unfolding.

Indeed, the photo finish between Jonathan Williams and Harrison Pepper, in the Youth Men 11-15years, drew gasps from the crowd, and was so tight, they were awarded a joint Gold medal after the judges simply couldn’t tell them apart! Elsewhere, Oliver Vass caused a stir when he felt confident enough to cartwheel over the finish line; winning in style for sure.

On hand to monitor the events, were top brass from British Shooting, and meeting CEO, Hamish McInnes, and Chairman, John Harris, gave me an encouraging insight into this discipline, and the current state of play within our sport in general.

Start to show an aptitude for Target Sprint and there’s some structured coaching from the likes of British Shooting’s Head Coach, Martin Beard, and GB Rifle Coach, John Saint also in attendance at the Festival to see their charges perform. To get started, all you need is a pair of trainers, and everything else is provided.

Time to highlight the sponsors then. Apparently, Air Arms have sold S200 and MPR models to the Scouts and Army Cadets directly for the last 15 years and this has helped generate enthusiasm for airgun shooting and nurture the sport at grass roots level, where it really matters. Good move chaps.

Target Sprint competitors at National level, use an Air Arms MPR target model, but what has been really impressive is how this dynamic manufacturer has worked closely with Team GB, resulting in the new ambidextrous cocking lever, that is making such a splash on the competition circuit. This clever design allows the shooter to cock the action with the thumb, all in one quick action, and in use, has trimmed around a second a shot from the time taken, which in such a hotly contested sport, makes a big difference. Indeed, the development has been so well received that Air Arms now produce a revised model of the MPR, in the shape of the TS400 Target Sprint.

Air Arms Managing Director, Claire West has been instrumental in driving the project forward, and she was clearly enjoying the Festival atmosphere and said: “It’s great to see such enthusiasm and passion for Target Sprint, and nice for us to be involved and put something back into the sport. We’re proud of our ongoing development with Team GB too. There are 14 GB Squad members, and the majority choose to use Air Arms rifles in the International events, where they can opt to use different hardware. Events like this just make it all worthwhile.”

So, there we are; quite an event. Target Sprint really is a fantastic format, and as was stressed to me on the day, it can be so easily adapted to suit less able shooters, therefore offering wide appeal. It’s a great spectator sport too, and having now seen it up close, and discussed its development with the main figures pulling the strings, I have to say the whole operation is mightily encouraging, and proof of what can be done, with a little imagination, organization, and bucketful’s of enthusiasm.

For more information on this exciting new sport, check out the website at www.targetsprint.com

*Shooting Sports: When did you start Target Sprint?

“This is my first year. I entered a competition back in May for the first time.”

*Shooting Sports: How did you get into it?

“I’m in the 10th Romsey Scout Group, although it’s the 21st Romsey Scout Group that does shooting. I went camping with the Scouts and we did rifle shooting and archery there, and one of them told me about Target Sprint and said to have a go. I just loved it.”

*Shooting Sports: And what about practise?

“I try and practise once a month but more often when there is a big event coming up. We have club guns to use, so I borrow one at the moment but will hopefully get my own soon.”