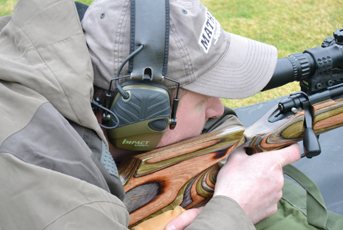 As a shooting journalist I have to test a lot of guns so hearing protection is a high priority.  Howard Leight are a long standing name in both the recreational and industrial worlds of hearing protection and I was sent a pair of their Impact Sport units on test just in time for the start of the game season. Although in competition or on the range the remarks made by ones fellow shooters can be, let’s say `uncomplimentary`, in the field it can be very important to not only protect yourself from gunshot noise, but with the addition of electronics, hear sounds made by quarry!

The Impact Sports are a folding design that can be slipped into a pocket and then opened out and fitted comfortably over the ears with the telescopic arms. The slim design was a little shallower internally than some I have used but the soft perimeter padding was forgiving enough to not only seal in the ear, but accommodate the edge of a hat which can sometimes critically break the seal, the instructions do warn you to make sure of this.

With a noise reduction rating of 24dB these qualify as class 4 protection which although not up to aircraft ground crew levels, certainly offers a satisfactory compromise to the shooter who needs a slim enough design to allow uncluttered head positioning on a stock, either rifle or shotgun. A foam covered microphone on each side allows full stereo hearing shielded from unwanted wind noise.

The two (supplied) AAA batteries both clip into the right side unit and a rubberised rotary ON/OFF volume controller sits flush with the casing to the rear of the left ear. After 4 hours the unit automatically switches off to save battery life. A standard 3.5mm stereo cable can be plugged into the socket on the left side to either connect your iPod or other audio accessory which should be used with caution. The volume of any audio input is increased and decreased simultaneously with the external hearing amplification and will thus not allow low level background music with high level hearing volume!

WOODCOCK is always shouted out when a beater or other gun sees one in flight and with the Howard Leights; I could hear this from about 500 yards with the volume controls set at acceptable background levels. The wing beat of pheasants could also be heard quite easily at 150 yards along with the rattle of them either clipping branches or crashing through them on final terminal descent. I set the audio controls so that conversation was entirely normal and all that was cut out was the gunshot itself, I had no problem mounting the shotgun as normal which is critically important and generally found the Leights to be comfortable all day in the 20-30 minute stints I required.

At a covered rifle range firing point with a booming metal roof I found enough protection for comfort but did add disposable plugs underneath as I ALWAYS do if muzzle brakes are in use, I don’t like to take any risks.