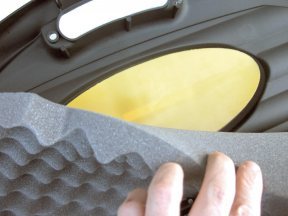 Flambeau Europlast are very well-known due to their high-quality manufacture of injection moulded products that include everything from gun cases to shell box carriers to plastic decoys. In relation to gun luggage they’ve long had a series of similar models to these featured that were originally marketed under the Safe Shot™ moniker. All are manufactured from toughened ABS and therefore offer a higher level of protection for a gun while in transit, and thanks to holes positioned strategically on the outer rim (and inside the comfortable integral carry handle), the case will accept a small padlock or combination lock preventing unwanted access. Internally, all cases are fully lined on both sides with thick eggshell foam padding, have four generously sized ABS clip-locking points and a strong full-length piano-style hinge is used to cope with the case being continually opened and closed. The ‘abbreviated’ ABS hinges are also all reinforced with a brass rod to provide extra strength, durability, safety and protection.

Just in case The range Highland Outdoors offer includes a Single Oversized Economy Shotgun Case, Single Oversized Shotgun Case and Double Oversize Shotgun Gun Case. The shotgun cases measure 53 5/8 x 12 1/8 x 3 ¾ inches, 53 ½ x 13 ½ x 4 ½ inches and 53 ¾ x 16 ½ x 4 ½ inches respectively. The Economy class case will stand up to a reasonable amount of rugged use, but the other two models are more durable and hard-wearing due to the outer shell having a stronger build. Despite the monikers, the Singles will also takes most scoped-up rifles, while the Double, though built to hold a pair of shotguns, will also take two average size scoped-up Sporters or any single rifle with a large optic or NV scope plus bipod fitted.

A compound called ‘Zerust’, a patented polymer, is actually moulded into the ABS to emit a harmless vapour that forms a protective layer around metal surfaces. A large oval-shaped flattish Zerust ‘patch’ also comes with the cases and sits neatly in a recess underneath the foam inner beneath the Flambeau Outdoors moniker. As many will know Webley now market Zerust in several formats from aerosol spray to impregnated cleaning patches.

Zerust® protects materials such as aluminium, brass, copper, iron, steel and even silver from rust or any unsightly and damaging corrosion due to it containing a VCI (Vapour Corrosion Inhibitor.) The oval patch also emits an invisible, odourless and non-toxic vapour which diffuses in the enclosed atmosphere until the air is saturated. The Zerust molecules cling to metal surfaces protecting them until the metal object is removed from the vicinity back into a normal atmosphere. After removal these molecules vaporise, leaving the metal, clean, dry and corrosion-free. It’s environmentally safe, leaves no odour or residue and is now even NATO approved.