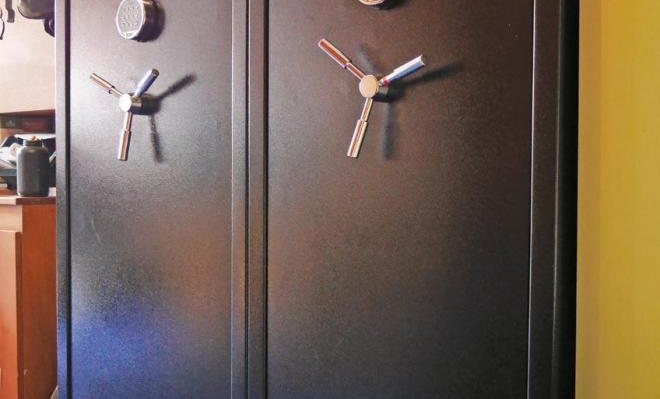 I got my first shotgun in my early teens, and my first cabinet. As my arsenal grew, so did the line of cabinets bolted to the wall. A very miss-matched selection too, which made finding the gun I wanted at the time a case of hide & seek! Things had to change, and that meant finding a really big cabinet… or maybe even two! Investigation showed choice was good but I didn’t see what I was looking for: everything seemed either too Spartan or beyond my budget. The lesson I took away was just how much one could spend on such a project.

The other consideration was size. Cabinets are typically described as to how many guns the manufacturers think they can hold – 5 or 10 etc. In some cases this seems to be for skinny and un-scoped equipment rather than a modern clay gun or scoped rifle, let alone any tactical/precision hardware. I reckoned I’d have to take 1/3 to 1/2 off the advertised capacity when calculating what I needed. Then I came across the Buffalo River Black Diamond gun safes. With an SRP of around £930 for a 24-gun model –not cheap, but still several hundred pounds less than others I had seen. The price was attractive, as were the smart black finish, silver logo and chromed 3–spoke door handle.

The interior is fully-lined with grey carpet and complete with a lockable top compartment with a removable shelf alongside it. Two x 12-bay U-shaped gun racks, and a pair of removable/adjustable shelves for converting one side of the cabinet for storing ammunition, optics or other items completed the storage. Most importantly, the safe locked up with 10 massive chromed bolts and an electric key pad: so no more big bunches of keys to fumble through!

So far so good, but even the 24-gun model would clearly not be enough, as its real-world capacity looked to be about 16-20. Never mind: its external dimensions occupied exactly half the wall area of what I had so there was room for two!

A bit of internet browsing and a few phone enquiries later and I had agreed a great combined price with Robin at EMA Custom Rifles, who promised to have UK distributors Highland Outdoors send them direct to me from their warehouse just as soon as they had them in stock.

Safes are pre-drilled for the anchor bolts supplied, but you do have to make holes in the lining for them to pass through. After that it was just a matter of drilling the wall and floor, spinning the bolts tight, capping them with the protective nylon covers provided, and informing my local Firearms Licensing Team of the change.

As I moved my guns in I realised two things; first, although there was room for 10 shotguns each side of the central divider, I could only fit 6-8 scoped rifles per-side; secondly that there was more room left over for gear than I had expected. The back of the gun-rack was wide enough for powder canisters and boxes of rimfire ammo; the top shelf took all my centrefire ammo; and the lockable compartments in each cabinet swallowed up my bullets and my sound moderators.

It’s always true that you can get more into a cabinet by packing guns in like sardines; but I wanted room for future additions. So I was glad that I had over-budgeted for space, buying a notional 48-guns’ worth of capacity to house just half that number. If you do want to maximise capacity, however, I’d recommend removing all the shelves from the main storage area and using the Rifle Rod system (available from Brownells UK).

Another good feature is that if you don’t require the full capacity for long arms, you can install the two extra shelves provided using the configurable ladder-type support system present on both sides of the main storage area. There’s also some hidden space under the floor: perfect for documents and small valuables.

The digital keypad was easy to set up. Depressing a small latch underneath lets you rotate and remove the housing to install the 9V PP3 battery supplied. With the housing back in place, it’s time to activate a red button located inside the door near the hinge and then enter your chosen 3-8 digit code. Then, after testing your code a couple of times with the door open, you can secure the safe with confidence.

To access; punch your number into the keypad and hit the # key. Each time you enter a number, an amber LED will light up and you’ll hear a bleep, and after entering # a green LED and a triple bleep confirms the code was correct and the three-spoked handle is free to move. Turn it clockwise to unlock the door. If you get a red LED when you press a key it means the battery needs replacing. Fortunately the safe remembers your access code, so you won’t have to re-programme it afterwards. If you enter the wrong code three times in a row, you have to wait 20 seconds before you can try again. Fail again, and it’s a 5 minute delay. Buffalo River supply a ‘trouble key’ (plus spare) that lets you unlock manually via a keyhole concealed behind the keypad housing.

I was really pleased; everything was now easy to find, reach and store, but even with the gun racks and shelves full it still seemed to me that there was a good deal of dead space, especially in the vertical plane, that I might do something with. For example, the backs of the doors are fitted with small hooks and a rack for cleaning rods. Now I was all set!