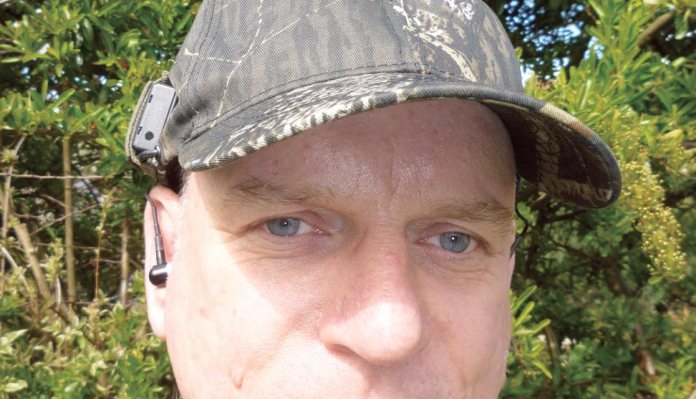 When I first started shooting fullbore rifles in the Army Cadets, all we had to protect our young ears were rolled up bits of toilet paper stuffed in our lug ’oles! It hardly did anything but as it was all we had, we just got on with it. Things are rather more sophisticated these days however and hearing protection comes in many forms; conventional ‘cans’, electronic versions that cut out the bang when a gun goes off and either ‘passive’ or ‘active’ moulded in-ear plugs.

At The British Shooting Show in February, I met Jeff Myers who was keen to show me his new, patent-pending, Hearing Protection Shooting Hat. It’s a very simple idea and I’m amazed that no one has thought of it before!

The main part of this new product is very easy to describe – it’s a baseball cap! It’s just like millions of others out there and is made from a camo material; so far, so conventional. The only give away that there’s something more to this cap than most others are the two wires hanging down on each side, with tapered ear plugs on the end and a small, elasticated pouch on the right hand side of the cap, just above the wearer’s ear.

The pouch houses the clever stuff. Inside is a small unit that houses a single AAA battery and the internal circuitry, which allows the wearer to hear as normal, or have sound amplified. The beauty of this is the fact that you can actually hear better than normal, (up to six times in fact) so that range commands, during a competition for instance, are easy to hear. When the fun starts though, the circuitry reduces the sound of gunfire to a fraction of what it actually is.

I always like to test equipment in real-life situations, so the last Civilian Service Rifle match of the 2015-16 winter league was the perfect opportunity to see how this clever product performed.

To wear, it’s just like any other baseball cap – you just put it on your head! The in-ear plugs just push in and the ON/ OFF switch is rotated to turn on the unit; once the level of amplification is reached, that’s it. The cap, unlike conventional cans that can interfere with the butt, does not affect gun fit in any way.

I was able to hear ‘Load’, ‘Make Ready’ etc. as clear as day, clearer in fact, and the sound of gunfire was much reduced throughout the day. It was quite windy and on occasion I had to reduce the amplification a little to cut out wind noise but that was just a case of turning the dial above my ear a fraction. I even wore the cap when I wasn’t shooting and simply pulled the plugs out of my ears and tucked them up into the cap, where they were unnoticeable.

This is an impressive product, ideal for range use, clay busting or when out after game; it’s also great for hearing what’s around you in the countryside, making birdsong easier to hear if you’re a birdwatcher. It also makes squirrels easier to hear, as they scamper about in the branches above you. For its main purpose, I really can’t fault it.