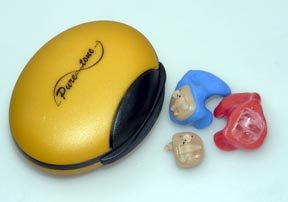 For well over twelve months I’ve been using CENS Digital Hearing Protectors, safe in the knowledge that my hearing was enjoying the ultimate in safety. The design goes for moulded ear plugs with integral electronics that amplify low level noise and cut out the high/dangerous ones. I always thought when it came to comfort and performance, it could not get any better. Wrong!

Down at Puretone, manufacturers of CENS Digital, they don’t let the grass grow under their feet. Besides their already acclaimed acrylic active hearing protectors they’ve now added a fully customised silicone rubber version to their line up. Produced once again from a mould taken from the wearer’s ears, these ultra soft plugs are available in red and blue along with the new clear or flesh colours. However, unlike the earlier version, the silicone Flex utilises a removable active system or a passive plug, an inclusive option ideal for Trap shooters.

In respect of the electronics, the technology of the acrylic CENS Digital has been transferred along with the programmable options, the only addition being that of a new rain and wind guard over the microphone. In Digital 1, the active system’s Attack or response time is 9 milliseconds (m/s) or with a release or a return to normal hearing period of 200 m/s. Where the Digital 2 system truly comes into its own is in the dual program facility. By depressing the small button just above the battery housing, the wearer can easily toggle between what’s best described as game and clay modes.

Equally sensitive, once again the reaction or switch off time is a mere 9 m/s. Where the two modes differ is that in program one, best suited for game shooting, the circuitry becomes active 110 m/s later once again allowing the shooter to audibly detect their next pheasant or partridge or rapidly approaching boar. But for the clay shooter, program two holds the system’s release for 1000 m/s, thereby increasing protection time due to the increased number of shots and nearby harmful noises.

Having now worn the Digital Flex 2’s over extended periods of six and eight hours, I can honestly say that the comfort levels of the new silicone versions verge on sublime. Unless you have the volume turned to high, you cannot tell you’re actually wearing them to a degree they don’t protect your ears, they cosset them.

Where the Flex also simplifies matters is in maintenance. Since either the electronic of passive inserts can be removed, all the wearer needs to do is pass the supplied brush through the hearing canal. Likewise, to combat the effects of rain and cold, the new Zephyr drying routine ensures your CENS are ready and willing the next time you need them.

The Zephyr consists of a small, mains-powered container fitted with a module of water absorbent crystals. The process circulates a current of warm air around the CENS that both dries, warms and maintains them, the perfect overnight process that requires absolutely no effort from the user.

Both the CENS Digital Flex 2 and Zephyr drying system unreservedly receive my ‘Shooting Sports Thoroughly Recommended’ seal of approval. Admittedly neither pair of Flex active ear plugs is especially cheap but what price your hearing? Likewise, unlike headphones, there’s nothing whatsoever to foul or scratch the stock, the flush, customised fit completely eliminating intrusive protrusions. With CENS Digital Flex 2 you can hear it and react before it’s even happened.

Price wise, the single program Flex 1’s are £449 per pair whilst the infinitely adjustable Flex 2’s cost £549, both are inclusive of the passive plugs whilst the useful and in my opinion mandatory Zephyr drying system is priced at a reasonable £65.