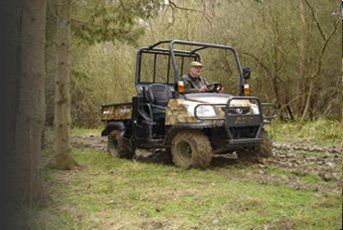 For many it’s Polaris or nothing; their quads and ATV’s have attained global recognition and have a proven reputation to go with it. Gaining invaluable experience from their production of snowmobiles and skidoos, Polaris now offer nine utility quads and seven ATV’s within their constantly expanding range of petrol and electric driven working off-roaders.

Taking the quads first, the Sportsman models are one of the largest available, engine sizes ranging from 299cc to 850cc that are either air/oil or liquid cooled with carbureted or electronic fuel injection that also feature active engine braking and active hill descent as standard or optional, 2x4, 4x4 on demand or automatic drive or for those who require extremes of off-road capability, the 6x6 Sportsman 800 Big Boss.

Suspension is through dual A Arm or MacPherson strut (once again dependant on model) whilst cargo rack capacity is from 31.8kg to 55kg for the front, 45.4 to 180kg at the rear for the four wheelers, 362.8 for the 6x6. Similarly, unbraked towing capacity extends through the range from 550.2kg to 964.8kg.

Moving to the Ranger ATV’s, besides their new electric 48volt EV model, all other Rangers are either single or twin cylinder with engine sizes varying from 498cc with an optional high output version on the 500 HO and 760cc with electronic fuel injection or a carbureted 455cc as fitted to the 400 model. Most Rangers (except the EV) are fitted with automatic shaft driven transmission with on demand 4x4 or all – wheel drive, rear 4x4 or full 6x6 on the 800 that also incorporates a mid mounted diff lock plus power steering.

Payload capacity runs from 453.6kg to 680.4kg with the 6x6 extending this to 907.2kg whilst towing capability are from 567kg to 907.2kg which effectively doubles the 6x6 version’s hauling capacity. For those who need to move people as well as kit, there’s the four-seater 800 Crew that’s still capable of replicating two-seater facts and figures.