A day at the auction 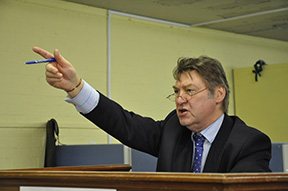 I always enjoy my trips to Southams auctioneers which hold regular sales in Newnham Street Bedford (though their headquarters are at 8 Market Place, Oundle, Northamptonshire). Every auction house tends to have its own atmosphere, and I would say that the word that sums up Southams is accessible. I am sure they won’t mind if I note that this is not an especially upmarket auction – though the occasional very high quality lot is on offer – it has the feeling of a country sale with members of the trade and the public all mingling and hunting for a bargain and intent on having a good day out.

Stay Calm and Gave a Good Look Around

If you want to try an auction for the first time, Southams is a great place to start, but don’t go mad with bidding - as one can when attending a sale for the first time!
Always set yourself a limit on anything you bid for in auction - don’t let adrenaline get the better of you (a council of perfection sometimes). I recently attended a major auction (not Southams) where I saw an old glass-ball trap (the forerunner of the clay pigeon trap) sell for about five times what it was worth when a bidding war broke out (one bidder appeared to be bidding it up just for devilment). Stay calm and collected and stick to your limits (or close to them).
Here is another pragmatic tip, when you view pre-sale, examine all the lots you can and make sure that you know exactly what they include (this is especially important in the case of mixed or combined lots). Don’t be afraid to ask questions. Read the catalogue. Auction catalogues - new and old - are stuffed with valuable information (and should always be kept with a record of prices achieved for future reference).

Unlike many other auctioneers, at Southams the lots are not estimated, nor is there much description in the catalogue. This does not have to be daunting (and if in doubt, ask the staff pre-sale – see below), but don’t take a risk on the higher priced lots unless you really know your stuff. My advice to first-timers would be to have a punt – after careful examination and consideration – on one of the many small, interesting and cheap lots that are typically on offer.

Nigel Croskil, the auctioneer at Southams - a man who always conducts sales with great efficiency and considerable wit – notes: “We try to be all things to all people. We don’t try to beat the city boys. I like to think everybody enjoys our sales, we don’t want it to be too stuffy; we don’t want it to be a situation where people are too frightened to bid. Even when people have only been a couple of times you start to get to know them on a personal basis. I like to think that we are more personal and less daunting than the London rooms. When you talk to people they are often uncomfortable about going to the big name sales rooms but they come here and have a good time.”
I would agree with all of that, but, in a spirit of objectivity I asked my mate Diggory Hadoke, a dealer with much experience of all the rooms, for his opinion of Southams: “They have worked really hard to become more polished in regard to their gun sales in recent years. They now have a presence at the CLA Game Fair and their catalogues are much improved. It is a good place to pick up a cheap rifle, or, obsolete ammunition and other small interesting lots including knives. But, Caveat Emptor, as lots are un-estimated so make sure that you check them out really carefully before bidding – especially shotguns.”
I would certainly consider buying a shotgun or muzzle-loader there as well, and they have a really good range of wall-hangings and other collectibles too, not to mention gun cases, reloading gear and just about any shooting paraphernalia that you might ever of imagined (at the last sale, I bought a tiny Eley Grand Prix cartridge intended for George VI’s miniature Purdey hammer gun).

If you are considering a shotgun at Southams or anywhere these are my 20 questions. They are taken from the appendix of my latest book The BASC Guide to Shooting Game (and, no, I am not ashamed to plug it because I spent three years writing the blessed thing and wish a few more people would buy it!).

1) Is the gun in original, worn or refinished condition?
2) How much action colour is there? Has it been replaced?
3) Is the engraving crisp?
4) Is the gun in proof? Has it been re-proofed (if so, to what chamber length)?
5) What are the wall thicknesses? Is there sufficient thickness for safety and future repair.
6) Have the barrels been shortened or has choke been removed from the gun?
7) Are the ribs attached to the barrels? (Suspend them, carefully, from a finger by one lump and tap them with a pencil - do they ring or is there a tinny, rattly, sound? - the latter indicates the ribs have come away and require relaying, and, possibly, that there is rust damage to the barrels underneath.)
8) Are there any cracks in the action? (look carefully at the area where action face and flats meet)?
9) Is the action face in reasonable condition, has it been welded and refaced? Sure?
10) Is the gun ‘on the face’ or does it require tightening? Are there signs of poor quality tightening such as peening of the lumps or action squeezing (guns can be tightened, crudely, in a vice).
11) Are the strikers and main springs in good condition? (This can be tested by firing each barrel of the dissassembled gun against a nylon block.)
12) Does the top lever spring function? Or, does it feel spongy (in which case it probably needs replacing)
13) Does the gun have a single trigger (English single trigger guns are notoriously unreliable - I never touch them).
14) What ejector system is built on (Southgate is to be preferred because it is most reliable and cheapest to repair)
15)Do the ejectors function? Are they well timed - throwing out both snap caps at the same time?
16) Are there any cracks in the stock?
17) Is the chequering original? Is new chequering honest or is it disguising a repair such as a cracked stock? If the chequering is worn - is there enough wood to re-chequer?
18) Is the wood of butt or forend oil soaked?
19) Is the forend complete? (It is a surprisingly expensive job to replace the wood in a forend - almost as much as re-stocking)
20) Is the gun cased (if so, what else is in it)?

It’s quite a long list, but buying shotguns at auction is not without pitfalls (especially as far as older English guns are concerned). If you are buying a restoration project, you must ask yourself if the game is rally worth the candle. Is it really worth spending money on? Most importantly, do you have someone who can repair or restore it (if required) at reasonable cost.

Don’t Be Afraid To Ask

Let me leave the last word to Nigel. When I asked him what advice he would give to first-timers this was his answer: “Don’t be afraid to ask the auctioneer! We can give a lot of advice on the entries and where they come from - though bear in mind we are auctioneers not engineers - I virtually live among all the lots. I know where everything comes from and who brought it in. If necessary, we can direct you to a trader or gunsmith for more advice and we have measuring gauges available on site. We want people to be comfortable coming here and bidding here and we will do all we can to help.”