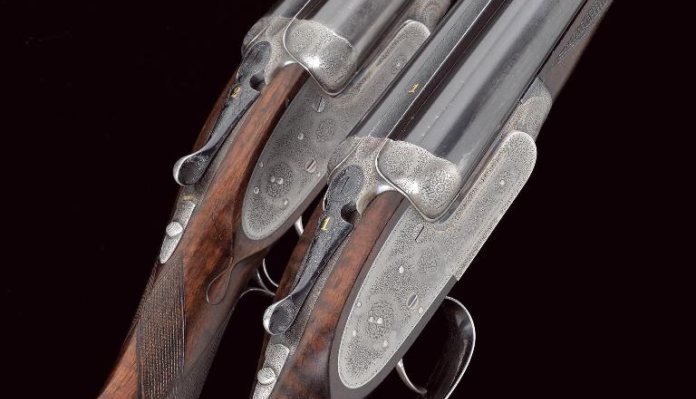 For almost 50-years there has been an auction of sporting guns and firearms at the glorious setting of the Gleneagles Hotel in Perthshire, Scotland. Traditionally held two-weeks in to the grouse shooting season at this famous sporting venue, the auction has involved Gavin Gardiner for over half of this time. Formerly the Director of Sporting Guns at Sotheby’s, the auction has been run under his own name in recent times and continues to follow the successful formula.

This year’s auction included numerable highlights for the sportsman and collector and presale viewing was hectic and busy. The auctioneers reported that more private individuals attended viewing over the weekend at Gleneagles than had been seen in many a year.

The top-selling lot of the day was a fine double-barrelled rifle by Holland & Holland. Lot 31 was a .500/.465 Royal model sidelock ejector rifle that had been built in 1955 for a European sportsman and had been used for the purpose intended. The 23-inch barrels remained in good condition with clean bores and the action retained a good amount of original hardening colour and finish. Presented in its original maker’s case it eventually sold for just shy of its top estimate at £28,175.

The second highest total was also achieved by a Holland & Holland gun. This time, lot 116, a 12-bore Royal de Luxe self-opening sidelock ejector gun, ordered in 1972 and finally delivered in 1976. Profusely engraved with foliate scrollwork and finely detailed game scenes, this was the ideal grouse gun. Short 27-inch barrels, that were recently fitted with Teague chokes, made the gun ideal for shooting from a butt where quick handling qualities are paramount. Interchangeable chokes made the gun far more versatile than just being suitable for grouse, and I am sure many a high pheasant will also fall in to the sights of this modern classic. Not surprisingly, with the grouse season in full swing, this was a hotly contested lot that sold over estimate at £19,600.

James Purdey & Sons is perhaps the most famous of all the London gunmakers, and probably more so today as it’s Swiss parent company invests a considerable marketing budget in promoting awareness of the brand. It is perhaps surprising then, that a rare pair of ‘Pigeon’ guns, lot 93, with good modern specification did not sell for more. Built in 1927 with 30-inch steel barrels, 2¾- inch chambers, heavy frames with third bites and clipped fences, this pair are as close to modern ‘high bird’ guns as you can get in vintage gunmaking.

Condition was good, though not perfect, as one pair of barrels was a little thin in the walls. This, combined with short stock length was enough to dampen interest in the pair and while £17,150 sounds like a respectable price, they would be over £200,000 if you ordered them from Purdey today.

Of course, it is easy to wonder “what if?”, but it does seem crazy that the classic English game gun is perhaps not in demand like it used to be. Market conditions, coupled with the current fad for excessively long barrels and heavy chokes has seen the traditional lightweight side-by-side game gun moved to the sidelines. Modern massproduced over-and-under guns, proofed for steel shot, with three-inch chambers and multi chokes now dominate the game gun market, as most modern shots know nothing better. Anyone who started shooting since the 1980s will have almost certainly have only used an over-and-under, and will certainly have shot clays as his introduction to game shooting. The traditional side by side will seem old-fashioned and out of date. Against this, it is pleasing then that another Holland & Holland gun, lot 124; a 12-bore ‘Royal’ model sidelock ejector gun that was built in 1928 should have proved to be another popular lot. Sold for £14,087, this gun had been restocked in the modern fashion with highly figured walnut, far fancier than the original that was also included in the lot and this contributed to it’s popularity. Wood sells, and that is certainly true, a pretty stock will often sell a less exciting gun.

R.B. Rodda built some wonderful rifles for use in India and the Empire, and lot 32 was a classic example. .577/.500 is a large calibre and benefits from being classified as a Section 58 Antique, so it is one of the few ‘modern’ hammerless double rifles that can be owned without licence. Although it was only a nonejector with a backlock action, it remained in fantastic condition, retaining much original finish and hardening colour, the bores were just about perfect and it is no surprise that is sold to a collector for £12,250.

Although the Gleneagles auction is only held once a year, it is always one of the more memorable sales in a busy auction calendar. It has a well-deserved international reputation and is looking forward to its 50th anniversary year in 2017. We look forward to seeing what is consigned for next year’s landmark auction.

Gavin Gardiner’s next auction will be at Sotheby’s, London, New Bond Street on December 14th, 2016.

For Further information on the auction and forthcoming valuation days, please visit www.gavingardiner.com, call (0)1798 875 300 or follow on Twitter @gavingardiner.