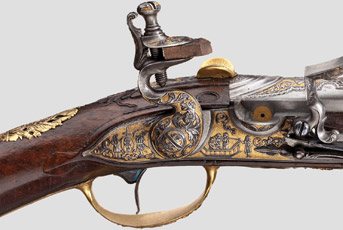 This was the final Militaria sale of 2012 for us. We start with the medal section and there were a number of lots that created considerable interest before the auction, with queries coming in from around the world. The following is a selection of some of the items sold at this very successful auction.

This group of seven caused the most interest before and after the sale, and was included in several articles in various specialist militaria and medal magazines. The group included the Distinguished Service Order, George VI (GRI type), the reverse suspender bar dated 1941, with second award bar dated 1942; India General Service 1936, with one clasp for the N.W. Frontier 1936-37, (Capt R.F.E. Chute R. Tank C); 1939-45 Star, Africa Star, Burma Star, Defence Medal and War Medal.

All in very fine to extra fine condition but with chipping to enamel on the lower DSO arm. The group was mounted as worn and attracted bids from the Internet, telephone, commission and several present in the room. In the end it was left to the final room bidder to battle it out against a bidder on the Internet. After starting at £1000 it rose and rose, finally selling for £7300.

A group of six medals: Army General Service 1902, with one clasp for Somaliland 1902-04 (Engr. Lieut. J.B. Hewitt RN, HMS Highflyer), 1914-15 Star, British War medal, Victory Medal (with Mentioned in Dispatches leaf loose, not shown in the illustration), (Engr. Commr). France: Legion of Honour Chevalier’s badge 1870 type, Russia Order of St Anne 3rd class with swords. Although mostly very fine there were minor enamel chips to the French award). The group came with a full set of miniatures. It was bought by a telephone bidder for £1700.

(Note: According to the Naval “Who’s Who” 1917, John Benjamin Hewitt was “present at the Battle of Jutland 31st May 1916, his service in action was ‘specially noted’ (London Gazette 15th September 1916), decorated Chevalier of the Legion of Honour by the President of the French Republic September 1916”. Hewitt was also awarded the Russian Order of St Anne in 1917 for Jutland service.)

Other than brass bound chests of drawers, true campaign furniture seldom comes up for sale these days so often sells well. Here is an example of a good mahogany framed late 19th century folding campaign chair. It was made in two main sections, the top with leatherette covered padded back, arms and separate cushion seat, the arms secured by catches underneath, and detachable at the hinges, the uprights and seatback fold forward, the turned legs, which end in brass casters, could be unscrewed. The frame was impressed with crowned VR stamps and it measured 40-inches high. It went to a telephone bidder for £725.

On now to edged weapons and a Dutch infantry officer’s sword, circa 1800, the curved and fullered blade 29½-inches long with a narrow back fuller, etched in small script letters near the forte ‘M.J. Chaussant’ on one side and ‘fabricant a Liege’ on the other. In its leather scabbard with locket and chape it had some wear, pitting and dents overall. It was bought by a Russian bidder for £340.

This shows a 1912 pattern cavalry officer’s sword, often regarded as the best cavalry sword ever designed, sadly right at the end of the era of horse-mounted cavalry. The blade 35-inches long etched with crowned GVR cypher in scrolled panels, regulation plated bowl guard engraved with scroll pattern overall, ornamental pommel, wirebound shaped sharkskin grip and brown leather knot, in its plated scabbard with opposing rings. The blade had a little light surface pitting and it sold for £450.

This Russian light cavalry officer’s sword was made circa 1800. It had a curved and fullered blade, 34-inches in length, etched with Turk’s heads, scrolls and flourishes. The brass stirrup hilt had a lightly engraved lion’s head pommel and plain backstrap with a wirebound leather grip. It came in its leather scabbard with long panelled brass mounts and two rings on the inner side. It went to a Russian buyer for £410.

One of the most popular swords today is the 1796 pattern heavy cavalry trooper’s sword, with a straight shallow fullered blade 34½-inches long. This example had a service altered spear point rather than the rare but originally manufactured hatchet point that would look similar to the Japanese katana. It had the regulation pierced flat guard, with reinforce and quillon, into a broad knucklebow, plain pommel and backstrap with ears and wirebound fishskin grip. It came with its steel scabbard with two rings. It was in average condition for its age with a good blade and it made £1200 to a commission bidder.

(Note. It is interesting to compare that price with the £1600 made by an example we sold in October with the scarce hatchet point. It had a 35-inch long blade and made.)

This next lot shows a Japanese sword Shinto Katana. The unsigned blade 24½-long, with O Suriage and two mekugi ana in tang. It was made circa 1700 but had a later tsuba, circa 1780, signed Echizen zu Kinai,  fuchi kashira signed Tadayuki. Mounted in an iron saya engraved with dragons. It was bought by a Belgian collector for £750.

Next is an English mid 17th century ‘Mortuary’ sword. The single edged blade of 32½-inches with rounded tip and retaining traces of an etched figure and inscription, the iron hilt with two-barred guard, the third bar bent around to form a thumb ring, the bowl chiselled with stylised portrait head and scrolls. With rounded pommel and wooden grip retaining Turks’ heads. It went for £950

Finally for the edged weapons in the sale was this good early 18th century German horseman’s broadsword. The tapered double-edged blade 34-inches long etched on one side ‘Pro Fide Et Patria’ and ‘Fide Sed Cui Fide’ on the other. The heavy steel hilt with multi barred and double shell guard with thumb ring and recurved quillons, large spherical pommel and wire bound grip. It sold for £1500.

Moving on to antique firearms now and a 6-shot .44” Remington New Model Army percussion revolver, number 15682, retaining very faint traces of barrel marks.  Showing how even fairly worn examples of American revolvers can command good money these days, this pistol, which was pitted overall, made £625.

Finally in the report is a .577/450” Martini Henry Mark II military rifle, from the Nepalese Royal Arsenal. With 33½-inch barrel the breech with various ordnance inspector’s marks, and deeply stamped to the left of the rearsight ‘N.S Nep’, the frame partly restamped with a crown over ‘VR Enfield 1873 II 2’. Walnut fullstock, the butt stamped with RM Enfield mark, Allahabad Arsenal mark, and dated 1894, with sling swivels and correct cleaning rod. Although it had some service wear it was in reasonable condition and sold for £600.

The next sales at Wallis & Wallis are on 19th March 2013 and 30th April – 1st May 2013 (The Spring Fine Sale). The last date for entries into the Spring Fine sale is 23rd March. For further information contact the saleroom on 01273 480208 or visit the website at www.wallisandwallis.co.uk

First-class artefacts from the Tsarist Empire caused a flurry of excitement at Hermann Historica last November. Prior to the auction, a flintlock shotgun from Tula, dated 1741, that had belonged to Tsarina Elizabeth Petrovna (1709 – 1762), had been the subject of lengthy discussion among experts. With a starting price of 60,000 euros, the rarity and verifiable provenance of the elaborately engraved and gilded gun with iron chiselling, together with its museum significance, were reflected in the sensational result of 145,000 euros.

Among the other exclusive antique firearms were a pair of double-barrelled hammer pistols from the workshop of the gunsmith Ferdinand Reuss in Mehlis, circa 1880/90, offered with the matching case. With their gold-inlaid signatures, beautifully grained root wood stocks and extremely fine vine engraving on the furniture, they made an excellent impression on the collectors and consequently were bid up to 23,000.

Also for sale was an exquisite cased pair of flintlock pistols, Prochaska, Chrudim/Bohemia, dated 1824 and complete with extensive accessories. These fine specimens were sold for 15,000 euros. In addition, a wheel-lock rifle manufactured and signed by Gabriel Dorn in Nuremberg dating from 1663 realised a hammer price of 13,000 euros.