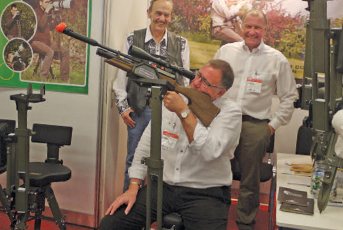 There’s no doubt about it, Steve Rowe, the headman at Napier, comes up with some really clever ideas - and he knows how to showcase his products too… However, this year he outdid himself at IWA, not only with a great new product but also a really clever presentation – a lifesize picture of a 4x4 vehicle but with a real boot section and tailgate attached… giving a tangible 3-D effect!

Attached to the interior lock of the tailgate and the lock plate on the floor of the vehicle was one of the simplest yet cleverest devices from Napier yet – the APEX Autoclick. It’s aimed at the deer hunter and offers a carcass handling system used in conjunction with a vehicle - but not necessarily a 4x4 - as the APEX AutoClick can turn any hatch back, estate car or SUV with a vertically lifting tail gate or rear door into a hanging frame. Absolutely no tools are required to attach this device and it simply clicks in or out in seconds.

The kit consists of an adustable telescopic alloy strut with a polymer toe section that fits into the base of the tail gate lock well, at the other end is a steel eye that clips into the actual locking mechanism. You also get a gambrel which hooks the deer up by the back legs for easier handling and gralloching. A 2-litre hanging Aqua-Sac with spray head is also included for washing the carcass, and the whole kit comes in a carry bag and weighs just 700-grams.

The AutoClick uses the base of the vehicle to take the weight and not the tail gate, which only acts as a locating point. It’s rated up to 165 kg (365 lbs) so should be able to handle any deer with the exception of the bigger reds. The system is designed for estates and hatchback type cars but not saloons or vehicles with side-opening, split or open-down tail gates etc.

This is another great idea from Napier and gets our pick as a Best of British accessory - and it comes at a good price too!

The Nite Site stand at IWA was unbelievably busy, so much so that we had to wait to the last day to get a chance to talk to them about the company’s remarkable success with its night vision units.

Here is a novel design of digital night vision (NV) developed in the UK by brothers Dave and Phil Craven with their original NS50 unit which is useful for shorter range work (50yds) on air rifles and rimfires, while the NS200 is more powerful and intended more for centrefire use on foxes (200yds).

Powered by a 12V battery, this system uses two modules which just attach to your own day scope. The first attaches to the top of the scope’s tube and has a 3 inch LCD TV monitor facing the shooter and an infrared illuminator facing the target. The second module is a camera unit that attaches to the eyebell of the scope and picks up the image illuminated by the IR beam which is then displayed on the rearward-facing TV screen. The system is quick to fit with two eyepiece adaptors for the camera unit and quick fit adapters for an inch or 30mm scope tube. The battery pack attaches to your stock and lasts about 5 hours.

Because the NS units relay the image produced by the IR beam through your scope there is no change of zero, you can still use the parallax adjustments and even the illuminated reticule if fitted. Your reticule from your scope is superimposed onto the quarry as viewed on the TV screen thus acting as your sight.

The NS50 and NS200 have proved very popular since their introduction, and get our pick as Best of British accessories not only for the original design, but also for the way that it has been developed in such a short time. Despite rapid expansion the company listens to its customers, and because it is still a relatively ‘hands on’ enterprise, it is willing to make changes and improvements – and this can be done quickly and effectively.

We met up with Hamilton Shooting at a busy corner of the IWA, where they were attracting a remarkable amount of attention with the new SlipStand, a shotgun slip with a big difference, as it also serves as a covered gun stand.

The SlipStand will hold any shotgun with a maximum barrel length of 32”. It has what Hamilton call a ‘Quad Layer Protection’ consisting of a padded water resistant outer layer, a secondary semi-rigid polythene layer to resist impact, piercing or crushing, a half inch layer of shock absorbing polyurethane foam and finally a dark coloured soft fur flocking material to protect barrels, action, forend and stock from scratches or other marks. A double zip encloses the slip which also has an umbrella holder and a deep zipped external accessory pocket.So more or less, just a high quality gun slip… but here’s the difference; the SlipStand has integrated sprung legs that automatically open into a ‘bipod’ position when the shooter puts it on the ground base first. The base of the slip has a cam system that instantly deploys the legs, while the act of picking up the case reverses the process and the legs automatically retract. When the legs are in the ‘open’ position, unzipping the top of the SlipStand allows the shooter to partially withdraw the gun and leave it broken open in readiness, while still being fully protected.

The SlipStand is a well made innovative piece of kit which is available in a range of colours and materials including top-of-the-range leather. It’s easy to see that this company will be going places fast – we wish them well and have no doubt in awarding the SlipStand our vote as Best of British.