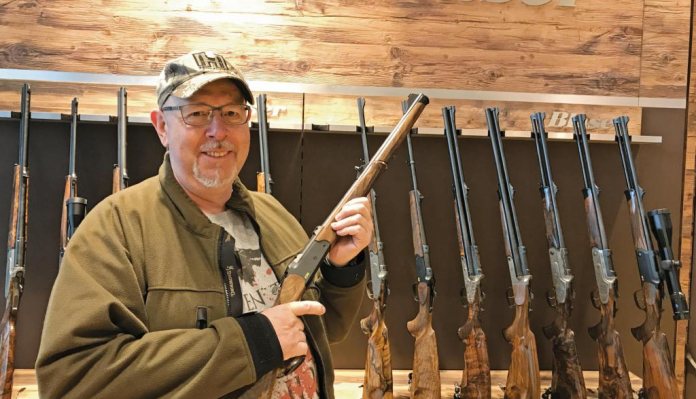 In the late 20th century, one rifle stands out as possibly the most radical design; Blaser’s R93. I say this for two reasons, as it was the most popular model in Europe and even in the more traditional UK it found favour with all types of shooters. Selling over 200,000 units worldwide, why? Well, its straight-pull (2-stroke) action was fast and practical, as was its ability to change calibres by the simple expedient of swapping barrels and bolt heads. However, I did not like it, sure it was accurate (always a bonus) and the ability to change calibres was genius. But it only offered a fixed magazine that had to be loaded/unloaded from the top (LRS version excepting), which just didn’t work for me! I recall at the IWA 1999 show being asked to leave the Blaser stand, as one of their staff asked me what I thought of the rifle and I said: “nice but I don’t like the feed system”; if you don’t want honest answers never ask me leading questions”

Cast out into the wasteland, I soldiered on with my Mauser M03 and other turn bolts. However, in 2008 Blaser did the thing that many fans had been waiting for; produced a detachable magazine version of the R93; the R8. I was impressed; all the best things of the R93 but with a practical feed system, and when they brought out the thumbholestocked R8 Professional Success I actually opened my wallet and bought one. Great looking rifle with 100% ergonomics, I only wish I’d had the money for the version with leather inserts, as it looked the business. My daughter Chloe, who is at university doing design, also liked it and I asked her why? She said: “there’s an expression in the design business called a ‘smile in the mind’; meaning there’s just something right about some products, images or slogans that grab you.” Well, I was grabbed!

However, and though the R8 is doubtless Blaser’s flagship product, there’s a lot more to the company than that, as I discovered when I was invited to have a look around by their head of PR Alexandra Baur. Based at Isny in South Germany I’d been there before about 9 years ago to visit Mauser. You may not know it but they are part of the L&O Hunting Group that also owns Blaser and Sauer, with Blaser originally sharing the factory with Mauser, Sauer were then still at their old premises.

Stepping out of the car, I was confronted by the modern and minimalistic grey office building with the simple Blaser logo; most pleasing. The main factory building is now all Blaser, with Mauser and Sauer sharing another within the complex. Ironically, Horst Blaser, the man who started Blaser in 1957 and designed the Diplomat drilling (multibarrelled rifle/shotgun) and also bolt-action, still lives on site. However, he no longer has any connection with Blaser, as he sold the company pre-1993 and also had nothing to do with the design of the original R93.

The initial impression is one of a company that is totally aware of its worth and image; some might think arrogant, but that’s not the case, as they are passionate about all aspects of hunting and also consummate professionals! I recall, pre R8, when Blaser was handled by Beechwood Equipment many years ago, they had some issue with the material used for the trigger pins on the R93, which caused some problems. Blaser identified the guns that could have been affected and did a world-wide recall at their expense to replace them. As it was, the problem was not as big as foreseen, but they still changed them all, I can think of a few companies that might not have been so honest! They are not large, with just 350-employes, but command a large portion of the firearms market, due to their products and reputation.

To be honest, the factory could easily be mistaken for any modern production facility, as it does not look like it makes guns. Everything is CNC-controlled and robotassisted, with machines producing actions and components to high tolerances, which we have come to expect from modern firearms. But there’s also the human touch at the other end of the production line, as all guns are hand assembled and checked for correct operation, fit and finish. All are also shot to confirm their ability and Blaser has its own proof range, which government inspectors come to put the final stamp of perfection on the various models.

Alex told me that as such Blaser does not keep a stock of products, as say a company like Remington would do. The reason being, you go to your dealer and order your gun, which offers a deal of choice on barrel and stock options and decoration, then use their gun configurator programme to make your selections. This is passed onto the country importers/ distributors that place orders at the factory. For example, in the UK this would be handled by Blaser Sporting Ltd. I recall when I ordered my R8 Professional Success in 270 Winchester with iron sights I waited a few months for it to arrive.

However, it’s not all about the R8, as Blaser offers a comprehensive range of models that includes shotguns. Their F3 is a competition grade over & under and one of the top choices for professional clay shooters. Recently, they launched the F16, aimed more at sporting shooters, which has gone down very well!

The R8 speaks for itself but there are other rifles too. The R93 has now been discontinued, but Blaser’s website urges owners to get in contact if they need spares etc, as there might be some availability. There are three more rifles, all based on more traditional, break-barrel actions; my favourite the sweet little K95, single shot Kipplauf! Next, an identical pair of combination over & under rifle/ shotguns the B95 and B97, they differ only in the fact the former needs re-cocking between barrels, whereas the latter fires the second with another pull of the trigger.

Finally, the BD14 (Bock Drilling), this is a three-barrelled design, with an over & under layout with a third tube on the right side. The top one is a shotgun, the lower a fullbore rifle calibre and the one on the side a .22 centrefire option. Check out their website for calibre options. Like the R8, these guns all use a manual de-cocking mechanism, along with Blaser’s universal, QD scope mount system.

A big part of the attraction of Blaser’s guns is customisation, which can go from the sublime to the ridiculous, as my next port of call was their custom shop. We went around the wood shop first and I have never seen such a massive collection of quality timber; OK, not a fan of expensive wood but I still appreciate quality when I see it and it was staring me in the face! Also, some unusual experimental furniture, made of resin with items like wood and metal shavings moulded in. Decoration is covered by many items, from metal grip caps with animal engravings etc. and of course there’s a fine choice of engraved and plated actions and components.

Speaking to the shop manager, I asked what they were capable off and he said; ‘anything that is legal’. I asked could he make a double barrelled R8 and he smiled and said they had already done that for a client. Again, I’m not a fan of engraving but I was shown a K95 custom with the most amazing Roe Buck head worked into it. Money better spent elsewhere on barrels etc, but on reflection the chance to have a unique firearm is perhaps more attractive than I might have thought!

Then on to the active outfits and clothing. Blaser really does make some nice gear, with product to suit all climates and conditions. Smart really, as buying into the brand makes you part of something special; so, you are well suited, booted and armed. But there’s more, as they now offer a series of moderators and their Carbon bipod, which was designed by Spartan Precision Engineering and is an off-shoot of their own Javelin product. Plus, their new binoculars and for the future rifle scopes!

No visit to the Isny site would be complete without going to their magnificent cinema range. This 50m indoor facility projects films of every game species on the planet on to the back stop that you can shoot at with fullbore ammo. I naturally chose all the boar scenarios, as I never miss a chance to brush up on my driven pig shooting.

Overall, an enjoyable and eye-opening visit, as it allowed me to get a look inside the mind and ethos that is Blaser Jagdwaffen GbmH. My thanks to Alex Baur for the invite.