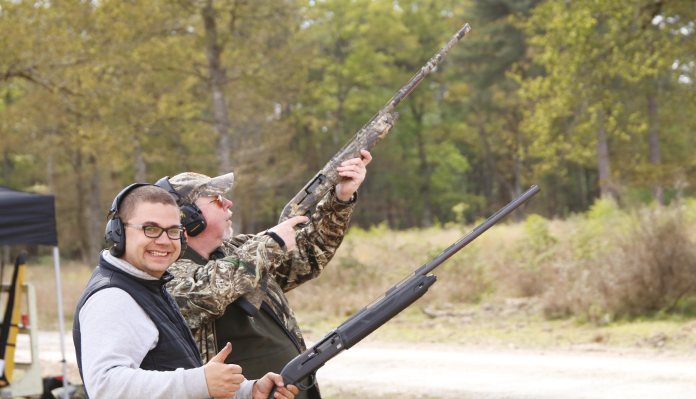 I’ve said it before and I’ll say it again; Browning do have the knack of organising some great press events; from hunts to new product launches, and in my time, I have sampled quite a few. This year, it was France. The venue was a magnificent property owned by a multi-millionaire, who is also a passionate hunter, which had two rifle ranges and more shotgun set ups than you could shake a stick at!

New products included the Browning X-Bolt Chassis and the X-Bolt McMillan, along with the improved Mk II Maral straight-pull. Plus, their new Nomad, quick detachable scope mounting system, and Kite optics range! Shotguns consisted of most of their B725 and B525 series in Sport, Pro Trap and Hunter configurations. More in my comfort zone was the new Winchester SX4. Plus, we had a special guest and some tactical rifle instruction.

So, what do you think?

Normally with these events you sit down and get bombarded by product information, which does get tedious! Pleasingly, this year Browning took a more interactive approach. Their thinking was that we had all seen most of the new stuff at IWA, so briefly talked about it to fill in any blanks. Then, we were broken up into groups for sessions where we were asked to say what we really thought about the various product lines. How refreshing, as usually from my experience, companies do not like negative or should that be honest feedback?

But the Browning crew wanted it warts and all! This was not just a slagging match, as that would have been unprofessional, as they came back with valid reasons for most comments that we end-users might suffer from. But there was some odd looks too and lots of hurried notes being scribbled down for later consideration! This cleared up a lot of confusion and certainly opened my eyes to how they now do business. Though a small thing, my pet hate is the huge stickers they apply under the barrel of all their rifles and shotguns and the same for Winchester. The glue they use is seriously sticky and is a bugger to get off. You peel off the sticker, then have to get solvent to remove the glue underneath! They smiled and agreed, but explained that up on the barrel it stands out in a gun rack; fair comment!

My primary interest was the rifles, scopes and mounts and ever since I had seen the new X-Bolts (Chassis and McMillan) at the IWA I was desperate to test them and I can’t complain. I was less enthusiastic about the shotguns, as I consider myself a poor shot. Our group consisted of Tim Pilbeam (freelance writer), Dom Holtham (Editor) of Sporting Shooter, a reprehensive from Sporting Rifle and Charlie Jacoby (Field Sports Britain) and me flying the flag for Shooting Sports and Gun Mart.

We were on a 300m rifle range and had an ex-French Special Forces rifle instructor, who filled us in on his tips and techniques. For me, the best thing was his approach to unsupported shooting, something I’m not that good at. He recommends the supporting arm in at 6 o’clock to provide a stable base, with the firing hand elbow up to push the butt into the face. Followed by exhaling all your breath and taking the shot in the last few seconds, before you want to breathe in again. And it worked, very soon I was consistently hitting a 6” steel gong at 100m free standing.

However, for me, the highlight was the X-Bolt Chassis and McMillan. The former is the standard X-Bolt action with a medium/heavy fluted barrel with muzzle brake, in an MDT chassis with polymer panels, fully adjustable butt and pistol grip. Chambered in 308 Win only, it proved excellent. The McMillan reminds me of Remington’s 700 Sendaro. With its long, 26”, mid-weight, fluted barrel, invisible muzzle brake and their Game Scout stock, it was sweet to shoot and capable. Our example was in 7mm Rem Mag and recoil was most acceptable. I can see both being popular in the UK!

The next day was a mix of shotgun and rifle and proved to be both fun and instructive. We started off on shotguns, as the grounds have some amazing layouts, with the big automatic traps. Adrien Koutny (Browning Event Organiser) told us that they did not want to take any ammo home, so it was our duty to expend it all. He said we had 25,000-rounds to cut through; well, you don’t have to tell me twice!

Stand 1 was a warm up and I was doing my usual average to crap performance and not really enjoying myself. Stand 2, well here the epiphany began. There were no semis, so I switched to a B725 Sport and started to get my eye in, the others were all better than me but suddenly it all came together and I was dusting those clays like there was no tomorrow. It was tiring, as we each had 100 clays per session, which we did more than once.

Then we started shooting with a loader; Charlie was up first and I was loading for him. Getting into a cadence he shot and passed me his empty gun and I gave him a full one and so it went on. Then we switched around; this was my sort of shooting, as there’s little thought with instinct taking over. I have to say my ability with a double gun went through the roof that day!

After lunch, we got our second mystery guest; Winchester exhibition shooter Raniero Testa, who holds seven world records for clay shooting. He was a bit of a strutting peacock but boy, could he shoot and I had to admire him for his show and showmanship, which was amazing. At one stage, he was going up and down on a hover board shooting his high capacity, Winchester SX4 from behind his head. Another, he was firing one round then firing again to hit the first ejected case. I have also never seen anyone shoot so fast with a semi-auto. The trick, as I discovered, is to let the recoil do the work and keep your trigger finger rigid. It’s worth going on YouTube to see his show!

It was then onto the running boar range, with a selection of Browning Marals and BAR semi-autos in 308 and 30-06. Good stuff, as I never miss the chance to practice my moving target skills. Next, the most intensive time I have ever had with a rifle! In keeping with the need to burn off the ammo, we did two, 2-man team shoots against each other – one loading and one shooting. With two BARs and a Maral apiece we bombed up the mags and let rip, keeping the shooter fed was hard work. I’m not sure how many rounds I put through the Maral, which had a 10-shot mag but it got so hot we put a lump of ice on the barrel and it literally boiled off! Plus, the cocking handle knob kept unscrewing after about 300-rounds. OK you are never going to shoot that much, but the ability to push a gun way past its limit and still see it functioning was interesting. I think we managed to cut through all the rifle ammo, which was no mean feat!

The Kite optics, though offering a small and simple selection, proved high quality and I’d be happy to use them on my rifles. Equally so the Nomad scope mounts, with one version allowing you to zero one scope to two rifles and swap them over; clever!

Then some more high and low pheasant, with doubles with and without loaders; again, I was cooking with gas by this time and pretty much hitting everything that came over. Hot, tired and happy we went to the final stand. Using SX4s, we were lined out facing a thick line of fir trees with traps behind; straight on, left and right. This proved fast and furious and we did it with and without loaders, we finally stopped with near glowing barrels and probably a box of ammo left between us. Adrien was loading for me at one stage and cut his thumb badly but still kept on whilst bleeding all over the gun, the crazy bugger!

Finished and washing down a few cold beers to get the taste of powder out of our mouths, we went to the owner’s private trophy house (yes house) for a look around. I have never seen so many full body mounts in all my life, of every species you can imagine. I have to say it was a bit weird to see so much, I have hunted a lot and killed my fair share of animals in my life, but seeing 13 lions in one room seemed a bit excessive! But each to their own!

Overall, an excellent and different trip, that certainly ticked all my boxes as well as going hands on with some new equipment that we should be seeing in the magazine soon! My thanks to Adrien Koutny and the Browning crew for the invite; it was literally a blast!