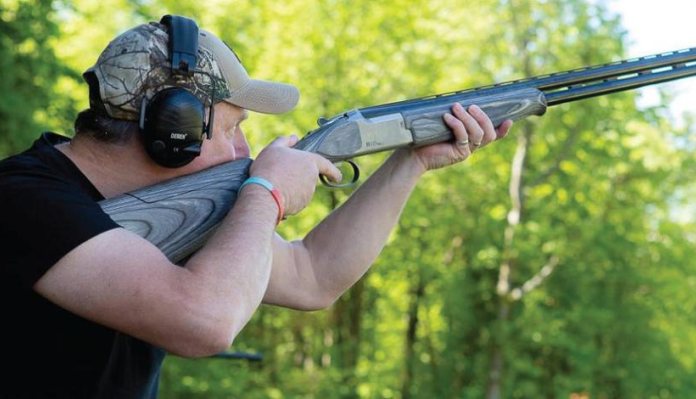 Unfortunately, I missed out on last year’s Browning trip to Poland due to a chest infection, so I was determined that I wouldn’t miss out this year! Slovenia was the destination of choice and what a beautiful country it is! Imagine Austria, Switzerland, Italy and Croatia all mixed together and you get the idea. Large expanses of relatively flat farmland and then mountains, with not much in between – you’re either on the level or at 45º.

The venue was an absolutely stunning private shooting ground and Browning’s Adrien Koutny and the team welcomed us and then presented us with our personalised ‘BSB’ backpacks; BSB stands for Browning Small Bag and, as well as being a handy 12 litre rucksack, it also features a clever pouch that drops down when a zip is opened, it can then be used to carry a rifle via a couple of adjustable straps.

We were all obviously keen to get to grips with the guns and do some shooting and boy, did we ‘turn live into empty’! My group, which included several Brits, Chris Parkin amongst them, were able to try our hand with several Browning and Winchester shotguns, both over and under and semi autos. I must admit that as someone who usually shoots rifles, my shotgunning abilities are not exactly outstanding and at first, I just couldn’t get my eye in! However, I was using a rather nice Browning B525SL with a lovely grey laminate stock and I soon began hitting the odd clay, then a few more, until I was actually hitting more than I was missing. I then moved on to a 725 Trap with a high rib and this felt even better, as everything seemed to line up for me better. I had a good look at the shotguns and I can see why Browning are still king of the hill as they did invent the over and under after all!

I also got to grips with a lovely Winchester SX4 semi auto, which felt more like a rifle and I was getting the odd 3 out of 3. One thing that helped my shooting was the never-ending supply of cartridges; we certainly got through a lot of ammo! We also had the chance to shoot a high-capacity SX4 against the clock, with stationary clays as the targets (much more my kind of thing) and we enjoyed the smooth, incredibly fast action. The SX4 is actually the fastest semi-auto available and Raniero Testa recently achieved a World Record with one.

Next came the Winchester XPR bolt action rifles fitted with Kite Optics scopes. We had a selection to choose from, including the Hunter Compact with a synthetic stock in Mossy Oak Break Up and another in True Timber; they both shot well with the Extreme Point Copper Impact ammo, but I did best of all with the ergonomic laminate thumbhole version. We were really enjoying ourselves, but unfortunately the weather decided to get rather nasty (absolutely torrential rain!) but I noticed that we would be able to shoot out of the building that housed one of the clay traps, so we managed to continue from a dry position again.

We returned the following day when the sun shone for us and the rain stayed away. I got a great group at 100 yards, but I’m very proud of the one I shot at 60, where two bullets went into the same hole and the third only leaving the first two when I stupidly shifted position slightly.

After lunch, we were kitted out with an excellent XPO Pro RF Parker, waterproof shooting jacket, part of the Browning range, much of which we were shown. It has a waterproof, windproof and breathable Pre-Vent™ membrane to keep the rain out but also let perspiration out. The Primaloft insulation system gives you the warmth without bulk and there’s an adjustable, removable hood. The shoulders have reinforced panels that stop rifle slings slipping and the elbows have extra material to prevent wear in the prone position. There are two handwarmer pockets on the front that have press studs fitted; the left one has elasticated loops for rifle cartridges. There are four more zipped pockets on the chest. A rear game bag pocket is fitted and there are extra zips on the sides for ease of movement.

We were later taken to a cold room used for processing game, where we were lovely and warm thanks to this great jacket – the traditional local ‘antibiotics’ (booze) that we were given also helped keep the cold out!

The second day saw more excellent shotgun shooting, but we were given the chance to shoot Browning BARs and Maral straight pulls in 30-06. A trap was set up so that it launched ‘rabbits’ (clays bouncing along the ground in front of us from right to left) it was a real challenge but the rifles were fitted with K1 red dots which allowed both eyes open shooting and we did actually connect with a few! The K1 is parallax free, has an 11-position illumination dial, the lens has MHR Advanced+ Coating and a 2 MOA Red dot

I must admit that the Maral was my favourite, as it has a silky-smooth action, with the bolt handle perfectly positioned for a rapid follow up shot or more, as it is fitted with a detachable 10-shot magazine.

We eventually started shooting against the clock and our speeds were quite remarkable and, once again, thanks for all the ammo! If I were off on a driven boar hunt, a Maral would be the tool I’d want to take.

After lunch, we were driven further up into the mountains, where we got to shoot the Browning X-Bolt range of rifles, including the Pro Long Range GRS, which looks absolutely stunning, with the laminate really showing off the stock’s contours. The SF MDT chassis rifle was also a stunner and shot very well. I was offered the chance to shoot a simulated hunt, so strapped one of the GRS equipped rifles into my backpack and set off up the mountain with half a dozen others following the extremely physically fit guides; I didn’t think that I’d make it but I surprised myself and the backpack took the weight of the rifle with ease and I can see me using it in the future when out foxing. Unfortunately, the simulated hunt turned out to be a bit of a wild goose chase, as the targets hadn’t been put out – oh well, the scenery was stunning!

I’d like to thank Adrien and the team for the great experience and if you’d more information, go to browning.eu and also Chris Parkin for several of the photos.