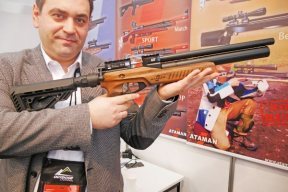 One of the first –if not the first- to produce a bullpup PCP with centrally-located cocking, Czech airgun manufacturer Airgun Technology are still without a UK dealer for their neat, fully ambidextrous, Vulcan model, this year offered in a dipped camo finish.

Ataman is Russian who produces a rifle that is both sturdy and accurate. It comes in many guises, but the target version is most impressive. That said they had an Ultra Compact with a folding telescopic AR stock that I think would be a great gun for shooters young and old, big and small. I can’t say it’ll make it to the UK, but I do know Daystate are looking at bringing in at least one target-oriented model and I’d like to think they had room for this one too.

There are welcome signs of a renaissance in Brocock’s fortunes and nowhere are these more apparent than their new Compatto (compact, in Italian) a semi-bullpup. New features include: a clever trigger that provides a crisp and creep-free break; a laterally-pivoting, safety within the trigger guard; a multi-shot side-lever action that uses a new 10-shot clockwork alloy magazine, a power adjuster giving a maximum of 30 ft/lbs in FAC format; a shrouded barrel with a threaded and capped muzzle; a skeletonised thumbhole stock with a butt-pad that’s adjustable for height, pitch and cant, and a choice of black or olive-green soft-touch finishes. Prices remain keen, with the Compatto due to retail at just £585.

The Birmingham-built Gamo Coyote is a PCP with a proper pedigree at a bargain price, but it’s fair to say that quite a few people didn’t like the look of its stock. If you felt the same way, then look again, because it’s now available in a synthetic thumbhole version. Made from black polymer with grey rubber inserts, it shows a much more rakish appearance and has a height-adjustable comb for a perfect cheek weld and sight alignment.

Cometa’s take on the current trend for bullpup PCPs looks like the fruit of a tryst between a wayward Evanix and an opportunistic Kalibrgun. Still at the prototype stage, 2 variants were on show: standard and shorty, and in a choice of natural wood or black synthetic, the latter sporting a short Picatinny rail under the fore-end and a more basic intermount. There is also a carbine with a stutzen full-stock, complete with dark-wood Schnable tip. Cometa’s current production PCPs show a more conventional build and layout, though their walnut stocks do feature an adjustable cheek-piece.

American airgun giant Crosman were rolling out the big guns again this year –literally! Heading the line-up is an imposing big-bore bullpup PCP, the Benjamin Bulldog. It’s fully-railed aluminium and polymer chassis houses a shrouded, suppressed barrel, a 340 cc cylinder, and a reversible (right- or left-hand) lever-operated action that takes 5-shot magazines in .357 calibre and delivers 200 ft/lbs at the muzzle. As such, it takes over from their previous big-bore the Rogue. It may use the same ammo, yet it is more compact (36”), lighter (7.7 lb), has a higher shot capacity (10), and does away with the electronic complexity of its predecessor.

The Benjamin Armada Magpul sees the company’s flagship Marauder model dressed in an alloy chassis featuring a quad-rail hand-guard, a Magpul MOE pistol grip, an MOE telescopic butt complete with a cheek riser and rubber pad and rail covers fixed via Magpul’s M-LOK accessory interface. As well as QD mounting points in the butt and hand-guard, there’s a Harris-style bipod, 4-16x56 AO mil-dot scope and mounts. At its heart is a 10-shot bolt-action PCP with 215cc air reservoir, a power adjuster giving a maximum 32 ft/lbs, a bolt that can be reversed for right- or left-hand operation, a 20” barrel with a sound suppressing shroud, and an adjustable 2-stage trigger with a metal blade. The Armada Magpul is offered in .22 only and delivers over 30-shots per charge at full power.

Daystate’s Pulsar bullpup is a joy to look at and handle. The technical expertise that has gone into designing and making this rifle is simply exceptional, as is the quality of materials, fit and finish. Then there are the little touches: a spirit level built into the rear of the intermount; a laser sight built into the front end; an accessory rail under the hand-guard; a soft-touch polymer cheek-piece insert; a 3-way adjustable recoil pad; a lever action that can be switched around for left-hand use; and of course a digital display on the side. The first models are in grey or camo laminate, with a special edition Oro (Gold) Series in high-grade walnut with a gold-plated cocking lever, barrel collar, trigger blade, and muzzle detail. These will shortly be followed up with a black synthetic version with a soft-touch stock and carbon-fibre-look cheek-pieces. This is going to be a landmark rifle for Daystate!

FX’s Impact sports a skeletonised build with a short-stroke biathlon-style side-lever mounted above an AR-style pistol grip and safety, removable 480cc carbon-fibre buddy bottle, height-adjustable butt pad and comb, a genuinely match-grade adjustable trigger (on a bullpup!), an action body equipped with Picatinny top side and bottom rails, and a shrouded and suppressed Smooth Twist barrel. There’s also a power wheel giving a choice of 5 settings, an externally-adjustable regulator and valve return spring for fine tuning, a quick-change barrel system, and high-capacity magazines that hold 19 pellets in .177 and .22, 17 in .25 and 14 in .30 calibre. The FX Impact comes in satin silver and black finishes and has an overall “WTF” factor that goes off the scale. If that’s too radical, then there’s the Wildcat, which has a conventional cylinder and slate-grey soft- touch polymer stock, and no side rails, but a similarly-placed operating lever.

One of my favourite recent airgun designs is the Kalibrgun Colibri (Hummingbird). It’s a beautifully neat little bullpup, with its cocking handle amidships on the left, its cylinder ahead of the trigger guard under the shrouded and suppressed barrel, and its 14-round magazine tucked into the butt. Air gets from the cylinder to the breech via a slim transfer tube that hugs the contours of the intermount. The intermount is topped with a Picatinny rail. The Colibri is billed as a semi-auto, but in fact it has to be manually cocked for each shot and it is only the magazine that indexes automatically, making it UK legal. I gather Blackpool Air Rifles is taking orders.

Korean airgun giant Meca Evanix has a track record of pushing the envelope when it comes to PCPs. This year’s offering shows a new, minimalist, concept: and I like it! Evanix’s new Rex is a modular PCP reminiscent of the Gunpower Stealth, but slimmer, meaner and altogether better executed. You can buy the Rex in pistol (P), carbine (KT) and rifle formats and in each case the stock is a 200cc air cylinder fitted with a butt-plate, there’s an AR pistol grip amidships and up front a ventilated hand-guard shrouds a fully-suppressed barrel. The action is single-shot only, and the skeletonised trigger guard doubles as a cocking lever. Weight is minimal, at around 1.5kg for the pistol and around 2kg for the rifle and carbine, but calibre choice is literally huge: i.e. everything from.177 to .50!

A new name in the airgun scene, Nova Vista are about producing affordable airguns that are fun and full of features. I was about to walk past their stand, but development manager Toby Young caught sight of my press badge and made sure I didn’t! His enthusiasm for his products was contagious, however, and I came away thinking that their strikingly-named, military-styled or brightly- coloured break barrel and multi-pump pneumatic guns –The Phantom Elite, Delta Storm and Spitfire- would play a key role in bringing many youngsters into real-impact shooting from the gaming and airsoft worlds.

Remington’s remarkably-good, budget, break-barrel air rifle, the Express, is now available in several new formats. There’s a Compact with a shorter stock and barrel; Synthetic with a black polymer stock, the XP with a hardwood stock and moderated barrel and a Tactical XP version the sound moderator and a marbled grey synthetic stock. All come fitted with a 3-9×32 scope and mounts.

SIG are clearly on a mission to promote their brand in the airgun market and have launched new rifles and pistols for 2015. All are replicas of their centrefire designs and solidly built to match the weight of the originals, have fully-functioning controls, and are available in black or FDE.

The rifles are copies of SIG Sauer’s MPX PDW and MCX carbine and are available in both CO2 and PCP format. Better yet, they shoot pellets: .177 and .22 in the CO2 version and .22 and (yes, seriously!) .25 in the PCP version. In both versions, the relevant cylinder is housed in the buffer tube. The new MX guns are also semi-autos, feeding from a polymer strip magazine that holds 30-shots and is housed inside a detachable, full-sized, dummy magazine. What’s more, high capacity 50 and 70-shot versions are available separately. Barrels are rifled steel and the guns have an electronic trigger that in its original configuration permits burst and full-auto fire. However SIG will sell semi-autos in the UK subject to legal approval. Rifles offer higher power and capacity, greater accuracy and authenticity and greater all-round sophistication, however, so their introduction into the UK will be a real test of the water here.

The pistols are modelled on SIG’s striker-fired P320 and classic P226 models and come in black or FDE, and in standard and suppressor-ready versions. Available in .177 calibre only, they feed pellets from a detachable, reversible, dummy magazine with an 8-shot rotary magazine at each end.

Tesro are a name to look out for now that they have a distributor in the UK in the shape of Dave Mills of ATEO/X-Calibre. Dave knows –it is fair to say- a fair bit about target shooting with air guns, and he reckons Tesro’s RS100 rifles and PA-102 pistols offer all the performance of the bigger names at a substantially lower price. Each gun is available in Basic, Pro and Signum grades, but impressive accuracy comes as standard.

Walther’s already fine range of air rifles was looking better than ever this year, with the introduction of a stylish new stock for the LGV break-barrel; a synthetic-stocked version of its simpler cousin, the Century, and limited-editions of deluxe and super-deluxe LGVs, LGU under-levers and Rotex PCPs. Prices for the limited editions, which show select walnut stocks with a hand-rubbed oiled finish, classic chequering, and highly-polished, deeply-blued actions are understandably steep, but there’s a lot to like in the standard versions too.

In 2014 Webley launched a BB-firing CO2 replica of their iconic Mk6 service pistol. At the time I was a little disappointed that it had a plain black finish, but now they’ve added a Battlefield version with a “distressed” finish that gives it an authentic vintage look, as well as a WWI pattern leather holster to go with it. No word of a lanyard, though! All the same, no proper chap should be without one!