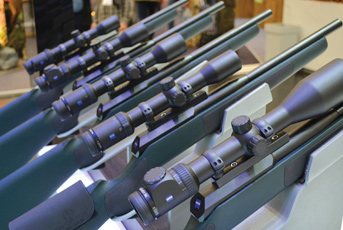 Chris Parkin and Jules Whicker gives us a look at the firearms and associated gear at the show.

First port of call was Sauer where I saw the new Synchro XT Compact rifle with a short/ heavy barrel. It actually looks like a sweet short TAC rifle and alongside other Sauers, is now being factory screwcut. The 202 Genghis Kahn special was beautiful but well over the top on looks and price. They were also showing a UK Six - an engraved 202 with all the British deer species on it. Talking to Jamie Garland (Sauer importer) the not inconsiderable asking price will include stalks of all these species.

Tactical rifles were a little more subtle this year with fewer 50 cals on display but on the Riflecraft stand was the new Barrett MRAD with interchangeable barrels, bolt faces, a folding stock and two part upper AR15-style. I should have one on test soon and in 308, it looks like it will shoot sub ¾ MOA forever!

Of more interest was the gradual birth of the new 557 centrefire rifle. Currently only available in limited specifications like carbine and Lux, they will no doubt trickle through to more styles as the simple two lug push feed bolt with claw extractor and plunger ejector simplify the design from the former Mauser origins.

This is the first rimfire from this premier Russian rifle maker, and it looks good. Chambered in .17 HMR at present, it shows a skeletonised laminate thumbhole stock, grey, bead-blasted action and barrel, receiver-mounted Picatinny rail, a knurled cylindrical metal operating handle, a rear thumb-piece for accelerated operation (open with a finger from the side, close with your thumb from the rear), a crisp single stage-trigger, a muzzle brake, and driven game sights. If we ever see it here it should slip in nicely between ISSC’s version and Anschütz’s peerless – and unrelated - 1727.

When Sako discontinued the original Finnfire in favour of the Quad it caused quite an outcry, and though this was largely assuaged by the introduction of the wood-stocked Quad Hunter Pro and Varmint, it seems there was still significant demand for a fixed-barrel rifle with an all-metal bolt. The result is the Finnfire II. It’s available in .22 LR and .17 HMR.

Development has been slower for ISSC-Austria’s SPA straight-pull rimfire, but production versions in both wood and synthetic stocks were finally on show this year, and I’m told the AI AW-styled Tactical version will be joining them soon. It’s based on a tried-and-tested Russian biathlon action, and the overall build looks significantly more solid and reliable than ISSC’s MK22 semi-auto, which it took Anschütz to get right (ish). Available in .22 LR, .22 WMR and .17 HMR, and in rifle and carbine versions, Highland Outdoors will be distributing them in the UK.

It took me a while to notice CZ’s new rimfire offerings. Or maybe it was it’s because they are simply much less eye-catching. The 455 Long, for example, with its 24.8” barrel, open sights and slender stock should feel classic, but comes across more as a throwback to a time when Brno was a name to conjure with, whilst the appeal of the Ultra Match is virtually invisible, lying as it does entirely in the internal profile of its match chamber and 12-groove barrel.

If you’re after a bolt-action but prefer modern over retro: how about the Ruger American Rimfire? It uses 10/22 magazines, has a bigger mag release, with an unusual synthetic stock that offers replaceable butt pad/comb section modules to offer a head position for open or optical sights. Plus it’s available as a 22” rifle or an 18” compact. It does however have more than a pinch of Savage about it! Other features include an Accutrigger-style trigger; a 60° bolt lift in a choice of .22LR, .22 WMR and .17 HMR chamberings, and a budget price.

Ruger’s 50th Anniversary 10/22 semi-auto shows a similar stock, but it also has a Picatinny rail with an integrated rear iron sight, a raised front post, and a threaded muzzle with an A2-style brake fitted. The rifle was the result of an open design competition run by Ruger, whose winner sensibly utilised many parts already in production. Unique, however, is the legend “50 Years - 1964 - 2014”, engraved into the brushed-stainless-steel-finish of the receiver. It’s refreshing to see a forward-looking, and affordably priced, anniversary gun.

Vortex is now well known in the UK distributed widely by Riflecraft and I will soon have some of the latest GEN 2 kit to check out, I have already had a peek at some from my test-bench and I was impressed to say the least.

Many brands were on show that sadly evade the UK market or certainly stagnate in the water of mass production but one pearl that has latterly risen to my attention is Bushnell. Alongside a huge variety of scopes, binos, spotters and rangefinders, they bombarded visitors to their stand with more trail-cams than London has CCTV. Minox were similar too!

Nightforce were showing the new SHV line that cater to hunters wanting less bulk, fewer options and lower price than the NXS benchmark in their range and also displayed updated turret system on the mythical B.E.A.S.T. scope that has yet to arrive here. The high mag 55x zoom target scope also has new turrets with larger numbers engraved for improved visibility to the shooter.

Zeiss perhaps showed the gem of the show, the new V8 range feature 36mm tubes for massive internal adjustability with premium glass yet at shorter overall length than would be expected. The x8 magnification range is extremely versatile but before you get too excited, they might not be coming to the UK for Patent reasons BUT, you never know. What is coming to the UK is the Conquest DL range. Replacing the standard Duralyt, the new scopes go back to plain black anodising but with new glass, external design features and cross range performance from 4x erector tubes with anything from a driven/dangerous game scope to a 3-12 optic for all seasons.

Leupold showed off their long awaited 7-42x56 scope that will cater for the serious target shooting disciplines. Reports from the World F-class championships in Raton last year were very positive from early test samples and I will be trying to get hold of one on test later this year when they will hopefully reach our shores. Minox have some serious Tactical looking ZA5i optics with the fashionable drum style fast access turrets, they were a little `normal` with simple Mil-Dot reticles though.

Swarovski are showing their new PBC (personalised ballistic turret) which will retrofit any one of their scopes that offers a BDC turret. You just give them your ballistic details bullet weight/type; velocity, zero range and increments etc and they do the rest. There is also a small butterfly shaped cam under the turret which when rotated clockwise/anticlockwise will entirely lock/unlock the turret and prevent accidental adjustment. Their other new thing was an iphone 5 adaptor for spotting scopes, binos and even riflescopes.

As well as their top end rangefinding binos with full internal atmospheric and ballistic computer, Leica have further updated their Geovid rangefinder which alongside HD glass, now incorporates an internal clinometer to allow it to show true ballistic range as well as line of sight distance which in some mountainous scenarios is very relevant. Look out for the 10x42 HD-R model; I really liked them for their intermediate functionality and complexity at a reasonable price.