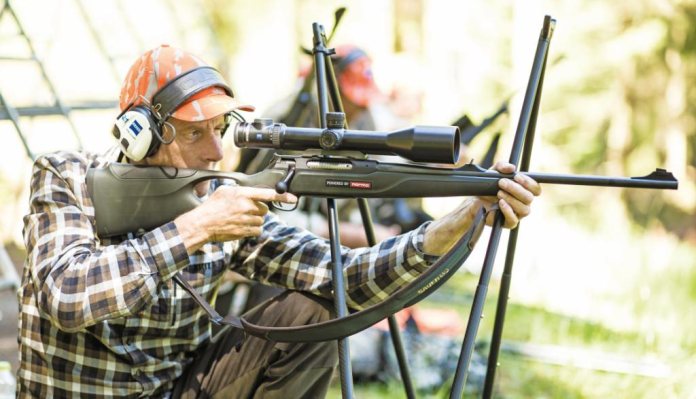 2015’s invite was my third to Ulfborg for the now annual Field shooting event where journalists from across Europe are invited to come along, eat, drink and shoot to make sure all the latest kit that the manufacturers bring along has their feedback and in some cases, seal of approval. This year 25 attendees arrived at Billund airport to be ferried along to the Ulfborg Skyttecenter for two days but first point of action was the usual ‘getting to know you’ meal where all the faces there could get to know one another.

Each year there are several familiar attendees, one of which has become me and several new faces to make up teams of five. The initial testing day on Saturday is followed by a competition element on Sunday, bragging rights for which are keenly sought. Introductions from our hosts Zeiss, Sauer, Norma, Blaser and Harkila laid out the equipment we would be issued with and using for the duration, the whole ‘this is your rifle’ speech. The new Zeiss V8 4.8-35x60 scope which was totally secret up to now was laid before us, Sauer 404 rifle in 308 Winchester, Norma TipStrike ammunition and various Blaser shotguns. The first novelty event was dressing up in Harkila’s Ultra High-Tec, Gore-Tex/Down filled jackets to spend ten minutes each inside a 20’ refrigerated shipping container, brought to Ulfborg specifically to try out this clothing for the super chilled weather of the Scandinavian North. Or it might just have been to keep the Schnapps we tasted inside chilled?

A few hours’ sleep and breakfast drifted us into Saturday morning where our ear defenders, rifles and ammunition were issued before spending an hour on the range to get comfortable with the kit and check zero. Harkila issued Alta backpacks and we stuffed these with spare clothing to pad out a good front rest/firing support for use throughout the weekend, and carry our sticks. Viper-Flex Quadpod Traveller shooting sticks are the three part carbon fibre version of the superb standard units I tested a few months ago in Shooting Sports. These split into three tubular sections allowing more compact storage for travelling, yet remain just as stable as their standard counterparts allowing serious long range potential from a standing rested position.

The Zeiss and Sauer crew had set up all the rifles with a standard ring for the scope’s elevation turret which with 5mm @100m clicks, only has half the amount of overall adjustment available that the 2.8-20x56 V8 with its 1cm clicks has. Although this does increase the precision of adjustment on a x35 magnification scope with a Mil-Dot reticule, one might assume it would be able to go out a little further! However, even with the ZeroStop disabled, we still had full functionality out to the 600m maximum shooting distance in Ulfborg. A second focal plane Mildot reticle also seemed a little odd as the Zeiss’ No. 60 is without doubt my favourite sporting reticle. Illumination was just in the centre and the controls, like other V8s were utterly blissful.

ASV+ turrets are as close to perfect as I can imagine on a sporting rifle, fast, secure and accurate as well as easy to perform primary setup on and set visual zero on the dial. This new 4.8-35x60 has a little more light entering the objective’s Lotutec-coated lens and has the fantastic illumination setup with a push button ON/OFF and rotary dial to set intensity above the ocular body. It remembers your chosen setting at shut down and of course, automatic cant and up/down angle extinguishes that crisp centre dot when the gun is not in use.

A certain amount of the overall elevation and windage travel (130-clicks/10.3 mils elevation. 85/8.5 mils windage) within the scope tube is required to zero the rifle. On sporting optics with systems like ASV+ where a ZeroStop is in place but no rotation indicator, you only have one complete rotation of the turret to play with from whatever zero distance you choose to the furthest you require. The 5 Mils on this V8 would for example take you from 100m zero to 840m on a 7mm Rem Mag which is way more than adequate, but when you move back toward more mundane calibres it seems a shame not to use 1cm clicks and get ten mils into one rotation, rather than disabling the zerostop to use two? Don’t get me wrong, this scope is utterly superb but to my mind, not just quite as perfect as its 2.8-20 ‘little’ brother

With a rail mount in place, the scope was very sleek in profile mounted atop the new Sauer 404 rifle. In 308 Winchester, this is a perfectly versatile all-rounder and in the Synchro’s synthetic thumbhole stock, very comfortable to shoot and well anchored in place with a rubberised butt pad. The adjustable cheekpiece is slender in profile so allows a good cheek weld without canting your head too far over, it has to be dropped fully to remove the bolt.

The bolt is the key departure of the new 404 which is otherwise visually very similar to the 202! A full de-cocker system is now incorporated with a straightforward thumb button/slider switch sited on the bolt shroud, forward for fire and back for safe. It was easy to use, fast, silent and very reassuring. There were many stages where four shots were required over the weekend so with a 3+1 loaded gun, the system was well used by the end of two days and I liked it.

The forend stud is a natty little tool incorporating a push button to slip it from its mortice and flips open to expose the single Allen key that adjusts all elements of the gun. A half turn in the recessed screw below the forend allows the front part of the stock to slip off and here you can access a slightly simplified barrel change setup. Also new is a 4-stage rotary dial to adjust the trigger pull weight from an ‘icy’ 500 grams to over 2lbs. It was nice to be able to adjust it so easily but although I regularly use a 1lb Jewel on all my own guns, I preferred stage II on the unit as I feel it gave a crisper feel. III & IV were equally predictable and for standard calibre hunting, I’d probably use stage III all the time. For those who like further personalisation, you can now also adjust the blade for reach and angle to perfect the fit. Although hidden by the one piece rail mount, the 404 has proprietary scope bases machined into the action so none of the bolt on Weaver fit or Apel units we may have sought in the past.

Norma’s 170gr .308 TipStrike ammunition is rated for medium game so equating well to what we may call larger deer in the UK, it runs at 2625 fps and proved accurate and dependable. However, Ulfborg is more about shooting than load development, so off we went for a day of scientific (yeah right) experimentation. We shot a lot of running targets with both 101 and 404 bolt action Sauers, as well as the semi auto 303 which is great fun! Saturday is about trying out the kit and getting lead pictures in your mind on both running stag and tusker for the following day’s competition. We also got to use the 1.1-8x30 V8 which was stunning. It’s obviously defined as a moving target/driven scope but with massive field of view, you can happily eke out a little more precision shot placement at 2/3x mag yet in the field, well at 8x it’s a great choice for longer shots prone or from a high seat. Truly a market leader, it’s great to see technology so well specified and this was a cracker, my shots on the driven deer felt far more assured this year. We took on some speed shooting challenges against reactive targets, press ups and running between courses of fire and a few novelty shots with .338 Lapua Magnum Blaser R8’s with GRS stocks. This gun is an absolute delight, a real gentleman’s ‘bopper’, I could have shot it all day.

The most important trial and one that is what makes Ulfborg the venue of choice for Zeiss particularly, is the multi distance range. Although not quite the maximum distance we can reach on the other lanes (600m), multiple targets everywhere from 50- 540 metres from a single firing point mean you can dial back and forth, shoot from any imaginable position and really work out how best to hold, control, support and shoot, as refining the settings on your turrets. Watching the wind is always helpful because Sunday is competition day and having an idea of how much windage to dial in for scoring shots is mandatory.

Well I will open with the simple line; I shot badly, nothing tragic but none of the magic from 2013 or 14 that won me prizes. I won’t attribute blame to any of the kit, it all worked perfectly but I wasn’t on my game. I wasn’t placing my shots quite perfectly and although I improvised well and shot the tricky shots from standing, kneeling and high seats well, I couldn’t get those perfect scores on the prone shots I used to take for granted. I knew exactly how this comp worked; I just failed admirably with a smile on my face, hey ho.

In a complete turnaround of my skillset, I shot the Blaser F3 shotgun stage really well this year, not usually my forte but Blaser and Rottweil (cartridges) had certainly given us a lot of ammo to ‘play’ with the day before, practising flushes I had thoroughly enjoyed. Steel shot is required here but it never seemed to make odds at what were in all honesty, NOT 45 yard edge on battues, twisting and looping enough to make you dizzy. Ulfborg is great fun and my travels have not yet found anywhere that can replicate the 35 firing ‘lanes’ (each a complete range in itself) and the brilliant event this is!

Arriving at a firing point and being instructed to put 4 -shots into a fox target using one leg of your shooting stick over 120 metres, and then immediately swapping to a 300 metre boar, prone with your rucksack for support, is a true test of improvised hunting shots and great fun. Targets like moose and huge tuskers are thrown in and you always get the opportunity to study them prior to shooting. Here you can clearly identify the exact high scoring zones, not always exactly where you might place your bullet when hunting either.

IMPROVISATION IS THE NAME OF THE GAME

We had shots from high seats where we were encouraged to use any of our carried accessories for the day to further stabilise or shooting position and it was great to see different shooters trying out various strategies. As always, we had the Sauer 202 Hatari in 458 Lott to place one brain and one heart shot into an Elephant silhouette.

Cracking fun, even if some found it a little bruising. The day ended with the medal ceremony and podium placings. It was great to see the diminutive Dr Nina Krueger from Hamburg, at 4’10” tall, walk away with the long range prize. She beat us all shooting standing from sticks, none of the prone malarkey us wussy chaps had chosen! Long may Ulfborg continue, the equipment presented is always absolutely premium and any rounds left un-shot after 2 days are almost hidden away in disgrace, as if to say we hadn’t been trying hard enough to melt the barrels Sauer and Blaser provided. A few days after my return I still had grains of the flour like Ulfborg sand in my trouser pockets and it was a reminder that none of the equipment missed a beat in this harsh, aggressive abrasive environment and that is a fact that Zeiss, Sauer and Blaser can be very well satisfied with as like a hire car, there is no faster gun than a loaner!