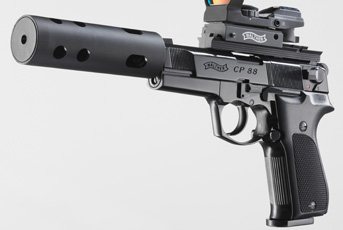 CO2 guns in general are low powered, which offers the advantages of being able to be used easily just about anywhere, with obvious regard to safety and common sense. They soon started appearing in airgun magazines. We at Shooting Sports reviewed the quality models that came our way. The Umarex/Walther CP88 imported by Brocock Ltd became very popular. Many then went onto subsequently buy more, particularly the Smith & Wesson revolver.

You could say the two main gun types where available and what I discovered from former handgunners now using CO2 was that although they miss the real thing, what was on offer still required all their skills and kept them sharp and competitive. However, they soon realised decent ‘courses of fire were required to make it interesting. Initially some small practical pistol or Triple P type of events were held at more open-minded clubs, especially for the fast firing, CO2 8-shot handguns.

These soon started to be regularly attended so GPP (Gas Powered Pistol) shooting competitions sprang up with various rules. You could also expect an Action Pistol event against the clock, so that’s the reason the fast fire attributes of such kit as the Anics Skif became popular and many others followed. Most air pistol competitions have simple rules based around safety and the wearing of camo is a no-no. If CO2-powered they must use the 12g CO2 capsule (Powerlet) and those that use the rotary 8-shot, removable magazines where the most popular.

CP88’s soon became CP99’s, Berettas, SIGs, Glocks, etc.; if there is a modern/real handgun you could guarantee a CO2-powered copy is available. Often the authenticity was uncanny. Accessories came into the equation, such as holsters, which are one of the main items you’ll need for an Action Pistol Shoot. Speedloaders are still popular, red dots, open sights, or pistol scopes dependent on the events allowing any handgun sighting aids to be used.

Many say the glory days of Triple P shooting, Action Pistol, Man V Man (a variant that used rules taken from a similar centrefire competition) are over. Sales and competitors say otherwise, as any gunshop will tell you! Though it did go quiet, diehards kept many competitions running, which shows it still has a place. However, all have to come to accept the CO2s for what they are. If you think of them as toys, because you liked real handguns - they’re definitely not for you.

If so I’d say try a single-shot, pellet-firing springer for plinking and the occasional informal get together. Alternatively the new authentic slide action types, most firing 6mm steel BB’s, semi-auto, look-a-likes with blow back actions.  These are fine if you just want garden gunning fun (metal BB’s aren’t allowed in the major competitions, due to the possibility of ricochets off metal targets).

However, a brief chat with a spokesman for the UKPSA revealed their views on the scenes changing disciplines of competition which I found interesting and highly believable. The GPP aspect of the sport from their viewpoint has declined, with long barrelled revolver and other disciplines filling the void. Back in 2005 was probably the peak for the GPP shoots and it’s plain to see, the buzz that surrounded the guns, kit and the competitions then. The Pheonix 2005 event at Bisley saw a UKPSA presence and they also ran a shoot which proved popular.

Real Is As Real Does

Already ASG pistols (Highland Outdoors) are extremely popular for their authenticity and fun factor. The Dan Wesson even uses individual dummy cartridge that holds the BB, which load into the 6-shot cylinder like a real D/A revolver. However, if you like to test your skill with shooting fast and accurately and the buzz you get from competitive shooting, then these pistols offer an alternative for plinkers and for the more serious to practice shooting technique less expensively.

Also, pistol shooters have cottoned on to Hunter Field Target (HFT) competitions, and overnight, Pistol HFT was born. Similar courses as HFT are laid out, but obviously using appropriate targets and reduced ranges – they are set at 25m maximum and closer and all are a minimum of 35mm in diameter. You can use any pistols from CO2 to PCP and recoiling: there are also categories for open sights, scoped and red dot.

Join the United Kingdom Practical Shooting Association (UKPSA) and you’ll find many doors open as they run competitions and other club events that includes CO2 practical. They have apparently been going on for some time. The first match was in November 1997 and since then has steadily grown in popularity. There’s even an E-mail postal shoot if you can’t get to other clubs…

So what is practical shooting? The shooter tackles competitive stages requiring varying round counts and different firing positions, against the clock. The appeal lies in the diversity of the courses of fire, which are different for every match. Targets vary in size, shape, position and material - metal, paper or frangible - from a variety of distances (usually from 3 to 60 yards).

Matches are open to all UKPSA members, for further details of them visit the members’ Bulletin Board/Forum- there is also a Calendar of events. Pistols of all types are on the increase, again mostly lookalikes of famous handguns but some already tricked out to suit certain other CO2 events. Holsters made by Price Western Leather, Escort Gun Leather, Brocock, Armex and other manufacturers with a vested interest in the sale of gassers and the like. Open sights were and are the most common. Brocock often give prizes and/or even have a presence there.

There are a number of divisions - Standard that incorporates open sights, holsters and magazines behind the hip. Open with optical sights, barrel weights and compensators and Open-Plus for the Anics CO2 variants with high capacity magazines as mentioned earlier, but there are many others that fit this discipline.

Magazines for the standard and open division were once limited to 10-shots, with revolvers at six and Open-Plus use high capacity magazines. Incidentally, if you are thinking of buying a gun for these events take note the safety catch must be used if fitted as mistakes can happen in the heat of a course of fire. Revolvers like the S&W do not feature a safety but as they are trigger cocking proper gun drills means the finger is never on the trigger until the gun is pointing at the target. So apply the safety and or engage the brain at all times, as any sort of gun is not a toy…

To compete in UKPSA competitions at one time you had to have done the Basic Practical Pistol Safety course, as there’s a lot of fire and movement and holster work! They certainly take safety seriously as it should be.

The latest thing is Iron plate Action Shooting (IPAS). Claimed to be the latest and ultimate action discipline, designed specifically for multi shot CO2 pistols. It’s based on speed and accuracy; however one is no good without the other!

IPAS is good for those wanting to shoot rapid fire pistol within limited space and targets that are easy to construct, set up and clear away. It also appeals to the physically disabled as there is no movement required other than to draw the pistol. It was started in 2000 as an alternative to the Steel Challenge after the handgun ban. Competitions involve several stages where five steel plates either 10? or 12? or 12”x18” and set out at varying ranges. Different but challenging layouts need to be hit and each sequence is timed.

Each stage is shot five times and the slowest discarded, the remaining four being your score. It’s fast, furious and fun. Check out their website for full details, but it’s 100% a magazine-fed event and only normal lead pellets are allowed for safety reasons!

Each course of fire consists of between two and five plates, (one of which will be a stop plate); competitors are started by a shot timer’s that will stop when the last shot has been fired. Interest and PR on the discipline is so high, there was actually a short course to try it at this year’s British Shooting Show.

As I was putting this piece to bed, I had a call from an organisation called the UBC (Umarex Boys Club.) They are well organised and do what certain other associations seem to have forgotten; keep it simple and fun. As latter groups can tend to over regulate on rules and equipment, which can put potential members off. So they do it there way and it seems to be working as they have a growing band of followers. Paddy Egan is competition organiser and pretty much seems to be a driving force helped by equally keen officials. I reckon they could shake the whole scene up big time, plus they’ve just scored sponsorship from Brocock.

After the handgun ban the only positive thing to come out of it was that the status of CO2 guns changed. Legally, they were allied with what we know as legal limit airguns, removing the need for an FAC to possess. This lead to a surge of interest and the guns came thick and fast from CO2 giants Umarex. They have the look and feel of the real thing and sales went through the roof, for various reasons.