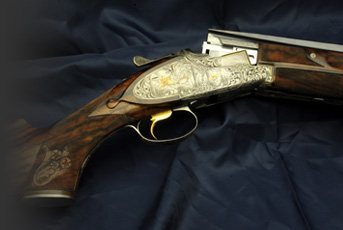 Hand made sporting guns present the pinnacle of our industry the world over, whether it’s an English Purdey, French Demas, Italian Famars or a Belgian Browning. Each is special and unique, as much if not more a work of art than a tool. No wonder then that shooters around the globe yearn to possess one!

Everyone knows a Browning gun when they see it; the 525 models seen on the shelves today are true descendants of the Browning Superposed B25, the last design of John Moses Browning back in 1922. It was designed initially to be the first over & under sporter that would be affordable to all, and it sold in great numbers. However as it was produced in Belgium the rising costs of production eventually meant that in its original form it proved too costly to sell to a mass market and now in a strange twist of fate the best superposed guns are only available via the Custom Shop in Herstal.

Belgium may seem an unlikely place for an American to produce guns but the connection between Herstal and Browning goes way back. It was in fact 1897 when the factory that sits along the banks of the Meuse River first started working with John Moses. It was here in the Custom shop that the last ever Auto 5 - arguably one of his greatest designs - was finished and is now proudly displayed. The city of Liege where Herstal is located has a great gun making tradition, their proof house was established in 1672 and it is the oldest still in operation in Europe.

The Herstal factory was also where the great man passed away in 1926, a heart attack taking him as he worked at his desk on his 61st visit. Suffice it to say then that Browning and Herstal share a common history as well as a future.

Entering the Custom Shop is like stepping back in time. Instead of banks of CNC machines and crates of pre-manufactured parts awaiting assembly there are a few rows of benches at which the artisans of Herstal ply their craft.  Off the main factory floor there are some small rooms containing the few parts of machinery that the operation does need, but you are left under no illusion that it’s the human element that is king.

The barrels come into the factory as individual solid bars that have been repeatedly hot-forged for strength and pre-fitted with either a top or bottom demibloc. These are then silver soldered together before the side and top ribs are added. Custom Shop barrels are renowned for their quality in appearance as well as the patterns they throw. This is due to the meticulous attention paid during the polishing process, being ground to the finest of finishes using lead lap and emery dust. Once the chambers are bored and the choke reamed then they are struck by a ‘garnisseur’ whose trained eye can detect the slightest imperfection on the exterior whilst the interior bores are given equal attention.

Inside the workshop the distinctive smells of gun making pervade the air; walnut, stock oil and the metallic tang of worked components. But there is one that is rarely smelt these days, the odour of lamp blacking the action. Using the smoke from an oil lamp the gunsmith covers the demibloc face with a layer of smoke, then joins it to the action and opens it. If there are tell tale marks where friction has taken place between the two parts then the process of filing and testing continues until the perfect join is established. Time consuming but necessary in an environment where only perfection will do.

Custom made guns either stand or fall by the quality of the woodwork and great care is taken to ensure that the walnut used fits the customer’s requirements. Stocks are primarily taken from the root of the tree with differing patterns available from trees grown in different parts of the world. Walnut from colder climbs grows more slowly, consequently (as with the trunk of the tree) the rings of growth are smaller and the rings more closely packed. In warmer areas they grow faster, spreading the lines further apart. The Custom shop has walnut from several different areas to ensure the most discerning of customers gets just what they want.

Customers are welcome to visit the factory and pick out the wood that they require before it is trimmed, shaped and filed to create the stock and distinctive three piece forend for which the high grade B25’s are instantly recognisable. Once shaped the furniture is joined to the action using a similar method to lamp blacking though this uses red dye rather than oil smoke to ensure a perfect fit. The final shape is painstakingly crafted to fit the customer’s dimensions, with stage after stage of polishing, grain filling and linseed oiling. Asked how many times the stocks are oiled before being finished one of the workers simply answered ‘each piece is different, we just keep oiling it until it no longer absorbs the oil, we don’t bother to count’. The lustrous finish of a Custom Shop stock is designed to be easy on the eye not to keep the company accountants happy.

Once forged the actions are hand filed, the fences that make up the distinctive curve of the action slowly crafted by hand, where one slip of the chisel could turn them into metal scrap - though this is a very rare occurrence in an environment where only the best are allowed to practise their craft. Each internal part is hand-polished to a mirror finish while the deep sides of the Browning action are hand-sanded with up to seven grades of emery paper to ensure that the engraver is presented with the perfect canvas for their work.

History is never far away from those working at Herstal, from the picture of John Moses in the showroom to the town’s gun making heritage the connections are clear. The B25 Superposed may have been in production for 83 years but the line continues to evolve and this is best seen in the changing patterns of engraving. For example the B2G pattern was designed by Master Engraver Louis Vranken in 1967, whilst others have been adopted in the 70’s and 80’s.

Of course customers can specify their own design if they wish, whilst at the moment the current team of engravers are working on a special project as Kevin Ewings of the Custom Shop explains “I have given each engraver an action, on which they can set their creative impulses free, these will be in effect be the calling cards of the engravers and once finished will be available as truly unique guns. It is important to give them the chance to put across their own personality in their work”

For those buying a gun from one of the standard (standard is a word that hardly seems suitable) patterns, each one is identifiable by the engravers signature incorporated somewhere in the midst of their creation.

Custom shop barrels are resplendent in their ‘crow black’ finish, one that is not easy to come by. After polishing they are blued by oxidation, normally thought to be the No.1 enemy of a gun barrel in everyday use, but this controlled process sees a minimum of 6 layers of ‘acid liqor’ being applied. Between each layer they are placed in a hot steam cabinet which encourages rusting, they are then brushed clean and the process repeated until the desired finish is reached.

Finally each of these hand crafted parts are bought together as a symphony reaching its crescendo. Quality control on a product of such quality and cost is stringent, though due to the patience taken during construction there is often little remedial work required before the gun is shipped to its new owner.

There are many superlatives used when talking about custom guns, and each manufacturer gives different nuances to their product. Perazzi for example has a facility that in appearance and atmosphere could be likened to a modern race car factory. The Custom Shop on the other hand appears to be more like something frozen in time in the 1950’s. Neither view is right or wrong, as both produce sporting guns of the highest quality for those who seek perfection.

As for the Custom Shop’s product there is no doubt that it is as popular as ever, those signing on the dotted line today are unlikely to see their guns within a year or even longer so full are the order books. Europe is a strong market for the marque, primarily in Game Guns. Yet there’s more interest from clay shooters with more orders being placed by those looking for the sporter of their dreams.

Of course such perfection doesn’t come cheap, expect to pay from around £14,000 for a Custom Shop creation and as for the upper price band well, depending on what you want the sky is pretty much the limit. So what do you get for that? For a start its more than just a gun, it is a work of art that has taken countless hours of painstaking work to create. It is the sum of its parts and the personalities of those who have lovingly created it. Does it feel different to an off the shelf gun?

If you ask the question then you have never held one - the balance and feel are just perfect. It feels more than that though, I might pick up a gun off the rack in a store and think; yes, I could shoot with that. But with the Custom Shop guns you know you can and there is no doubt! In your shoulder it feels like an old friend, as you swing it you feel as if you and the gun are a team working together. As for the 30” 20 bore that caught my eye in the showroom, well for a while I think that Kevin and his team were worried I might need to be sedated before I would let go of it.

John Moses Browning arguably set the standard for the production of modern Sporting firearms in terms of reliability, design innovation and cost effectiveness. It is fitting then that his spirit lives on amongst the corridors of Herstal setting the standards all over again but this time for delivering a blend of human efforts and true manufacturing perfection into a brand that looks set to thrive well into the future.