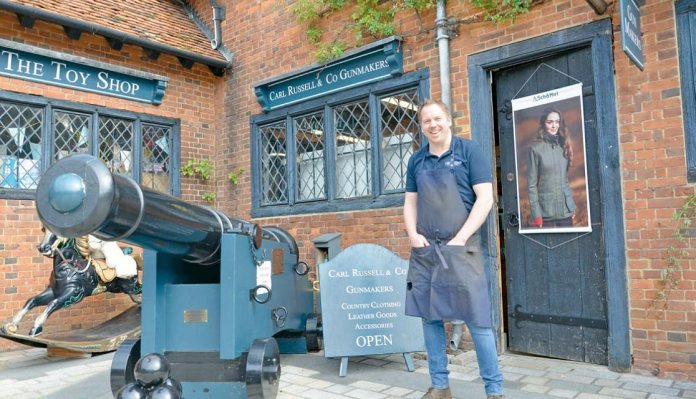 Fine English Shotgun production is the bringing together of a handful of craftsmen, each specialising in a particular aspect of the finished item. Carl Russell has undertaken just such a venture, and with his first gun just completed to order, he’s understandably proud.

Carl started working in the gun trade at just 14-years old at Broomhills Shooting Ground, based in Markyate, Hertfordshireworking at weekends and during the school holidays. He then served an apprenticeship at Ladbrooke and Langton Gunsmiths, in Radlett, (Herts) at 18-years old, and was there for 7-years. His experience was now in demand, and he began working back at Broomhills in the workshop, which was actually Atkin, Grant and Lang (three English gunmakers who amalgamated back in the 60s). Just short of 11-years’ service here, working partly on new guns, but mainly repairs and restorations to older models, gave him an invaluable insight into the whole world of gun preparation, and a firm appreciation of fine English Shotguns was the inevitable result.

Carl now runs a business under his own name, Carl Russell & Co. (Gunmakers), which includes a gunshop and workshop; and as locations go, they don’t get much more prestigious than the Stable Yard, at Hatfield Park, Hatfield House, in Hertfordshire. The business has now been running from the current Hatfield site since April 2014, and stocks a good selection of quality airguns across the board, as well as all the usual accessories, maintenance products, clothing, and shooting paraphernalia, that you expect to find in an up-market gunshop.

Yet with Carl’s passion for fine English shotguns, the driving force behind the venture, it’s hardly surprising that this is where his speciality lies. The premises carry a good selection of second hand and vintage models, but also a superb selection of specialist fitted cases to match. Many cases are second hand, but are high-quality items, perfectly suited to complement top grade products from the likes of Purdey, Boss, and Holland & Holland; and with a variety of second hand guns always in stock, the shop is an exciting place for any sporting enthusiast. New guns are stocked too, from Beretta, Browning, Caesar Guerini, Cogswell & Harrison and others, and with that fully appointed workshop on site, all manner of technical repairs, modifications, metal finishes, and stock finishing, are undertaken.

Building a bespoke English shotgun was always something Carl wanted to do, and to realise his dream has been a special experience. Made to order, to the customer’s detailed requirements, the first ‘Carl Russell’ branded English Shotgun, has now been created, and it really is a delicious piece of traditional engineering and craftsmanship.

It’s a 12-gauge overand- under, based on the classic Purdey design; itself loosely based on a James Woodward specification. That spec includes 30-inch Superior Proofed barrels, 2¾-inch (70mm) chambers, six chokes ¼ and ½, and an overall weight of 8lbs. We are talking top-end quality here, and with an asking price of £65,000 plus VAT, it’s a serious investment in anyone’s book. The order process from start to finish is around 18-months, and involves seven or eight individual craftsmen, all specialists in their own field. Barrel Maker, Stock Maker, Actioner, Hardener, Engraver, Finisher, Case Maker. All areas demand high levels of skill – with each requiring a minimum five-years’ apprenticeship to be served.

All the work involved for this special shotgun is carried out in England, to the highest standard.

First, the top-quality action kit is bought in, specified by the customer, and manufactured to Carl’s approval, by an English maker. The first gun is an over and under design, but customer requirements will be discussed and agreed upon.

This action is then given to the barrel maker, to manufacture the barrels. Again, this is a supplier based in England, recognised for exemplary workmanship. The action and barrels are then fitted together.

The action and barrels are then sent to the London Proof House for pressure testing. Minimal work is carried out before this stage, in case of any problem encountered. Standard procedure, at this stage, although testing should be a formality.

Next we move to the woodwork, and here, the customer first chooses their stock blank. Turkish Walnut is being used for the first gun, and this has become very popular for its obvious availability, fine figuring, and durability for the job.

Any major project such as this requires the customer to come in for a general fitting session, where all dimensions and particular requirements are noted and taken into account. Details are then sent to the specialist Stockmaker, to be incorporated into the design.

Once the stock is back from the Stockmaker, the gun is then sent to the Casemaker, so the fitted case can be finely tailored to the correct shape and dimensions.

The next stage is for the gun to be prepared for polishing and engraving. The action and parts are then sent to the Engraver, which normally takes around two-months. The customer agrees on the particular patterns to be used, and can choose from a selection, or have bespoke designs added. The first gun to be produced by Carl Russell carries a picture of the customer’s dog for example. Large acanthus scrolling can be incorporated, small scroll, or a combination of the various styles. The customer can specify or be expertly guided through the options.

Once the action is back from the Engraver, it is time for the relevant metal components to be cyanide hardened, which is actually a cyanide gas process.

The next stage is for everything to be assembled, for a basic test to see that everything functions correctly and clicks as it should do. Everything is also checked for flush fitting and seals where necessary.

The gun is then taken apart, and then given the final finishing process. All internals are polished, which is all done in-house, and then a slow controlled rust process is used, to treat the metalwork.

All the components are finally assembled and fine stock finishing is all done in-house.

A specialist process indeed, and having now met Carl, his passion and enthusiasm for the whole operation, and pride in his achievement, is there for all to see. For more information on Carl Russell English Shotguns, or the business in general, visit the website at www.carlrussellandco.com.