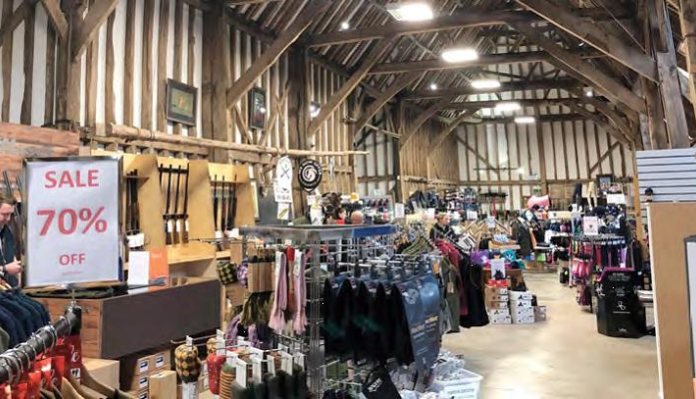 A few months ago, I was researching SMLE .303 service rifles (as you do) and I came across a couple of examples for sale on the website of a Suffolk gunshop. I thought the company name was rather neat but didn’t think more about it. Fast forward a couple of weeks and my family and I were spending time in Bury St. Edmunds, in, you guessed it, Suffolk. Well, it would have been remiss of me to not pay a visit and we soon found ourselves in the carpark of Forelock and Load! They are located just off the A14 between Newmarket and Bury St Edmunds by the way.

To say that their premises is impressive is an understatement, as the building that houses the business is an enormous 16th Century oak threshing barn. It turns out that it was completely renovated and re-roofed before the shop opened five-years ago and I’ve never seen a gunshop quite like it.

The inside is just as spectacular as the outside, with exposed beams supporting the roof and the whole place is light and airy with lots of stock! The far end (that didn’t really interest me, to be fair) is packed with equestrian gear – that’s the ‘Forelock’ part of the name but the end where the entrance is, did – the ‘Load’ end. There were racks of new and second-hand airguns, rimfire and fullbore rifles, as well as the same as far as shotguns are concerned. New Blaser and Lincoln shotguns are stocked and last year Forelock and Load sold more Lincolns that anyone in the UK. One really nice option is that potential customers can try before they buy on land nearby, which is a fantastic service and is much better than simply standing in a gunshop. Rifles are also available to test and this is a real feather in the shop’s cap. They recently had an airgun open day, where people got the chance to try BSA R-10 PCPs and there was even an egg set out at 100-yards, as a rather challenging target!

The shop has clothing, gunbags, lamps, accessories and optics, with a good selection of jackets etc. from Jack Pyke and boots from Lowa, Ariat, Meindl and Seeland. The shop always has a decent selection of shotgun cartridges from companies such as Fiocchi, Express and Hull and rifle ammo from Hornady, Remington, RWS, Winchester, CCI, PPU and Norma.

Forelock and Load is the brainchild of Nick Johnston and his sister Kirstie and it is situated on the family farm (there were alpacas, sheep and a donkey outside when I visited) and it’s been really successful since it opened at the end of 2013. What I really like about the place, apart from of the stock of course, is Nick’s positive, ‘can do’ attitude and he really wants to ensure that new people take up shooting in all its forms and the simulated game days he runs are an example of how he is encouraging new blood. The shop comes highly recommended and I’ll certainly pay a visit next time I’m in the area and they also do great food! They are open seven-days a week.