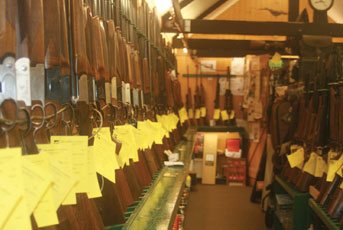 I think it is safe to say that there has been - and will continue to be - a huge amount of interest in the Saddlery & Gunroom’s Hushpower sound moderated shotguns, which have been on the market since 1998 when the brand was taken over. I am told that back then there was only one model available in three calibres.  Since then they have expanded their range and now produce four makes of moderated guns which include Mossberg, Investarm, Baikal and Yildiz.

The Mossberg range consists of pump action shotguns available in 12g, 20g and .410.  The Investarm over and under is the basis for a double-barrelled Hushpower available in 20g.  Finally the Baikal and Yildiz are the two models used as the base for single barrelled .410 Hushpower shotguns.  It also transpires that if you have a single barrelled shotgun already and would like a detachable moderator the Saddlery & Gunroom can supply one of these too.  I personally have been very interested in the Hushpower products and have found myself curious… just how quiet can they be?

Having spent some time looking at some fairly inconsistent reviews in magazines and online, I felt it was time to find out for myself.  This prompted me to make a visit and find out not just about Hushpower, but the shop and the people involved too.

The shop is located in Kent and is just off the M25 near Biggin Hill.  It was easy to find with plenty of space to park.  As soon as you enter the shop you are faced with the saddlery, which was opened in the early seventies.  The proprietor, Howard, is a master saddler with over 35 years of experience.  It was not long before the business was expanded to include a gunroom in the late seventies.

I was greeted by the main man, Jonathan Stone, and we quickly started discussing everything that they do.  It was soon apparent as to how busy they are as a shop with a strong regular customer base, which I consider a promising sign of a good shop with no shortage of staff ready to help in the gunroom or the saddlery.

In the Gunroom there was a fairly extensive array of shotguns, including (to name just a few) Berettas, Benellis, a selection of Mossberg pump action shotguns and single barrelled Baikal .410’s. This was complimented by a good selection of spring and pre-charged air rifles and pistols. It was not a surprise to find out that the best seller for Jonathan is the Weihrauch HW100 series of rifles, and it was also good to know that if they have not got what you want then they will get it in for you, in fact while I was there a customer phoned in for an Air Arms TX200 and it was ordered there and then.

If it is firearms that you are after then look no further, as the selection available included CZ rifles and the Browning X-Bolt along with an extensive range of Mossberg rifles.  At the time there were lever action rifles in 30-30 Win, bolt action rifles in .22LR, .17 HMR, .243 and semi auto rifles including a Mossberg Tactical .22LR Autoloader.  I was also told that a few MVP Varmint rifles in .223 were on their way in as well, so keep an eye out for those.  There were also a full range of accessories to meet the customer’s requirements and plenty of advice on top to help you out.

Try Before You Buy

I found out about a very important facility that is offered to the customer as well.  Want to find out if the Hushpower will meet your noise reducing expectations?  Well they are able to show you, as they have a clay ground at the back of the premises along with a demonstration area!  This to me is a fantastic opportunity for any prospective buyer as there are not many shops around that offer this.  So if you are interested then give them a ring and make use of this great facility!

We Can Fix It!

After venturing into the depths of the building, I was shown the workshops and all the equipment used by the gunsmiths.  These facilities being a useful feature to have in your local gun shop, especially if they are good at it!  It turns out that there is quite the team working at the Saddlery and Gunroom as they have two full time gunsmiths and one part time.  I was interested to hear that this team included Philip Pyefinch who joined the team in 2012 from Frank Dyke Ltd (the former UK Anschutz agent for over 70 years – although the brand is now with RUAG Ammotech).  Phillip has been to the Anschutz factory on several occasions for specialist training on their rifles and air rifles, so plenty of experience there.

The list of services that they are able to offer customers is extensive, with a few examples being; a service, adjusting trigger pulls, stock fitting, etc., and if you fancy it they will also carry out the work required to convert your shotgun into a Hushpower!

If it is an air rifle then they can chronograph it, zero it, service it and refill your pre-charged for you. They really do everything here.

Was I impressed? Well yes, enough to purchase a .410 Baikal Hushpower, so expect to see my view on this gun in an upcoming issue of GunMart.  If you are a fan of tactical pump actions then keep your eyes peeled for a long term report on the Mossberg 590 Persuader.

The Saddlery and Gunroom is located at 368 Main Road, Westerham Hill, Westerham, Kent TN16 2HN - about a mile from Biggin Hill, opposite the Aperfield Inn, where you can park. Full directions are available on their website

The shop is open seven days a week (9.30am - 5.30pm Monday – Saturday and 10.00am – 4pm on Sundays and Bank Holidays) and has an excellent website which can be found at saddleryandgunroom.co.uk where you will be able to find out about the latest products they have to offer and also the prices for the various gunsmithing jobs. Alternatively you can give them a call on 01959 573089. GM