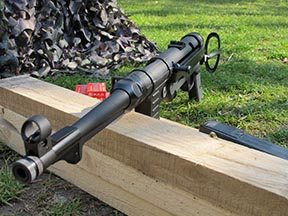 Never heard of them?  Well apparently some of our readers hadn’t, and neither had we until quite recently. So we have asked expert John Humbles of PlugFireCapGunsUK Ltd to give us a run down on these guns, their ownership and uses.

For me it all started many years ago as I am sure it did for many readers with a few cap guns bought with pocket money as a young boy. From there the fascination with shooting and firearms grew over the years into an enjoyable hobby and in October 2009 I formed
PlugFireCapGunsUK Ltd. to fill a hole that had developed in the market since the Violent Crime Reduction Act (VCRA) was introduced. Since the VCRA the number of suppliers of quality replica firearms decreased and with the price of deactivated firearms soaring we felt an alternative was needed.

Over the last 10 years as part of my work I travelled many times to Japan, and it was there that I was re-introduced (I remembered seeing them for sale in the UK in the early 80’s) to Plug Fire Cap Guns.

The First Question Many People Ask Is “what Are Plug Fire Cap Guns?”

Plug fire cap (PFC) ‘modelguns’ were designed to comply with strict Japanese gun laws. The full metal models are made from zinc/alloy metal and more modern models are made from special heavyweight plastic resins. They are specifically designed to be totally impossible to convert into real firearms. With the VCRA now in place PFC replicas perfectly fill the gap between airsoft and de-acts, and are ideal for re-enactors, collections, film, TV and theatre productions.

So plug fire cap guns provide an alternative cost effective way of owning a safe but very realistic model of your favourite firearm with the added benefit that they do a lot more!

Plug fire modelguns use a small cap and a clever cartridge mechanism to produce a very realistic simulation of a real firearm including noise, smoke, sparks and action cycling (blowback and cartridge ejection). They come in all the standard firearm forms, single and double action revolvers, semi-automatic and fully automatic pistols and rifles. PFC models operate and are strippable exactly as the real items, without actually firing a projectile. Each model takes the appropriate calibre cartridges adding to the realism.

It’s true that plug fire guns produce a much smaller “bang” than blank firers, but this is in general seen as a major advantage to our customers as it means they are more “usable” in the sense that they can be used at home for practice without fear of causing disturbance to neighbours. We have also had good feedback from theatre/stage production companies who in the past have found blank firers just too loud for their performances. Film companies have also commented that actors find the models less intimidating to use, and of course the inherent dangers of blank firers is avoided. The use in film nowadays of post production techniques to add bang / flash means that plug firing models with full blowback, ejecting shells provided a perfect alternative to other models such as airsoft/blank firers.

The name “modelgun” originated from the fact that the models were (and some still are) originally available as self build models, indeed PlugFireCapGunsUK recommend this as an excellent way of discovering the real way in which the models and their “real” counterparts work, as the beauty of these models is that they mimic perfectly the real internals of firearms.

One favourite modelgun kit - very popular in the UK with Vietnam re-enactors - is the Marushin Colt XM177E2 Commando. The fully functional metal 1:1 scale blowback self assembly model of the U.S. Army AR15 based XM177E2 containing over 150 precision parts, is the same size and operates just as the original - firing 5.56mm plug fire cartridges. This model is approved by Colt and as such it has all the correct Colt AR15 markings. The only ABS parts are the stock, hand guard and flash hider. The rest is all metal, zinc and steel. It is a semi/fully automatic firing, front venting model with a magazine capacity of 20 rounds. It comes boxed with 5 reusable cartridges (each cartridge uses two caps 1x5mm and 1x7mm), build instructions (no gluing, assembles as the real item!) and reloading tool. Extra cartridges and mags are available. Weight un-loaded is 2.3kg. Very realistic noise, smoke and shell ejection - great for re-enactors or filming.

The range and type of models available suit many applications, for instance one of the better know models in the UK is the Model Gun Corporation (MGC) MP40; this model has become a favourite with re-enactors in the UK due to its extremely realistic build. De-acts are fine, but the PFC model has all the correct moving parts and can be field stripped just as per the original.

The Marushin all metal Uzi is also virtually indistinguishable from the “real steel” having all the correct Israeli Military Industries markings. This model Uzi has full, working 3 way selective fire switch (semi, full auto and safe), it weighs 3.5kg the same as the real firearm and operates exactly as the real version using 9mm plug fire cartridges to blowback, cycle and eject spent shells.

We also supply western fans, as we stock pre-1870 VCR exempt models from Colts, Colt Walkers, Dragoons and Derringers to Winchester rifles.  Western fans have had very little choice of models since the introduction of the VCRA and have responded very positively to the Plug Fire option.

Many of the higher quality models are manufactured in small limited runs, and much of our business is supplying and sourcing one-offs for specialist applications. Recently we supplied a very beautiful Springfield 1903A3 to a WWII re-enactor who already owned a 1903A3 deactivated gun, but wanted something that looked just as real, but for close up static displays could also demonstrate the ammunition cycling and the real operation of the rifle, including a full strip down. The Springfield supplied was made by Craft Apple Works (CAW) in Japan which produces some of the best quality plug fire models available. The customer was delighted with his purchase and we have received many enquires since, as other re-enactors who have seen the model see the potential of plug firers.

The outlook for replica guns since the introduction of the VCRA is not as bleak as some people thought it might be. Re-enactment groups and airsoft clubs have seen a huge rise in membership, and the number of people taking an interest in firearms is now growing steadily. PlugFireCapGunsUK have already supplied customers ranging from MOD personnel (for training), Theatres, Film and TV companies to re-enactment groups and airsoft skirmishers wishing to add a new dimension to their hobby.

We have responded to many requests from our customers to expand into selling traditional 8/9mm blank firing models in addition to our current range, and to begin manufacturing 9mm Plug fire cartridges to use in traditional 9mm /.38 rimmed blank firing guns such as the Pietta range, as many customers find “normal” blank cartridges just too loud.

Customer service is everything these days and as enthusiasts ourselves we are only too happy to help with customers requirements where possible. We will carry out repair work and servicing on any models, and indeed one of the nicest thing for us has been helping people get models that have been lying around broken or with missing cartridges etc. working again and back in action!

The attraction of a plug fire modelgun is 100% realism. Blank firers are limited in the range of models, airsoft models are fine but nothing like a real firearm, and de-acts are now butchered in terms of working actions. With Plug fire guns as far as components and function go, they may not shoot projectiles but if you want to field strip and reassemble, simulate firing and want realistic safe props then look no further.

PlugFireCapGunsUK can be contacted on 01353 722541 or visit the website at www.plugfirecapgunsuk.com to find out more. Also check out the independent hobbyist website “The MP40’s Modelgun Forum” found at www.mp40modelguns.forumotion.net