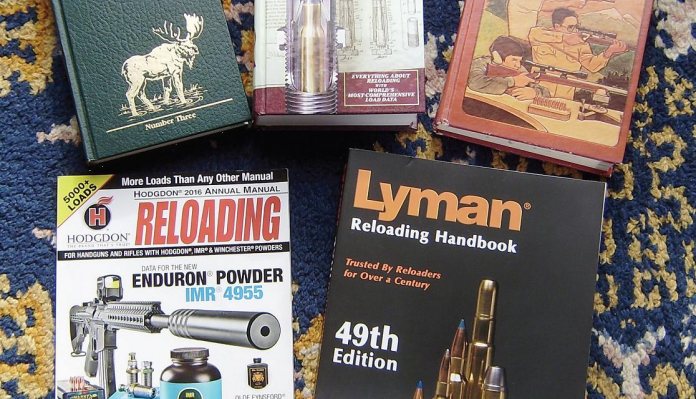 There can be few of us who do not own at least one loading manual or use at least one source online. Most of us probably access many more than that, but how do we know if it is accurate or best suited to our needs? Let me be clear, I’m not for one moment suggesting that any of the information is intentionally wrong, misleading or dangerous; just that from one source to another it can vary to a surprising degree. So saying, internet data from forums and unknown scribes should be treated with caution. The safest bet is to always corroborate this with that from a second independent source.

To illustrate the differences and similarities between manuals, we’ll take a look at the way they treat the same sample calibres in half a dozen different publications. To cover the spectrum, I’ve used 308 Win, 223 Rem and 22 Hornet. Rationalising the data has required a degree of compromise, as not all of the selected propellants and projectiles are covered by all the manuals, but enough information remains to make the results valid. As a reference point we need to factor in the quoted pressures, where specified, and compare them with SAAMI/CIP figures. The max load data is drawn from Speer, Sierra, Lyman, Nosler, Lee and Hodgdon/ IMR. The bullets and propellants have been selected to give the most representative spread of weights, velocity, propellant brand and relative burning rate.

LEARNING ON THE MOVE

Whilst extracting this data, a number of anomalies and interesting coincidences appeared. The Lee manual seems to lift a lot, if not all of its information from the publications of the major powder and bullet brands, and why not? Harder to understand was the fact that the brand new Hodgdon/ IMR 2016 Annual Manual still quotes data for their dropped Hodgdon H4227, as well as for their extant IMR 4227. More current is the presence in the same document for their disappearing Varget. Its replacement, built from technically more advanced ingredients is IMR4166, one of three propellants in their new Enduron range already in a store near you. The others being IMR 4451 and IMR 7977. All are small kernel extruded designs that include the copper fouling eliminator (CFE) first seen in their CFE223.

The manuals quote details of the barrel employed, whether a rifle or a test receiver and the length, although some are less specific. Sierra, Speer, and Hornady actually name the make and model of the rifle for many of their data, whilst Lyman and Nosler usually specify details of the test receiver. Hodgdon/IMR generously limit their details to just the length of the barrel – presumably a test receiver! Only Hodgdon/IMR and Lee quote pressures for all or most of their data, whilst Lyman pressure data is patchy.

Most indicate whether a load is compressed, whilst Nosler go a stage further, usefully quoting the load density. Lyman seem to have a slight aversion to ATK/Alliant – amongst the popular rifle cartridges the data for their range of powders is surprisingly limited. As a caveat, they do quote more expansively for Alliant pistol and fast rifle products. The make of brass employed is also important, since there are notable variations in capacity between the brands. As a rule of thumb I assume that, amongst the popular commercial makers, Winchester will have the greatest capacity, with Norma often at the other end of the spectrum. With the older brass, originally designed for use with black powder, variations in capacity are not much of an issue. However, some modern iterations, especially those that have evolved from modern wildcats and with loading densities approaching or exceeding 100%, capacity is very much an issue – as it can impact upon pressure.

Checking my records, I could only find a couple of my loads that actually came close to matching the published figures from any of the manuals. I generally avoid max loads unless the work is experimental, so some interpolation was necessary. A few were faster, but on average my recorded velocities were as much as 8% less. This then illustrates an important issue, compliance with the Law! Simply assembling a recipe quoted in a manual for use on game could leave you with egg on your face; if the actual velocity of your load is below that quoted you may not be achieving the legal minimum energy. The same consideration must be applied to factory ammo – if the quoted velocity on the box is only marginally higher than the legal minimum for the given bullet weight, a chrono test using your rifle is essential. For a fragile old fart like me the risk is real, as I always endeavour to produce the most accurate load with the least recoil, thereby saving my shoulder, my rifles and my wallet.

SAAMI do not publish MAP (Maximum Average Pressure) for every bullet weight in every calibre, so it is not always possible to make a meaningful comparison with the data in the manuals. With the .22 Hornet SAAMI quote a CUP of 43,000 for the 45-grain bullet. Hodgdon/IMR get bang on that limit with their 2503 fps, 10.4-grains of H110 in a Winchester case. Transfer that load to a thicker walled, lower capacity brand and you’ll possibly be over the top. If the load is quoted as a compressed charge, remember to use a funnel with a drop tube or you may have trouble seating the bullet to the desired depth.

Do not assume that Hodgdon and IMR powders with the same number have the same performance. Take another look at our .22 Hornet, 45-grain example. Their new manual quotes a MAX compressed charge of 10.5-grains of IMR 4198, giving 2010 fps and a pressure of 20,100 CUP, whilst 11.5-grains of Hodgdon H4198 is a MAX compressed charge giving 2400 fps and a pressure of 32,000 CUP. The IMR is obviously a much bulkier powder and, by interpolation, slightly less potent. Remember that primer performance can influence the quality of deflagration and therefore the resulting pressure and velocity.

Making sense of claimed velocity for a given recipe can be aided by taking the barrel length into account. Whilst the relationship between the propellant burn rate, bullet weight, forcement pressure and barrel length will create subtle variables in a specific rifle, SAAMI produce a ballpark guide for easy calculation. A copy is pictured. The conclusion; never use a single source of date, especially if you are loading a calibre for the first time or are working at the upper limits of pressure. Make comparisons and do the maths.