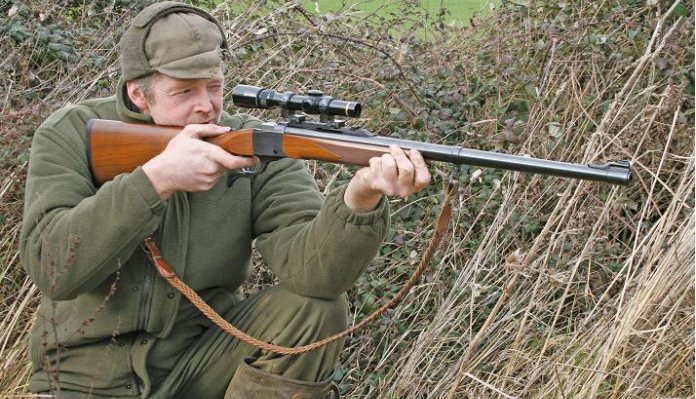 With ever more sports persons venturing to Africa to take part in the safari experience, the interest in old, classic, English-styled rifles, and the cartridges shot in them, has been rekindled. Great old soldiers like the .375 H&H, 416 Rigby, .450/400 Nitro, to name a few, are having a bit of resurgence of late.

These may only really be suitable for use on the dark continent but cartridges like the 300 H & H still have that African flavour but are much more practical for use against game in this country also, making them a dual purpose calibre. Rifle makers too are now offering classic calibres as part of their range of rifles, such as the CZ Safari range, of which I had a 300 H&H to play with. If you don’t know, H&H standard for Holland & Holland!

These rifles have a single set trigger unit, which offers two pull weights. The first is standard and as the action is cycled the mechanism is automatically set up. If you want it lighter (not really sure why on a big/ dangerous game gun) you just push the blade forward, where you will hear a click. The trigger is now set with a significantly reduced pull weight. A light trigger is to be appreciated at times, but in the heat of the moment the lighter release can be an accident just waiting to happen too; be aware!

Back to the plot! You get a choice of gloss or matte-finished metal work, high grade fancy American walnut stocks, with a straight comb and glass bedded to the action and the barrel has a forward-mounted barrel band with sling swivel mount.

There are various features within the Safari range that can be specified when ordering, especially the cartridge choice that ranges from .270 to 505 Gibbs in the Express or Classic rifle form. In fact, some really old English cartridges such as the 404 Jeffery, .450 Rigby, and .425 Westley Richards are there for the purists, while the .375 Ruger and .338 Win Mag are more for the conventional shooter.

I really like the 300 H&H cartridge; it has that old world charm of a true British classic. Very old fashioned in looks, with its extra long case and shallow angled shoulders, it also has a belted magnum head design. This feature has lost favour of late, gunsmiths preferring to headspace off the shoulders and not the belt that can lead to case stretching. A good example of this is the old and very much Africa, entry level calibre, belted 375 H&H compared to the modern 375 Ruger, the latter being more powerful and a deal better behaved in the shoulder.

The 300 was first introduced after WW1 in 1925 by Holland & Holland gunmakers of London and called the Holland’s Super 30 cartridge, being formed from the original .375 H&H case and is probably the most wildcatted round ever. Last century, it formed cartridge lines like the Weatherby magnum range. It needs a magnum action ideally, as a loaded round at 3.60” will not properly feed through a 30-06 length action and the bolt face need to accommodate the magnum case head of 0.532”.

With a powder capacity of 85-grains, the big 30 is a capable of velocities higher than the 30-06 but not quite as good as that of the 300 Win Mag or 300 Weatherby magnum. But due to its slender form it feeds beautifully through a magazine and is inherently accurate, with a wide range of bullet weights, including lighter than normal types. I like the slow angled 8° and 30 minute shoulder angle and body taper of 0.054”.

Because the Holland’s case is longer, the heavier bullets, when loaded, do not seat into the powder column as do the 300 Win Mag, so offers a better, more uniform burn rate. Although Winchester’s 300 Magnum, introduced in 1963, with its shorter and more angular form became more popular, the 300 H&H still has a loyal following amongst the enlightened.

With modern brass and excellent bullet choice, the 300 H&H can be loaded to equal Winchester’s 300 Win Mag and has a lot more history and presence to it, making an ideal classic case for a retro rifle project. Medium to slow burning powders are needed for the 150-grain bullet weights up and also a magnum primer really helps in that long case design.

I have used classic Hollands and a David Lloyd in 300 H&H and both have been lovely rifles to shoot! The big 30 does not seem to kick as much as a Win Mag does, but that`s probably due to the slender case and rifle stock design.

Reloads were worked up in a CZ Safari, which wore a 24” barrel with an outside diameter at the muzzle of 0.68”, expanding to its maximum diameter at 1.22” at the receiver end, so a good weight to it to soak up some of the recoil generated by this classic big calibre. The 26” tube length is better but not always practical. It weighs a nice 10 lbs, sans scope, so recoil is also dampened, aiding in accuracy and reducing flinch.

The action is the tried and tested 550 series, derived from the Mauser 98 configuration, but in its magnum form to accommodate the longest cartridges. The classic square bridge receiver has 19mm dovetails to fit a scope as required and is finished in a deep satin bluing. The bolt is huge at 8.25” long and classically Mauser in design, with a large claw extractor that enables a controlled round feed from magazine to chamber, so you always know that a live round is going in and a spent case is coming out every time.

The stock is where the CZ Classic rifle really looks the part and handles as a true hunting arm! Made from fancy American walnut, with nice colour and straight-line grain, it’s not too elaborate, especially around the pistol grip area, which could weaken the stock. The straight comb design gives a good sight picture to the open sights, yet still allows competent scope use. Pleasingly, and under recoil, the rifle moves back in line and does not wallop your cheek. There is a dropped check piece, which is more visual than functional, as you could use this rifle either left or right handed if desired.

The action area is synthetically bedded to support the rifle’s action precisely, with two cross bolts to stop the stock splitting under recoil. Also befitting an African game rifle are the open sights, almost mandatory for close quarter dangerous game, the front has a white, high visibility bead and is hooded to protect it. Whilst the rear is an Express-type, with a fixed leaf set for 100 metres (not yards) and two folding leaves for 200 and 300 metres. A low powered scope, something like a 1-4x24 or 1.5-6x42 would however be most likely fitted to CZ’s proprietary rail.

New rifles like the CZ range and good performance ammunition from Hornady has rekindled people’s interest in old calibres and invigorated the African game market. Although the 300 H&H Mag is not a true large calibre, it is plenty potent for plains game and would make a great classic Red Stag rifle too. It is easy to load for and a flexible round, albeit assigned to long action use but it has so much more heritage than a 300 Win Mag and when loaded correctly, shoots as nicely. I feel a project rifle coming on!