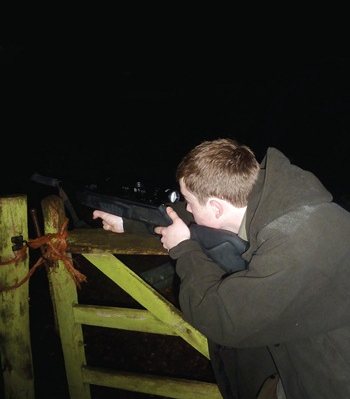 If any of you were following my (very) irregular series of articles on beginning airgun hunting, you’ll realise that it’s been about a year since my last article. This was down to school, family, exams, looking for work etc, have all played their part in keeping me out of the fields and woods.

Still, this hasn’t necessarily been a bad thing. I’ve realised that as your time gets a lot more limited, you appreciate what time you do get out in the field a lot more. As such, my hunting has seen a bit of a shake up. Previously, before I became so busy, my hunting was, to be honest, a bit slap dash. Yes, I was wearing camo, sometimes improvising hides and I had a rough idea of where particular species were on my permission, which consists of a tiny wooded valley, some fields and a couple of acres of woodland.

But with my time for hunting so severely limited I decided that this wasn’t enough. I needed to do something to make it more productive. So I made a few changes. Firstly, I’ve mapped my permission. This is something that all the professionals seem to do and from my experience all beginners should too. When I first got my permission, like many starting out, I was very keen to just get out shooting. The land owner showed me around and gave a couple of hints as to where he saw particular animals - such as a huge number of squirrels around a chicken coop. But that was about as far as I’d taken the concept of ‘mapping’.

However, I’ve recently taken the step of sketching out the terrain on a couple of sheets of A4 and then wandering about, mapping features like warrens, dreys, nests, where I see certain species and mapping all this with felt tip dots. The results have been surprising! On closer inspection, areas that I’d assumed were pretty empty of game turned out to harbour sizable rabbit and squirrel populations and fields that I’d always thought of as rabbit-only turned out to be home to far more pigeons (in the trees at the edge of the fields). Knowing all this means that I can adjust my tactics and approach for a certain area and in theory this should lead to bigger game bags.

As my low tech pen and paper mapping has been so useful I might investigate the BASC’s Green Shoots app, which allows you to keep an electronic register on what species you see where on your permission, as well as reminding you of your boundaries are. What’s more, any species that you shoot or see, and subsequently register on the app, is logged in the BASC database so that they can use it to build up a species map to aid them in their conservation work - and helping out with conservation work is something that all hunters should have a go at. That being said, if like me you’re a fairly low tech kind of person, then pen and paper mapping might be your best bet. I can barely turn a computer or smart phone on, let alone run an electronic mapping app!

I’ve also swapped my .22 for a .177. Whilst out on a hunt last November, I was trying to climb up a bank where (thanks to my mapping); I knew a sizable drey was located. The climb didn’t go to plan however and I ended up taking a pretty impressive fall. Once I’d dusted myself of and checked all my limbs were still in the right place I realized that my gun was lying a couple of metres away, looking dirty, but otherwise unharmed. However, when I looked through the scope it was another story. The mounts had held it in place, but somehow the cross hairs were on an angle, the turrets had been dented and the lenses were scuffed. Not being able to afford a new one, I did what all teenagers are good at and borrowed off my parents, in this case my dad. His air rifle of choice is a Browning Phoenix Elite and so with the aid of a cup of tea and some promises of extra housework, I convinced him to lend it me on my next hunt.

A couple of warm up shots to check it was zeroed and I was hooked. For a beginner like me, the flat trajectory of the .177 is a real bonus. Learning how to compensate for the more curved ballistics of a .22 takes some skill, and to be honest when you start shooting you can do without that sort of hassle! As I was zeroing, I actually began to wonder how many shots I’d missed in the field due to badly compensating for my .22? My new found love of the .177 was cemented by a cleanly killed rabbit at 30 yards - it was a shot that I’m not sure that I could have made with my .22 for the above reasons.

The last recommendation that I’d make for beginners is to investigate the company Pellet Perfect.

When I first got my air rifle, I simply zeroed it with the pellets that it came with and left it at that. But realizing how accurate I could be with my dad’s .177 I thought that it was worth wringing every ounce of accuracy out it I could by testing it with a variety of pellets. This is where Pellet Perfect comes in. For those of you who haven’t come across Pellet Perfect they sell small quantities of pellets (between 5 and 20) at around £1 a pop.

The low price means that you don’t have that you don’t have the expense of having to buy whole tins that you only use 10 or so of before realizing that they don’t group accurately enough. Instead for the price of a tin you can test four or five different brands. I personally found that Crossman Premier Domes shot best in the Browning, producing tight, 3-shot groups at 20 yards.

I suppose the key question for all of this is has it improved my performance in the field? To be honest, the answer is not enormously. But, as every hunter knows, the amount of game taken is one of the least important parts. Respect for your quarry (even when it’s considered vermin), improving your skills and understanding and respecting the ecosystem you are in are all far more important. However, even knowing this I was a bit annoyed. I’d put loads of effort into mapping, zeroing and generally improving my hunting skills - and yet there was no big improvement in the amount of game I was getting.

Then I realized something important. Although my quarry bags had not got significantly larger, my enjoyment had increased enormously since I’d started making the changes and that’s got to be the most important thing. I’ve recently applied for a shotgun licence and I’ve got another round of exams coming up, so my airgun hunting will probably go on hold for quite a while.

Still, as they seem to say on all the reality TV shows, it’s been an ‘incredible journey’ and I’ve really enjoyed my first year and a half of hunting! If you don’t already hunt with an airgun I’d certainly recommend getting out and having a go at it. Whether you’re new to shooting or a have been at it for years, try and get yourself out in the field with an air rifle. It will challenge you, frustrate you and you’ll probably come home empty handed fairly often. But it’s brilliant fun and you’ll come out of it a better hunter.