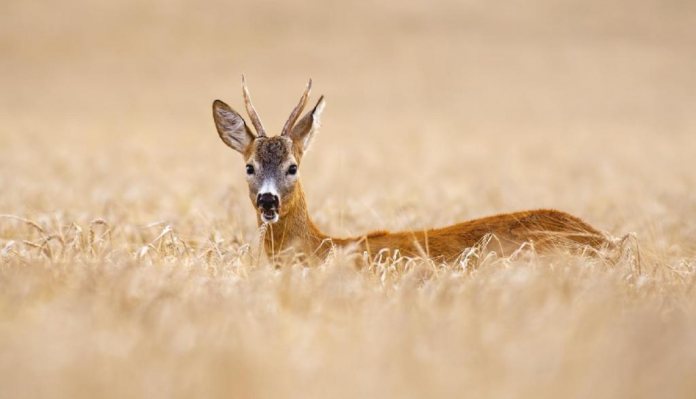 Sometime, in every stalker’s career, they will take a perfectly good shot, only to see the deer run off, deep into the undergrowth. The ‘bang and flop’ doesn’t always happen, although the short-range head or neck shot will, if correctly on target, ensure an on the spot kill! On my permissions, I have Muntjac, Roe and Fallow and, in my experience, it’s the last species that can run on most frequently from a solid heart/lung shot. I’ve had does run some 90m with a destroyed heart; clinically dead, but the arteries to and from it are still intact, so keeping the blood pressure up, allowing the deer to cover a lot of ground. Roe and Muntjac, given the same heart/lung shot, expire more readily, I suspect, partly due to the smaller size of the target organs. A decent bullet will destroy more vital tissue in percentage terms, as an example; just compare the size of a Fallow’s heart to that of a Roe or Muntjac’s much smaller organ.

The good news here is that with a heart/ lung shot, you should get a good blood trail, if shot with a reliably expanding bullet. If one is sure of a good strike, but you see the deer running strongly away, or find no sign of it through your thermal, the first thing to do is pause and pinpoint the area where the deer was standing when shot.

Either look up and get a bearing from the treetops, perhaps it was in line with the tallest tree behind, or possibly a feed bin or fallen tree can be identified on the ground. If a search looks to be necessary, I mark the ground where I’m stood with a branch or drag a heel through the mud to indicate the shot direction. If the search fails, one can then come back to the place from where the shot was taken and re-assess.

Next, is to range the shot, if not known already, so that you can pace out towards the strike area, stopping close to where it took place, as it’s easy to lose one’s bearings when walking the 100m or more over undulating or dead ground. If stalking in pairs, one should stay at the shooting point, directing the other stalker towards the right area to start a sweep. I will tie a blue nitrile glove to a branch to indicate the starting point of a search, which is easy to return to and start looking again. If you use a laser rangefinder to ping the deer before the shot, you then have an exact figure on the distance. From here and using your predetermined landmarks as to direction, you can march out, turn and ping your shooting position until you are pretty much on the exact range of the shot.

There may be hair (pins) around the area and some blood. However, it may not be a simple trail from there, often the blood flow stops after the initial strike, then starts again some meters away.

At the scene, you may be able to see frothy, bright red blood, indicating a lung shot, or white pins with little or no blood, indicating a low shot, the lighter hairs being belly or brisket hair. Dark red blood can point to a liver shot, green gut content shows the bullet struck further back and bone may point towards a bullet catching a foreleg. This information aids the search, in that the frothy lung blood indicates the deer will probably not be far, whereas the low, liver or gut shot animal may be some way off.

Unfortunately, a low bullet strike to a leg is not usually a fatal wound, and therefore the deer is not always found. Such a strike indicates the bullet is way off target and needs some careful thought as to why, before normal stalking activities resume.

Of course, if you stalk with a good dog, the search should be easier to resolve, as the dog picks up the deer trail. I shot with my Jack Russell at my side for 12 years; she always seemed to look at me at these times as if to say, come on stupid, surely you know the deer is this way, while trying to set off in pursuit. But let’s assume that you do not have the luxury of a hound.

You can cast around in a semi-circle, looking for the blood trail, but there is more to look for. A mortally wounded deer tends to run through undergrowth, not past or around it. Unusually bent ferns or hair on bramble indicating a single deer passed straight by can give a clue to the direction, as can scraped hoof prints in mud. Equally, it may not be able to run on all fours and drag a leg. If you do spot blood, then mark the location and move on. Once you get a definite direction, you may be able to predict the next blood splash and move a little faster towards the carcass. Also, move carefully and watch where you put your feet, as it’s all too easy to stand on the clues to its passage. Once found, you need to ensure that it’s dead before approaching of course, so look for chest or head movement. If none, approach from its rear and touch an eye with your sticks to make sure.

A deer shot at last light, which disappears into cover, is not a welcome situation, but I could make good use of my hand-held thermal at this point, which will light up its heat signature and enable the stalk to end there and then. However, I avoid this possible scenario if I can, by packing up well before it’s too dark.

If an initial search had come up with no sign of the animal, I would mark the site and return at first light. Once a wounded deer lies up for an extended period, it may well stiffen and be reluctant to rise again if approached, affording the stalker a chance of another shot. This method also applies during the day, although we all want a quick end to a stalk, it may be better to leave the area for a couple of hours for the deer to settle rather than chase it through the woodland and risk losing it altogether.

Having found the deer, you may need to take a dispatching shot; many close-up shots of 5 metres or less are missed! I’ll admit I’ve done it myself. If you have a variable magnification scope, wind it down to its minimum to enable a closer focus. Looking through it, the crosshairs will be typically 1.5 inches or 4 cm higher than a bullet will strike at this distance.

It’s easy to forget this in the heat of the moment, but when taking a ‘finishing off’ head shot at very close range, one will need to aim unnaturally high. A body shot may be difficult if the animal is lying down, but do not hesitate too much, or it may rise and run off again! Better a dead but poorly shot carcass than a runner you may struggle to catch up with. If the deer is not dead but unresponsive, there may be a case to finish off the animal with a knife. A deep cut across the throat and then the point of the knife into the middle of the atlas joint to sever the spinal cord will quickly end suffering. However, one needs to be familiar with the bone structure beforehand to carry out this last procedure effectively.

I’ve outlined woodland scenarios, but an especially difficult area to recover deer from is a field of crop. As an example, earlier this year I shot a young Fallow buck near the end of April, almost the end of the season. A group of six were in the wheat, which was about 70cm high. A spiker separated out, so I took him with a lower neck shot. The young buck went straight down, but the group were in a dip, with no features beyond as a reference. I thought I knew where it was, but had a 15-minute search, up and down the tramlines so I didn’t cause further damage to the wheat before I came across it, 20 meters further away than I had been looking.

Although I had ranged the shot, not being able to walk in a straight line towards it threw me. Even with a thermal imager, the buck was only visible from about 3 meters, as the crop hid the heat signature from the carcass. I think the only way to reliably find deer in this circumstance is by drone! (No, I don’t have one). Being well above, looking down, the carcass is easily found but even from a vehicle, looking out of a sunroof to gain height does not help much if the carcass is in a crop with height more than 50cm. The lone stalker needs to be extra careful in this seemingly easy environment.